MediaCityUK is a 200-acre (81 ha) mixed-use property development site at Salford Quays on the banks of the Manchester Ship Canal in Salford and Trafford, England. The project is being developed by Peel Media, and its principal tenants are media organisations. The land occupied by the development was part of the Port of Manchester.

The BBC signalled its intention to move jobs to Manchester in 2004, and the Salford Quays site was chosen in 2006. The Peel Group was granted planning permission to develop the site in 2007, and construction of the development, with its own energy generation plant and communications network, began the same year. Based in Quay House, the principal tenant will be the BBC, whose move marks a large-scale decentralisation from London. BBC Children's, BBC Radio 5 Live, BBC Research and BBC Sport are among the departments scheduled to relocate to the development. ITV's Granada division plan to move from their Granada Studios to MediaCityUK in 2012. The Studios on Broadway house seven high-definition studios, claimed to be the largest such facility in Europe.

MediaCityUK is to be developed in two phases. The 36-acre (15 ha) first phase was completed in 2011, and the second is dependent on its success. The Manchester Metrolink was extended to MediaCityUK with the opening of the MediaCityUK Metrolink station on 20 September 2010,[1] and further extensions are planned. Road access was improved by the construction of Broadway Link Road. 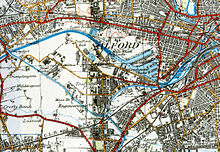 A 1924 map of Manchester Docks

Salford Quays, at the western end of the Manchester Ship Canal on the site of the former Manchester Docks, became one of the first and largest urban regeneration projects in the United Kingdom after the closure of the dockyards in 1982.[2] It forms part of an area known as The Quays, a joint tourism initiative between Salford City Council and Trafford Borough Council, which also encompasses Trafford Wharf and Old Trafford, on the Manchester side of the ship canal. As well as Salford Quays, The Quays development includes The Lowry Arts Centre and the Imperial War Museum North.[3]

A total of 200 acres (81 ha) of land have been earmarked for the development of MediaCityUK.[4] The first phase of MediaCityUK's development was primarily focused on a 36-acre (15 ha) site at Pier 9 of Salford Quays.[5] In 2010 it was announced that an ITV production centre would be built on Trafford Wharf in the Metropolitan Borough of Trafford.[6] 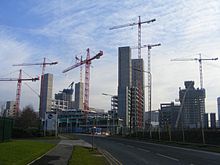 In 2003 reports emerged that, as part of the plans for the renewal of its Royal Charter, the BBC was considering moving whole channels or strands of production from London to Manchester.[7] Early discussions involved a plan where the BBC would move to a new media village proposed by Granada Television at its Bonded Warehouse site.[8][9]

Proposals to relocate 1800 jobs to Manchester were unveiled by BBC Director General, Mark Thompson, in December 2004. The BBC justified the move as its spending per head was low in Manchester, it had low approval ratings in the north and its facilities at New Broadcasting House needed replacing.[10][11] An initial list of 18 sites was narrowed to a short-list of four during 2005, two in Manchester – one at Quay Street, close to Granada Studios, and one on Whitworth Street and two in Salford – one close to the MEN Arena and one at Pier 9 on Salford Quays.[12] The site at Salford Quays was chosen in June 2006 and the move north was conditional on a satisfactory licence fee settlement from the government.[13]

The chosen site was the last undeveloped site at Manchester Docks, an area that had been subject to considerable investment and was emerging as a tourist destination, residential and commercial centre. The vision of the developers Peel Group, Salford City Council, the Central Salford Urban Regeneration Company and the Northwest Regional Development Agency was to create a significant new media city capable of competing on a global scale with developments in Copenhagen and Singapore.[4]

Salford City Council granted planning consent for an outline application for a multi-use development on the site involving residential, retail and studio and office space in October 2006[14] Further consent for a detailed planning application followed in May 2007.[15] In the same month, the BBC Trust gave its approval to the moving of five London based departments to the development.[16] The five BBC departments to be moved were Sport, Children's, Learning, Future Media and Technology and Radio Five Live.[17]

Construction started in 2007 with the site owner, Peel Group as developer and Bovis Lend Lease as contractor.[18] The media facilities opened in stages from 2007. The first facility being the Pie Factory, which was located in a refurbished bakery. It featured three large sound stages suitable for drama productions and commercials.[19][20] In January 2011 Peel Media received planning permission to convert on-site offices used by Bovis Lend Lease during the construction of the first phase into the Greenhouse.[21]

The first trial show took place in November 2010 in Studio HQ2.[22] The half-hour test show featured a power failure and a fire drill, which involved a full evacuation of the audience and crew.[22] The first programme filmed at MediaCityUK was Don't Scare the Hare in February 2011, and the first to transfer was A Question of Sport, the same month.[23] BBC employees started transferring to the development in May 2011, a process that will take 36 weeks. BBC Director General Mark Thompson confirmed that up to a further 1000 jobs could be created or transferred to the site.[24][25]

Channel 4 has expressed an interest in moving some activities to MediaCityUK.[26] The BBC has stated that either BBC One or BBC Two could move to MediaCityUK by 2015 if the confirmed moves are successful.[27]

Traditional street names are not used in the development. The main thoroughfares are styled blue, white, pink, yellow, orange, purple and green where street furniture and coloured ambient lighting will be colour-coded to match. A stylised map of the site has been devised. Landscape architects, Gillespies regenerated the brownfield site to create public spaces.[28] The focal point is a piazza and landscaped park, which stretches to the ship canal around which the buildings are located. The piazza's two distinct areas, The Green and The Stage are capable of holding events for up to 6500 people.[29] In front of The Studios are the foundations for a free-standing big screen, which will be viewable from the piazza when it has been commissioned.[30]

Construction of the BBC Centre at MediaCityUK in February 2010

The MediaCityUK footbridge at Salford Quays illuminated at night

The opening swing footbridge at Salford Quays links MediaCityUK with Trafford Wharf on the southern bank of the ship canal. It was designed by Wilkinson Eyre in association with Gifford. The bridge's main span is 213 feet (65 m) when open and provides a 157-foot (48 m) wide navigation channel accommodating ships' superstructures up to 66 feet (20 m) in height. The developers specified it to be “a unique and memorable landmark”. Its visibility is created by a curved bridge deck with an offset pivot mast and array of supporting cables in a fan or sail shape. It has seating benches and is lit at night.[41][42] The bridge, constructed with funding from the Northwest Regional Development Agency, is the final link in a circular walking route connecting the development with The Lowry and Imperial War Museum North. It was officially opened by Rowan Williams and John Sentamu, the Archbishops of Canterbury and York, and was opened to the public in May 2011 after landscaping works were completed.[43]

The development is powered by a gas-powered trigeneration energy plant producing electricity for cooling and heating using water from the ship canal. It is more than twice as efficient as conventional grid electricity and helped the development gain BREEAM sustainable community status.[30] The communications network is one of the most advanced in the world, with more than 20 million metres of fibre optic cable capable of delivering the internet speeds required for media production.[44]

The design of buildings at MediacityUK has been criticised by the editor of Building Design magazine, Ellis Woodman, who describes it as "a crazed accumulation of development in which every aimlessly gesticulating building sports at least three different cladding treatments. The overriding sense is one of extreme anxiety on the part of the architect. Quite how the BBC has stooped this low is hard to fathom."[45] The development was awarded the Carbuncle Cup by Building Design magazine for the worst new building in 2011.[46]

In total approximately 2,300 BBC staff will be employed at MediaCity.[47] In July 2010 it was announced that the BBC Breakfast programme would move to Salford Quays.[48] It is claimed that the development will create up to 10,000 jobs and add £1bn to the regional economy over 5 years.[49] In 2009 the BBC estimated that the move would cost up to £1 billion.[50] 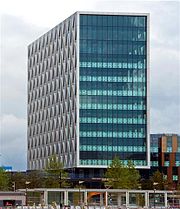 The Orange building houses the University of Salford Campus.

ITV was interested in relocating but negotiations with the developers, Peel Media, were abandoned in 2009 amid a financial dispute.[51] After a change of management at ITV, talks resumed in January 2010[52] and in December the decision to move to MediaCityUK was announced.[53] A production facility will be constructed on Trafford Wharf to house the Coronation Street sets that will be transferred from Granada Studios by 2013.[54]

There is a diverse mix of about 40 service companies, along with small companies offering ancillary services such as casting and camera hire, which occupy The Pie Factory and The Greenhouse.[19][55] Satellite Information Services (SIS), an occupant of The Pie Factory, will move production and engineering operations from London to manage the MediaCityUK Studios in a joint venture with Peel Media.[38] In 2011 SIS awarded a £3 million contract to S3 Satcom and SATCOM Technologies for the provision of a nine earth station broadcast teleport on Trafford Wharf which should enter service progressively during 2012.[56] Antix Productions moved into offices in The Greenhouse in 2011.[57]

The University of Salford moved its media-related teaching and research to the MediaCityUK site in October 2011.[58] The move will controversially cost the university more than £2.25 million in rent per annum until 2020.[59]

In 2008, Hope High School in Salford was taken over by Oasis Community Learning, an evangelical Christian organisation,[60] and renamed Oasis Academy MediaCityUK; its new premises in Salford Quays, on the edge of the MediaCity UK site, are scheduled for completion in September 2012.[61] 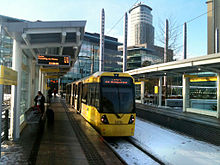 The MediaCityUK Metrolink station opened on 20 September 2010,[1] part of the Manchester Metrolink light rail system serving the development. It lies at the end of a 360-metre (0.22 mi) spur from the Eccles line, which was built as part of Phase 3 of the Metrolink expansion project. Trams will run to Cornbrook via Harbour City. Further expansion plans will see more lines added to the network in the next few years, including lines to Didsbury, Droylsden and Rochdale.[62]

Vehicular access to The Quays has been improved by the construction of Broadway Link Road, which links the site to the M602 motorway at junction 2, and by the provision of car parking. The high-rise 2116 space multi-storey car park was completed in August 2009. It is a pre-cast curved structure clad in a mixture of aluminium mesh panels and shaded aluminium tiles, comprising 11 floors of parking above the development's energy centre and commercial units.[63]