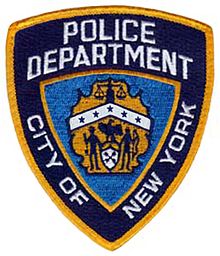 The New York City Police Department presents medals to its members for meritorious service.[1] The medals the NYPD awards are as follows (from highest medal to lowest):

(Solid green bar) is awarded for:

(Solid blue bar) is awarded for:

(Displayed wearing the MPD medal with a silver star in the middle) is awarded for:

(Displayed wearing the MPD medal with a green star in the middle) Awarded for:

The Meritorious Police Duty (MPD) is awarded for:

(Correct view is green on the left, white on right)

The department also awards a Purple Shield to those injured or killed in the line of duty. Various commemorative medals, unit citations, air crew wings, and a firearms proficiency breast bar for expert shooters have also been authorized.