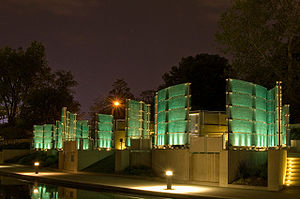 The Medal of Honor Memorial is a monument located in Indianapolis, Indiana, USA. It is dedicated in honor of all recipients of the Medal of Honor, the United States military's highest award for valor. The memorial was unveiled May 28, 1999, during Memorial Day weekend.

The Memorial is located on the north bank of the Central Canal, adjacent to Military Park (Indianapolis), and consists of 27 glass panels set in concrete bases. Indiana Limestone in shades of buff, gray, and pink are also a part of the monument. The panels are arranged into 15 walls, each representing an armed conflict in which a Medal of Honor was awarded. The names of the recipients are etched into the glass. At the time of dedication, there were 3,436 Medal of Honor recipients etched into the monument[1].

The Memorial also contains an elaborate lighting system that illuminates certain panels to correspond with a 30-minute audio tour that is played over a speaker system. The audio tour is made up of stories about the wars, and accounts of living Medal recipients. Many of the stories were recorded by Medal of Honor recipients.

After reading an article in the New York Times written about a June 1998 meeting in upstate New York about an annual meeting of the Congressional Medal of Honor Society, Chairman of the Indianapolis based IPALCO John Hodowal and his wife Caroline, were inspired to assist in the creation of a memorial to honor these individuals whose courageous acts earned them the Congressional Medal of Honor, the United State's highest military honor. The site that was chosen was the same area where Indianapolis's first recorded Independence Day celebration was held. Additionally, the site was utilized as a military camp during the U.S. Civil War[2].

Site preparation began in November 1998, and construction of the memorial began in January of 1999. 96 living Medal of Honor recipients attended the unveiling and dedication of the monument on May 28, 1999; the last Memorial Day of the millennium[3].

The designers of the monument were architect landscape artists Eric Fulford and Ann Reed of ROAMworks . IPALCO Enterprises sponsored the monument[4].

The Memorial received a 2001 Merit Award from the American Society of Landscape Architects[5].