Medal of Honor: Airborne is a World War II first-person shooter computer game and the 11th installment of the Medal of Honor series. It was developed by EA Los Angeles and was released worldwide on the PC and Xbox 360 in September 2007. A PS2 and Wii version was set to be released but was cancelled in 2007.[2] Instead, Medal of Honor: Vanguard was released. A PlayStation 3 version was released November 2007.[3] The game takes place in the European theater of World War II, and is the first in the series to focus only on paratrooper activities.[4]

In the single-player mode, the player takes on the role of PFC/CPL Boyd Travers, a fictional paratrooper in the US 82nd Airborne Division.[5] Missions include various insertions into Italy, northern France, the Netherlands and Germany, each one beginning with a jump behind enemy lines. Airborne also features a multiplayer mode available for online play, where users have the choice of fighting for the Allies and parachuting down to the battlefield, or fighting for the Axis and starting on the ground, defending the position from enemy paratroopers.

The game uses a massively improved version of Unreal Engine 3.[6] Airborne employs a nonlinear gameplay style whereby the player can start the game anywhere in the map by directing where they land, as opposed to previous linear FPS games where the start point and direction is already laid out, such as Allied Assault.[7]

The story begins with a brief training level, set in North Africa, but then takes you to the first mission: "Operation Husky", set in the Italian village of Adanti. Objectives include killing three German officers and assaulting a machine gun in the fortified Town Hall.

The next mission is set during the push to Rome, in an abandoned archaeological dig near Rome. Objectives here include destroying radio equipment, fuel tanks, and an ammunition dump.

The third is set on Omaha Beach, with the player inserting behind German lines to take out key objectives to prevent them being used against the invasion force.

The fourth is Operation Market Garden, in which the player inserts into Nijmegen and must battle his way through the destroyed town, to ultimately confront a Tiger tank at Nijmegen Bridge.

The fifth is Operation Varsity, which has the player destroying various targets, including tanks, a railway gun, and an armored train inside a German muntitions factory.

The final mission, Der Flakturm, has the player landing atop a partially destroyed flak tower (flakturm). He and his men must battle their way down, encountering heavy resistance, to place demolition charges and destroy it.

Each mission is introduced by a briefing cutscene at the beginning, and another cutscene takes place inside the aircraft, preparing to jump. Notable also is that each weapon in the game (including grenades) can be upgraded by killing enemies. More points are awarded for headshots and melee kills.

And finally, instead of facing standard enemies with randomized appearances and weapons, the player faces predetermined enemy types, ranging from the Italian Blackshirt to the SS Storm Elite. Harder enemy types are encountered as the game progresses.

The single player campaign includes six missions, each mission can be easily played in under two hours for a total of about 10-12 hrs of total game play.

Development of Airborne started in late 2004[8] when the game designers wanted a new game that would "really revolutionize the Medal of Honor scene".[9] The idea of a paratrooper-based gameplay came up and as such a free-roaming environment was needed, which became the key focus of the game. Each mission starts with a jump and the developers wanted to make the experience as nonlinear as possible, with no starting points and as such the scenario unfolding in a different way each time, as opposed to previous World War II FPS games where there is a set starting and end point.

The development team even had an actual historical advisor, who is an enthusiast on the Airborne forces and weapons of World War II, attempting to ensure historical accuracy and authenticity. Each sound was recorded from hundreds of real WWII-era artefacts including real weapons, tanks, and one of the last remaining airworthy C-47s.[10] 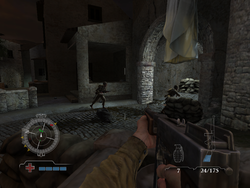 Allies about to advance on an Italian position in Operation Husky

Airborne was developed in close consultation with the Medal of Honor community, via forums and summits.[11] Certain community leaders who run Airborne fan-sites were invited to a multiplayer preview summit in July 2007, and many problems were identified that would hamper the game's popularity within the MOH community, the most important ones being lack of a dedicated server and issues with mouse lag and low frame rate. As a result of the summit, the most critical issues were able to be fixed in time for the game's release, and the other issues in time for the first patch.[12]

A single-player demo was released on August 23, 2007, featuring the first half of Operation Husky. This is the last (Medal of Honor) title based in the WWII era. [13]

Airborne uses a heavily modified Unreal 3 engine. The game's core development was started with EA's acquired Renderware engine, but it made the switch to the Unreal 3 engine in early 2006 which delayed the game by over a year.[14] The engine was specifically designed for DirectX 9 and 10 PCs, PlayStation 3 and the Xbox 360, and supports many rendering techniques utilized within the graphics capabilities of Airborne, including HDRR, per-pixel lighting and dynamic shadows.

Because of the non-linear gameplay style of Airborne, the developers had to build an entirely new artificial intelligence system to deal with the many ways the player can interact with or approach the computer-controlled allied and enemy soldiers (NPCs), and for them to react to the situation accordingly.[15] With "Affordance A.I.", the characters have an awareness of enemy approach patterns, and also features of the terrain and urban infrastructure that provide a tactical advantage, such as cover, high ground and open doorways. This allows AI characters to take intelligent combat actions based on their surroundings, as opposed to the scripted movements of previous linear FPS games. However, as players played through the levels, many said that the A.I began a scripted sequence of reactions; e.g., being in the same positions every time and/or using the same advantages even when the player takes the enemy on from a completely different angle. These scripted reactions left many gamers somewhat unimpressed by the supposed "Human A.I".[15]

Airborne uses two systems to guide the physical and emotional reactions of the AI characters to what is happening around them. "E-cap" (emotion capture) is used to create more human-like emotions on the characters' faces by blend an awareness of their surroundings and other NPCs, for example an AI soldier that started to move forward would jump back for cover if an ally next to him was shot.[16]

A version 1.1 patch was released by EA on October 5, 2007.[17] This patch enables players to join dedicated servers, as well as fixing various gameplay and multiplayer issues such as the damage dealt by anti-tank weapons such as the Panzerschreck. An update to this patch, version 1.1ds, was released on October 30, 2007, fixing several problems with dedicated server functionality.[18]

A second patch was released on December 13, 2007. The patch adds support for 24 players, edits various maps and adds two new ones, and balances the multiplayer weapons, bringing the total size of the patch to 1.3GB.

A third patch was released on March 7, 2008. This one adds new features and two new maps to the game and also edits various existing features. The updates' size is 1.1GB because of the 2 new maps and because all maps were edited to include Objective mode. The dedicated server released on the same time as patch 1.3 was a new build because patching the existing server is as big as a new one. It is also stated that a Linux version of the dedicated is being worked on and will be released soon.[19]

Medal of Honor: Airborne was released July 31, 2007. It features the in-game tracks and musical scores of the game, all of which were composed by the award-winning Michael Giacchino, who also composed scores for some of the previous Medal of Honor games, including the main theme for the whole series.[20] The Airborne soundtrack has been said to be based on the Medal of Honor themes of the past, but "brings a dark uncertainty that communicates the ominous journey of the first US Airborne combat troops".[21]

Upon reviewing the game, IGN awarded Airborne a rating of 7.9/10, saying that "Airborne, while not perfect, is definitely the best game in the franchise to come along in quite a while".[23] GameSpot awarded the game 7.0/10, saying "the single-player campaign doesn't get cooking until the last two levels, but those two levels combined with solid multiplayer make it worth enlisting in Airborne."[24] Press Start Online stated that Airborne was "a Medal of Honor game that's not only good, it demonstrates a level of imagination and innovation that's becoming increasingly rare in the genre".[25] As of November 1, 2007, Airborne has received a GameRankings average of 78% for the PC version[26], 75% for the Xbox 360 version[27]and PS3 version.[28]

PlayStation the Official Magazine gave it a 3.5/5, stating "Medal of Honor: Airborne is outrageously beautiful and among the best looking titles on the PS3." Most reviewers praised the music from the games that Medal of Honor, with IGN stating in particular that the title music, which was said to bring back some classic memories from Allied Assault and the starting music for Operation Market Garden for Campaign.[29]

End user ratings were generally positive, noting the same pitfalls as reviewers (such as the miniscule campaign length). GameSpot's user review average is a 7.7[30] and 6.9 on metacritic[31].