The Mechanics' Bank and Trust Company Building is an office building located at 612 South Gay Street in Knoxville, Tennessee, USA. Built in 1907 for the Mechanics' Bank and Trust Company, the building now houses offices for several law firms and financial agencies. The building's facade was constructed with locally-quarried marble, and is designed in the Second Renaissance Revival style. In 1983, the building was added to the National Register of Historic Places for its architectural significance.[1]

The Mechanics' National Bank was chartered in 1882, and moved into a building at what is now 612 South Gay that same year. Within a few months of opening, the bank's president, Thomas O'Connor, was killed in a notorious shootout. In 1907, after the bank reorganized as the Mechanics' Bank and Trust, it built the first three floors of the current Mechanics' Bank building. The Union National Bank absorbed Mechanics' Bank in 1922, and added the top two stories the following year. The building later housed a branch of the Hamilton National Bank (headquartered in the nearby Holston building). In the early 1980s, the building was home to the City and County Bank,[1] part of the Butcher banking empire, which collapsed in 1983 due to bank fraud.[2]

The Mechanics Bank building is a six-story (five floors and a mezzanine) rectangular building that measures roughly 145 feet (44 m) by 32 feet (9.8 m).[1] The building's facade (facing Gay Street) is constructed of locally-quarried Tennessee marble, while the sides and rear of the building are constructed of brick and reinforced concrete. The building originally consisted of three floors and a mezzanine. In 1923, two more floors were added, with the builders carefully following the original design scheme. An elevator penthouse was added to the roof several decades later.[1]

The design of the Mechanics' Bank building is derived from the Second Renaissance Revival style. Six Ionic capitals span the building's three-bay main floor facade, with the middle two capitals resting atop marble columns that flank either side of the recessed entrance. A heavy cornice separates the main floor facade from the facade of the upper floors. The main entrance is a high archway topped by a pedimental hood. The central bay of the upper floors' facade is recessed, with balustrades spanning the recess between the first and second floors and the third and fourth floors, and a stylized cornice with a central arm-and-hammer symbol (the Mechanics' Bank symbol) above the top floor.[1]

The interior of the building has been extensively remodeled, although some original features remain. The building's entry foyer contains pink marble walls, and two marble columns flank the lobby's central entrance. The lobby itself still retains some original marble wainscoting and plaster beams.[1] Nine columns border the two-story lobby of the first floor suite with crown molding and a large mezzanine above the original bank vault that has been remodeled and now serves the purpose of a kitchen. 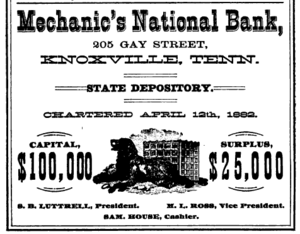 Early history of the property

The land on which the Mechanics' Bank building is now situated (612 South Gay Street) was originally part of the property set aside by James White and Charles McClung for Blount College (now the University of Tennessee) in the early 1790s.[3] The Bank of Tennessee (1812–1828) was the first financial institution to occupy the site.[4] During the Civil War, this bank's building was used as an office by the Union Army provost-marshal.[1] The building was then occupied by First National Bank (1864–1872) and its successor, the East Tennessee National Bank (1872–1882).[4]

In 1882, the East Tennessee National Bank moved to a new building, and the Mechanics' National Bank, chartered that same year, moved into the older building at 612 Gay Street.[4] The bank's first officers were Thomas O'Connor (president), Edward J. Sanford (vice president), and Samuel House (cashier).[4] In October 1882, O'Connor was killed in a shootout with Knoxville entrepreneur Joseph Mabry that took place in front of the bank. The shootout, in which Mabry and his son were also killed, made national headlines, and was mentioned in Mark Twain's book, Life on the Mississippi.[5]

During the 1950s, the top floor of the Mechanics' Bank building hosted the studios of radio station WROL-AM, which was known for its promoter and host, Cas Walker. The Everly Brothers were among the most well-known artists to perform regularly for the station during this period.[7]

In the 1970s, banking entrepreneur Jake Butcher acquired control of Hamilton National Bank, and renamed it United American Bank. The Mechanics' Bank building then became a branch of the City and County Bank, headed by Butcher's brother, C. H. Butcher.[1] In 1983, after federal investigators charged the Butcher brothers with bank fraud, the City and County Bank, along the other Butcher banks, collapsed.[2] The building has since been renovated as an office building.