A violent clash between Shia pilgrims and demonstrators and the Saudi Arabian security forces during the Hajj pilgrimage, which led to the deaths of over 400 people, occurred in Mecca on 31 July 1987. The event has been variously described as a "riot" or a "massacre." It arose from escalating tensions between Shia Iran and Sunni Saudi Arabia. Since 1981, Iranian pilgrims had held an annual demonstration against Israel and the United States,[1] but in 1987, a cordon of Saudi police and National Guards had sealed part of the planned demonstration route, leading to a confrontation between them and the pilgrims. This escalated into a violent clash, followed by a deadly stampede. There is a controversy regarding the details of the incident, with both Iran and Saudi Arabia laying much of the blame on the other side. Some sources claim the death toll from the incident was 402 people: 275 Iranian pilgrims, 85 Saudi police, and 42 pilgrims from other nationalities.[2] Other sources claim that more than 400 pilgrims had died, and thousands more injured.

There is a long history of tensions between Saudi Arabia and Iran. Muhammad ibn Abd al-Wahhab had initiated the destruction of various religious burial sites in Hejaz, and King Abdul Aziz Ibn Saud continued with this initiative, destroying parts of the Shiite-revered burial site of Al-Baqi' in 1925. This caused outrage in Iran, with the Iranian government calling for the ouster of ibn Saud, and banning Iranians from performing the pilgrimage in 1927.[3] In 1943, an Iranian pilgrim was beheaded based on Saudi charges that he brought excrement inside the Great Mosque on his garment. Iran lodged a formal protest, and suspended pilgrimage until 1948.[4]

For years, Iranian pilgrims had tried to stage demonstrations called "Distancing Ourselves from Mushrikīn" (برائت از مشرکين) in the Muslim holy city of Mecca during the hajj.[5] These demonstrations had their origins in 1971, when Ruhollah Khomeini instructed his Shiite followers to distribute political messages when performing their pilgrimage.[6] Even though a few Iranians were arrested for this act, the Saudi officials were generally apathetic, as they did not view these political messages to be a threat to the Saudi royalty.[7] The practice of distributing political messages, which were mainly criticism of the United States and Israel, as well as pro-Western governments, continued up until the year 1981.

In 1981, this was escalated into openly chanting political slogans in the Masjid al-Haram and the Prophet's Mosque, two of the holiest sites in Islam, resulting in violent clashes with Saudi security and one death.[1] In the same year, King Khalid of Saudi Arabia wrote a letter to Saddam Hussein saying "crush these stupid Iranians" as Saddam pushed on with the invasion of Iranian territory.[8] It has often been claimed that Iraq recruited non-Iraqi Arabs during the war to balance the far superior number of Iranian forces on the ground.[9]

In the following years, both sides tried to calm the situation: Khomeini urged his followers to maintain peace and order, not to distribute printed political material, and not to criticize Muslim governments. In return, Saudi officials reversed their earlier position and allowed two separate demonstrations to take place: One in Mecca, and the other in Medina.[10]

By 1986, the situation was calm enough for Saudi officials to re-open the sealed al-Baqi' cemetery for Shiite pilgrims, and in response, Khomeini’s representative formally thanked the Saudi King for the gesture.[11] However, on that same year, Iranian radical Mehdi Hashemi was accused of smuggling explosives on an airplane headed for Saudi Arabia, renewing Saudi fears.[12] Further adding to the tensions were the demands made by Mohammad Mousavi Khoeiniha in 1987 to allow the Iranian pilgrims to hold their demonstrations within the Great Mosque itself, and without the presence of security guards.[13] Khoeiniha had been earlier appointed as the supervisor and personal representative of Ayatollah Khomeini for Hajj affairs, but had been expelled from Saudi Arabia in 1982.[14] Even though Mehdi Karrubi, who was Khomeini’s official pilgrimage representative that year, tried to assure Saudi officials that the demonstrations would take place in the usual manner and in the agreed routes, it did little to quell the Saudi fears.[15]

Before the demonstrations started, Khomeini instructed the Iranian pilgrims to maintain peace and remain civil during the pilgrimage.[16]

On Friday July 31, 1987, the demonstration by Iranian pilgrims against the "enemies of Islam" (including the U.S. and Israel), started amid heightened security. The march was uneventful until towards the end of the planned route, where the demonstrators found their way blocked by Saudi riot police and National Guardsmen. At this point, some of the Iranians began to call for the demonstrations to press ahead and continue to the Great Mosque. While this was happening, unidentified persons began harassing the Iranian pilgrims by throwing bricks and other objects at them from a nearby location. These factors exacerbated the situation, escalating it into a violent clash between the Iranian pilgrims and Saudi security, with the Saudis reportedly using truncheons and electric prods and the Iranians using knives and clubs.[17]

The Saudi security reportedly opened fire on the demonstrators, a charge which Saudi officials deny. The rioting, and the resulting stampede caused a reported 402 dead (275 Iranians, 85 Saudis including policemen, and 42 pilgrims from other countries) and 649 wounded (303 Iranians, 145 Saudis and 201 other nationals).[18]

The details of the riot are controversial. Iranian officials maintain that the Saudis had fired on the protesters without provocation, and that the demonstrations had been peaceful. Saudi officials insist that no shots were fired, and that all deaths were caused by the melee and stampede.[19] 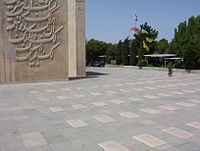 Memorial and Tombs of Victims in Iran

On August 1, 1987, a spontaneous demonstration by enraged Iranians ended with attacks on the Kuwaiti and Saudi embassies in Tehran.[20] On the same day, the Iranian leader Khomeini called on Saudis to overthrow the House of Saud to avenge the pilgrims' deaths.[21] In a Washington news conference, the Saudi ambassador Prince Bandar bin Sultan claimed that "not one bullet was fired," blaming the violence on the Iranian pilgrims who he accused of "brandishing knives, clubs and broken glass drawn from beneath their cloaks."[22] According to Dr. Robert O. Freedman, Professor of Political Science at Baltimore Hebrew University: "Later on, however, Iranian officials displayed the bullet wounds in the victims' bodies, which proved that the Saudis had indeed used firearms."[23] Robin Wright also reports that "Many of the Iranian bodies, shown to American and European reporters immediately upon their return to Tehran, had bullet punctures".[24]

Both sides took additional measures to bolster their view on the issue. Saudi Arabia severed ties with Iran and reduced the number of permitted Iranian pilgrims to 45,000, down from 150,000 in earlier years. Iran boycotted the Hajj for three years, from 1988 to 1990.[25]

In 1991, Iran and Saudi Arabia renewed diplomatic relations after coming to an agreement to allow Iranian pilgrims to perform the Hajj once more. The total number of pilgrims was set at 115,000, and the demonstrations were allowed to be held, but only in one specific location granted by the Saudis. Under this agreement, Iranian pilgrims continued their annual demonstration in the 1990s and 2000s with few or no incidents. They limited their rally to within the confines of their compound in Mecca.[26]