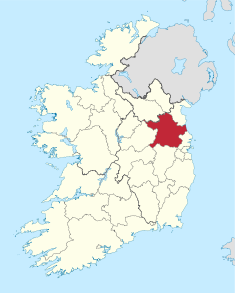 The area governed by the council

Meath County Council (Irish: Comhairle Chontae na Mí) is the local authority which is responsible for County Meath in Ireland. The Council is responsible for housing and community, roads and transportation, urban planning and development, amenity and culture, and the environment.[1] The head of the council has the title of Cathaoirleach. The county seat is at the County Hall, Navan.

The county council is governed by the Local Government Act 2001. The county is divided into five local electoral areas and has 29 councillors who are elected every five years by single transferable vote. The county administration is headed by a County Manager, currently Kevin Stewart.

This list reflects the order in which councillors were elected on 5 June 2009.

†Regina Doherty and Ray Butler were elected to Dáil Éireann in February 2011.[3][4] Accordingly their council seats became vacant and were filled by co-option.