From the very general considerations, the mean inter-particle distance is proportional to the size of the per-particle volume 1 / n, i.e.,

where n = N / V is the particle density. However, barring a few simple cases such as the ideal gas model, precise calculations of the proportionality factor are impossible analytically. Therefore, approximate expressions are often used. One such an estimation is the Wigner-Seitz radius

which corresponds to the radius of a sphere having per-particle volume 1 / n. Another popular definition is

corresponding to the length of the edge of the cube with the per-particle volume 1 / n. Evidently, the two definitions differ by a factor of

, thus one has to exercise care if an article fails to define the parameter exactly. On the other hand, it is often used in qualitative statements where such a numeric factor is either irrelevant or plays an insignificant role, e.g., 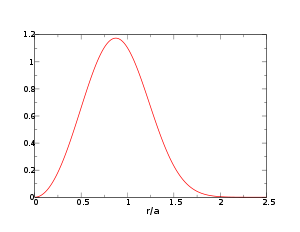 PDF of the NN distances in an ideal gas.

We want to calculate probability distribution function of distance to the nearest neighbor (NN) particle. (The problem was first considered by Paul Hertz;[1] for a modern derivation see, e.g.,.[2]) Let us assume N particles inside a sphere having volume V, so that n = N / V. Note that since the particles in the ideal gas are non-interacting, the probability to find a particle at a certain distance from another particle is the same as probability to find a particle at the same distance from any other point; we shall use the center of the sphere.

An NN particle at distance r means exactly one of the N particles resides at that distance while the rest N − 1 particles are at larger distances, i.e., they are somewhere outside the sphere with radius r.

, while the probability to find a particle outside that sphere is

. The sought-for expression is then

One can immediately check that

The distribution peaks at

or, using the t = x3 substitution,

where Γ is the gamma function. Thus,