American Dream seen from across the Hackensack River in Secaucus, NJ

American Dream Meadowlands (ADM) (formerly known as "Meadowlands Xanadu") is a retail and entertainment complex being constructed in the Meadowlands Sports Complex in East Rutherford, Bergen County, New Jersey, in the New York City Metropolitan Area. The first phase of the five-story complex is scheduled to open in Autumn 2013 and the second phase in Spring 2014. With 3,000,000 square feet (280,000 m2) of leasable area,[1] American Dream will be the second-largest combined entertainment, sports, and retail complex in the United States. It will be accessible via the Meadowlands Rail Line. 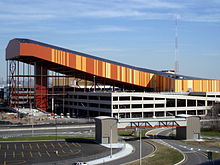 The exterior of the SkiDome

The project was officially approved in late 2003 as a joint venture between the former Mills Corporation and the Mack-Cali realty corporation. The project was billed by Mills chairman and executive officer Laurence E. Siegel as "...a new standard for bringing lifestyle, recreation, sports and family entertainment offerings together in one location."[2] Ground was broken on the complex on September 29, 2004,[3] and, at the time, was expected to open two years later.[4]

In late 2007, the parking garages were completed to alleviate the loss of the surface lots due to the project's construction. By 2008, the exterior was complete, as well as the structure for the indoor ski slope. By January 2009, 80% of the construction was completed, with construction still ongoing inside.

The former logo of the complex

In May 2009, construction on Xanadu came to a halt after a subsidiary of bankrupt Lehman Brothers missed payments, causing other lenders to withdraw from the project, and lost $500 million worth of construction funding. While developers stated the mall was 70% leased,[5] it is unknown how many retailers stayed leased while the mall was delayed. In August 2009, Cabela's, a major anchor, announced that it did not plan to open its Meadowlands location until late 2010.[6] Around the same time, the complex's website was relaunched with the new Xanadu Meadowlands name.

In 2010, Stephen Ross, a billionaire who owns The Related Companies in Manhattan, stated that he could finish the project by the end of 2010, possibly with a new name and look.[7] In May 2010, the managing of the mall was handed over to Related Companies, and the "Xanadu" name had been dropped, changing the name to "The Meadowlands".[8]

On August 10, 2010 Colony Capital surrendered control of the development of the mall to five lenders. A special governor's commission on the state's gaming and entertainment industry is filed recommendations to Governor of New Jersey. Four parties were noted to be interested in redeveloping the project.[9] The Wall Street Journal on December 24, 2010 reported that Triple Five signed a letter of intent to invest in and finish the stalled mall.[10]

The complex seen from the Meadowlands Sheraton

On February 1, 2011, after a record-breaking month of snow for the area,[11] a 50 to 60-foot long section of the eastern wall had buckled and a horizontal crease was apparent on the complex's indoor ski slope. Two days later, on February 3, after workers were attempting to melt snow from the ski slope's roof, ice build-up caused the eastern wall to fail and suffer a partial collapse along an approximately 150-foot (50 m) length of roof.[12] Michael Beckerman, a spokesman for the project’s lending group stated “the Lender Group is aware of the damage to the roof caused by excessive snow and ice, but does not feel the damage affects the integrity of the structure. As such, the group has filed an insurance claim, and once the weather turns warmer, it will assess the damages and fix whatever is necessary.”[13]

On April 29, 2011 Triple Five Group and the New Jersey Sports and Exposition Authority completed a deal, with Triple Five assuming ownership of the mall and renaming it to "American Dream Meadowlands", with an opening date of Autumn 2013, months before the Super Bowl XLVIII at MetLife Stadium, just across the highway. The deal was officially announced on May 3, 2011 and it was announced Triple Five had secured land across the highway from the mall to construct a domed theme park and water park, opening in the Spring of 2014.[14][15]

The exterior of the project, which is visible from the New Jersey Turnpike and New Jersey Route 3, is a combination of aluminum composite and aluminum siding, of various colors including turquoise, red, yellow, and green. The north end of the building contains the indoor ski slope. Most politicians and the public have equally criticized the building's appearance calling it "The ugliest building in New Jersey".[16][17] Former Acting New Jersey Governor Richard Codey was quoted in the New York Times as calling the structure "yucky-looking".[18] In response to Codey's criticism, and that of other vocal New Jersey leaders, the New Jersey Sports and Exposition Authority (which owns the land that Xanadu sits on) wrote in a letter to the developers that the NJSEA's Board of Directors has "widespread concerns with the current appearance" of the building.

Along with assuming ownership of the mall in late April 2011, Triple Five Group has stated they will redesign the exterior, painting it light blue and adding signage, lighting, and glass to make it look more appealing. 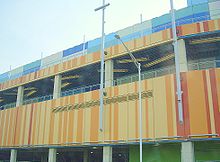 One of the parking garages that is part of the complex

The project will include many attractions, similar to the other Triple Five malls:

Announced in February 2008, the Pepsi Globe, a 287 ft (87 m) tall giant Ferris wheel, is to be constructed facing the NJ Turnpike. When completed, the 26 glass-capsule wheel would be the tallest in North America. Originally due to open in 2009, the project was then put on hold until 2010 to avoid construction interfering with the New Jersey Nets 2009-2010 season.[20] With the overall complex's delayed opening, the Pepsi Globe is also on hold. 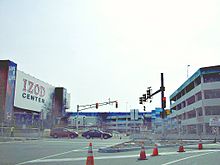 The project surrounding the Izod Center

This was the original plan of the mall, featuring "districts", as seen in Madrid Xanadú.

A sports-themed district. Attractions include:

An entertainment-themed district. Attractions include:

A district which will include children's stores, interactive games, and play areas. The district's planned name was "Children's Education" until February 2008 when it was changed into "Youth Culture." Attractions include:

A food & home district with restaurants include:

A fashion area would have most of the mall's stores, and an area for fashion shows. In the mall's site plans, there is room for a department/anchor store at this end of the mall.

American Dream will feature a GLA of 3 million sq. ft. and 8 anchor stores.

The mall will also feature 150,000 sq. ft. of restaurant space with indoor and outdoor seating. 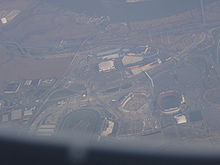 The mall under construction as seen from an airplane (April 19, 2008)

From traffic concerns to environmental concerns, there are many who have opposed the idea of building a permanent shopping center within the Meadowlands Sports Complex. The project is being built on state-owned land, and $81.3 million was spent on transportation improvements such as new off and on ramps and a train station at the Sports Complex.[18] Some have also called the mall a "colossal real estate nightmare"[26] and "perhaps the worst retail failure ever". [27]

The New York Giants had proposed that the mall be closed on days when the NFL team had home games, as part of the deal to build a New Meadowlands Stadium to replace Giants Stadium. The Giants then made an agreement with then-Xanadu to allow the complex to be open on game days, with the option to sue if traffic became a concern, an agreement which remains in effect now that the New Meadowlands Stadium will be co-owned with the New York Jets.

The complex was originally developed by the Mills Corporation in partnership with Mack-Cali Realty Corporation, with financing by Kan Am. In May 2006, the U.S. Securities and Exchange Commission (SEC) announced it was formally investigating the Mills Corporation after the company announced that it was restating four years of earnings due to executive misconduct and accounting errors. Later in the year, an analyst at Bank of America Securities pushed Mills Corporation to drop the project, citing significant cost overruns.[28] Subsequently, the troubled developer sold their stake in the mall project to private investment firm Colony Capital; the Mills Corporation collapsed soon after.

In January 2010, a report prepared by governor Chris Christie's transition team said that the complex “appears to be a failed business model” and that New Jersey needs to tell the owners to “open or surrender the property.” The report also stated that “There is no leasing plan making material on-site progress. The physical activities of construction are at a standstill, if not abandonment. The construction loan is out of balance. There are no monies readily available to finish construction of public areas or tenant improvements. Most, if not all, of announced major tenants have an ‘escape clause’ solely dependent on leasing — or lack thereof.”[27]