Me Nu was part of the war party along with Gen. Maha Bandula and her brother Maung O, the Lord of Salin, in Bagyidaw's court that advocated war with the British.[2] After the disastrous First Anglo-Burmese War (1824–1826) that left the country crippled, Bagyidaw became increasingly reclusive. Me Nu and her brother became de facto rulers of the country, and they much feared for their tyrannical rule. In February 1837, Crown Prince Tharrawaddy, brother of Bagyidaw, raised a rebellion against Bagyidaw, successfully forcing Bagyidaw to abdicate in April. Tharrawaddy put his brother under house arrest but executed Me Nu and her brother.[1]

Queen Me Nu had a son and a daughter with Bagyidaw. The son, Prince of Palaing, died young at 10 in April 1804. The daughter Princess Supayagale was a queen (Queen Hsinbyumashin) of King Mindon and mother of Burma's last queen Supayalat. 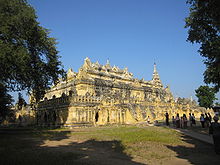