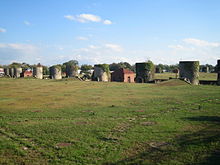 The District of Columbia government is considering redevelopment plans for the McMillan Park and sand filtration site which is no longer used for water treatment.

McMillan Park and Sand Filtration Site is a twenty-five acre green space and decommissioned water treatment plant in northwest Washington, D.C. connected to the McMillan Reservoir. It is bound on the north by Michigan Avenue, on the east by North Capitol Street, on the south by Channing Street and on the west by First Street. Two paved courts lined by regulator houses, tower-like sand bins, sand washers and the gated entrances to the underground filter cells provided a promenade for citizens taking the air in the park.

Below grade there are twenty catacomb-like cells, each an acre in extent, where sand was used to filter water from the Potomac River by way of the Washington Aqueduct. The purification system was a slow sand filter design that became obsolete by the late 20th century. In 1985 a new rapid sand filter plant replaced it across First Street beside the reservoir. The treatment system is operated by the Army Corps of Engineers.

Public access to the site has been restricted since World War II when the Army erected a fence to guard against sabotage of the city's water supply. Specially arranged biannual tours are supported by scores of visitors curious about the odd-looking structures.

In 1991, the D.C. Historic Preservation Review Board designated McMillan Park a Historic Landmark and nominated the site for the National Register of Historic Places. It included the site on their "List of Most Endangered Properties in 2000"[1] and again in 2005.[2] 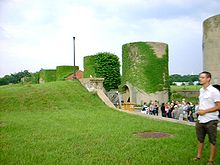 The 1905 completion of the McMillan Reservoir Sand Filtration Site was a Washington public health milestone. Its innovative system of water purification, which relied on sand rather than chemicals, led to the elimination of typhoid epidemics and the reduction of many other communicable diseases in the city.[3] A legacy of the City Beautiful Movement and an integral part of the McMillan Plan to modernize Washington, the complex is an engineering wonder that served its original purpose until 1986.

In 1906 Secretary of War William Howard Taft designated the site part of the McMillan Reservoir Park, a memorial to Senator James McMillan (R-Michigan), for his work as chairman of the Senate Commission on the Improvement of the Park System and his efforts in shaping the development of the city at the turn of the 19th century. After Taft became U.S. President, Congress officially designated the site as a park in March 1911.[4]

The park was conceived of as part of "a necklace of emeralds," large permanent reserves of open green space connected by trails that would ring the city. The site’s design and construction involved the leading civil engineers, urban planners, artists and architects including pre-eminent landscape architect of the time: Frederick Law Olmsted, Jr., engineer Allen Hazen, sculptor Herbert Adams and architect Charles Platt.

The site has been described as "an imaginative combination of landscaped park, with promenades, sculpture, curving carriage drives, careful grading and the placement of trees planned and personally supervised by Olmsted. The heirs of Senator McMillan personally financed the landscaping." [5] Crowning the park was a pink granite fountain, designed by Adams and Platt and dedicated in 1913 as a memorial to Senator McMillan. Featuring three nymphs representing faith, hope and charity, the monument was funded by contributions from every Michigan county. The fountain has since been removed.

Residents from the ethnically diverse neighborhoods near the park expressed their "delight in this rigidly segregated city in being able to enjoy its amenities regardless of race. Courting couples promenaded on the geometrically laid out avenues on the east site under a canopy of clipped trees, families on hot summer nights slept in the park to catch the summer breezes that blew over the escarpment, boys played ball games on the east portion where there were fewer manhole covers near Michigan Avenue. They laughed about sometimes falling through the center of a vault to the white sand beneath when a manhole cover had been left open."[6]

During the Corps of Engineers’ ownership, no commercial development of the site occurred. When the National Capital Planning Commission prepared the federal element of its first Comprehensive Plan in 1983, it included McMillan Park as among the "Parks, Open Space and Natural Features" of the city that "should be conserved and whose essential Open Space Character [be] maintained."[citation needed]

The site's future became uncertain, though, in 1986 when the Corps of Engineers declared the property surplus and asked the General Services Administration to dispose of it. GSA iterated its position that open space was not the highest and best use of the property, and insisted on selling the property for mixed commercial development over the objections of the McMillan Park Committee.[7]

The District of Columbia government purchased the site from the federal government in 1987 for $9.3M, in order to facilitate development. Since the time of purchase, the property has been vacant and has deteriorated severely due to lack of maintenance.

The D.C. government is again considering the McMillan Sand Filtration Site for commercial and residential development. The National Capital Revitalization Corporation (NCRC), a development agency created by the city, selected the site as part of a land swap deal involving Anacostia riverfront property and the construction of the Nationals Park baseball stadium. (The government dissolved the NCRC in 2007 and merged its functions into the Office of the Deputy Mayor for Planning and Economic Development.[8])

The government selected a development team, Vision McMillan Partners, in 2007.[9] Their proposal includes 1,200 units of housing with buildings up to 10 stories, a 100,000-square-foot (9,300 m2) shopping center, a 125-room hotel and conference center and underground parking. Limited open green space would remain.

Citizen groups have voiced objections, calling for maximum green space with appropriate repurposing. Different groups have lobbied for a museum, a library, a park, and a national memorial for dogs that died in war.[citation needed]