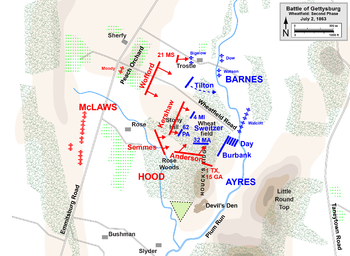 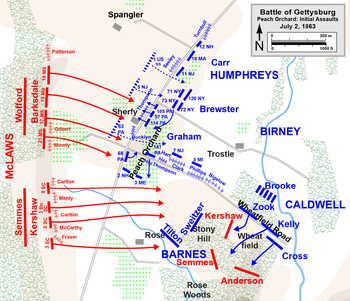 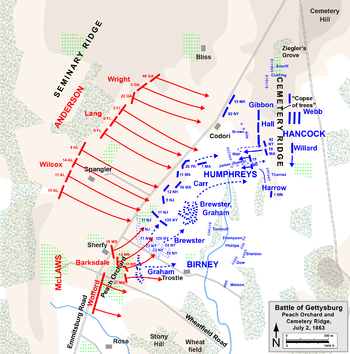 Barksdale broke Birney's line and wheeled into Humphrey's flank before Anderson's Assault commenced "at about a quarter to seven".[1]
Not to be confused with Hood's Assault.

McLaws' Assault[2] was a Battle of Gettysburg, Second Day, military engagement of infantry and artillery at the Stony Hill ("The Loop"), Excelsior Field, the Wertz & Sherfy houses, the Trostle Farm, and "momentous attacks and counterattacks in" The Peach Orchard[3] and The Wheatfield. Wheatfield engagements of 6 Confederate brigades versus 13 smaller Federal brigades involved 20,444 men with 30% casualties, including 500 Confederate killed.[4]

Following an afternoon skirmish when David B. Birney sent a small Union force westward from The Peach Orchard to Warfield Ridge that was repelled,[5] McLaws' Confederate force was positioned on Warfield Ridge (4 brigades: Kershaw, Semmes, Barksdale, & Wofford).[6]:152 Army of the Potomac command George G. Meade held a 3 pm corps commanders meeting[6]:391 then met at The Peach Orchard with Sickles,[2] whose units were at positions on 2 low converging ridges--"one from Devil's Den, the other along the Emmitsburg road"--which formed the "angle of the Peach Orchard".[7] "The Peach Orchard Salient" was formed by the northward line to the east of the Wertz and Sherfy houses, and the "Wheatfield Road line" extending eastward from The Peach Orchard past The Wheatfield to Houck's Ridge.[8]:300 The eastward line included ~6 p.m. reinforcements Meade had ordered that afternoon with four brigades of the II Corps, 1st Division (Zook, Kelly, Cross and in reserve, Brooke); and the Stony Hill was reinforced by two Union brigades of the 1st Division, V Corps.[6]:252

Lee planned concurrent assaults by Hood and McLaws,[citation needed] but while Hood began at 4 pm,[9]:10 Longstreet withheld McLaws until ~5 p.m. when Hood's Assault was reaching its limits and was fully engaged. Hood's Assault included the first engagement[when?] in The Wheatfield with Anderson's Confederate brigade from Houck's Ridge attacking the 17th Maine Volunteer Infantry Regiment (3rd Br, 1st Div, II Corps),[8]:275 which held its position behind a low stone wall with the assistance of Winslow's battery (Anderson fell back).[6]:246

Following an artillery dual with Union guns (e.g., Smith's battery at Devil's Den[7] and Ames' cannon in the orchard) counterfiring on Confederate artillery[6]:315 under Alexander on Warfield Ridge "stretching down to the crossing of the Emmitsburg pike",[7] Longstreet ordered McLaws to attack eastward. McLaws used sequential (en echelon) human wave attacks beginning with Kershaw's brigade crossing the Emmitsburg Road south of the Peach Orchard, followed by Barksdale's brigade on the North, and Wofford behind Barksdale into the Peach Orchard.[6]:153

By 5:30 p.m., the first of Kershaw's Confederate regiments[specify] attacking from Warfield Ridge eastward across the Emmitsburg Rd had neared the Rose farmhouse. The Union cannon and infantry firing southward from the "Peach Orchard were able to rake Kershaw's lines severely".[6]:315 At the Stony Hill, the 17th ME held against Kershaw's attack, but Barnes withdrew his understrength division[clarification needed] about 300 yards (270 m) northward to a new position near the Wheatfield Road. Trobriand and the 17th ME followed, and the Confederates seized Stony Hill and streamed into the Wheatfield.[6][verification needed]

After arriving ~6 p.m., Zook's and Kelly's brigades drove the Confederates from Stony Hill, and Cross' brigade cleared the Wheatfield, pushing Kershaw's men back to the edge of Rose Woods. Zook, Cross, and the Confederate Semmes were mortally wounded during these assaults; and when Cross's men had exhausted their ammunition, Caldwell ordered Brooke in reserve to relieve them.

Federals "held the peach orchard until nearly dusk" against Wofford's assault,[5] which continued eastward along the Wheatfield Road, taking Stony Hill and flanking the Union forces in the Wheatfield. Brooke's brigade in Rose Woods had to retreat in some disorder. Sweitzer's brigade was sent in and, "after an hour of fighting…Tilton and Swietzer's [brigades] certainly occupied the stony hill",[6]:252 effectively delaying the Confederate assault with hand-to-hand combat, but the Wheatfield was retaken.[10]:531

Ayres' V corps 2nd Division arrived from the northwest slope of Little Round Top[6]:392 by this time[when?] having crossed the Valley of Death under heavy Confederate sharpshooter fire[specify] from Devil's Den. Confederates swarmed over Stony Hill and through Rose Woods, flanking the advance of Ayres,[where?] who retreated back to Little Round Top despite pursuing Confederates and heavy casualties (829 of 2,613 engaged in 2 brigades).[10]:531-2[11][verification needed]

Meanwhile[specify] from Warfield Ridge on the west, Gen. Barksdale's brigades attacked eastward into 500 yards (460 m) of the Union line along the Emmitsburg Road from the Trostle lane south to the Peach Orchard. Humphrey's division had only about 1,000 Federals to cover the line (some were still facing south to fire on Kershaw's assault), and Barksdale's 1,600 Mississippians wheeled left against the flank and collapsed Humphrey's line, regiment by regiment.[clarification needed]

Wofford's attack on the Peach Orchard caused the Federal retreat from the orchard about dusk with Barksdale's 21st Mississippi Infantry Regiment passing through the orchard[6]:341 (instead of wheeling) and engaging the 2nd New Hampshire and along the road, Clark's 2nd NJ battery.[2]:380 After the 5th Massachusetts battery had retreated from the Wheatfield Rd line, the 21st MS engaged[2]:384 the 9th Massachusetts Battery farther east--which by that time, General "McGilvery had dismissed it with a “limber up and get out”" ("the 9th was the last to leave the Wheatfield Road line").[6]:341 Wofford's brigade advanced eastward along the Wheatfield Road, flanking "the Federal position[who?] in the Wheatfield"[4] after the ~7:30 p.m. Confederate advance through The Wheatfield.[citation needed]

Crawford's Pennsylvania Reserves had arrived from the Baltimore Pike to the northeast slope of Little Round Top after Sickles had been wounded, and the division was subsequently positioned on the northwest slope.[6]:392 At about 7:30 p.m, the Confederate advance through the Wheatfield continued eastward into the Valley of Death (Gettysburg) toward the Union line remaining from the earlier Battle of Little Round Top. After retreating federals passed Crawford's troops,[1] the Confederates were charged west of Little Round Top by Crawford's division at "double quick"[12]--along with Nevin's brigade[1]--led by McCandless' 3rd brigade (including[dubious – discuss] Gettysburg Company K in Talley's 1st Regiment) that drove the exhausted Confederates back beyond the Wheatfield to Stony Hill. Crawford established his line at the east edge of the Wheatfield.[6]:396-8[10]:535

Instead of "limber[ing] up", Bigelow's 9th MA had "retired by prolonge"[not in citation given] from the Wheatfield Rd northward to the Trostle Farm, stopping to fire the unlimbered cannon between periods of pulling them backwards, aided by recoil.[6]:341 On reaching the house, they were to cover the infantry retreat and were eventually overrun by the 21st MS:[8]:308-9 "more than half [of Bigelow's] men either killed or wounded, and his horses all shot down at the limbers-he was forced to leave four guns and retire. … In the meantime I formed a new line of artillery about 400 yards to the rear [east], close under the woods, and covering the opening which led [east to the rear] into the Gettysburg and Taneytown Road" (McGilvery report).[13] McGilvery's artillery "held Barksdale in check around the Trostle House for three-quarters of an hour after I had finished my half hour struggle, before Col. Willard came to his support" (1909 Bigelow letter).[3]

Graham's infantry brigade also retreated eastward toward Cemetery Ridge (the wounded Graham was captured by the 21st Mississippi),[8]:298 and as Barksdale's men pushed toward Sickles's headquarters near the Trostle barn, Sickles was wounded "soon after 6 o'clock"[7] during his staff retreat to the east (Birney assumed command of Sickles' defeated III Corps).[8]:301[11] The final advance of McLaws' assault was the 21st MS, which "pushed past the Trostle Farm" eastward until the 21st commander ordered his isolated troops to withdraw.[13]

Despite McLaws defeating the Third Corps, the Union retreat to the fishhook positions at Weikert Hill and the south end of Cemetery Ridge provided a defense which the Army of Northern Virginia avoided on the Battle of Gettysburg, Third Day. The resultant section of the July 3 Confederate line after McLaws Assault was used for the southern end of Longstreet's Assault (e.g., a portion of the artillery barrage was from The Peach Orchard). A Confederate area farther south was later successfully defended during the battle of South Cavalry Field that included a Union cavalry charge led by William Wells on July 3.

Dead in the Valley of Death were stacked up to 3 bodies high before being buried nearby on July 5[14] (Union remains were reinterred in the Gettysburg National Cemetery.) Medal of Honor recipients for action against McLaws' Assault included Lt James J. Purman, Sgt James M. Pipes[2]:379 and Sickles. By 1865, the anonymous Historicus attempted to rebut criticism of Sickles' Gettysburg deployment and defeat, and in October 1865[15] and June 1882 John B. Bachelder held memorial association era reunions for officers to identify points of McClaw's Assault.[16] Numerous Gettysburg Battlefield memorials and monuments were placed to commemorate units of the assault[4] (e.g., Excelsior Brigade in 1888.)[5] The Loop had been named at the Stony Hill by 1893,[6] and during the commemorative era, several Gettysburg National Military Park avenues were named for the Union commanders: Ayres (1907), Birney, Brooke (1907), Crawford (1895),[17] de Trobriand, McGilvery, and Sickles. The former[when?] Outside Wheatfield Road south of The Peach Orchard was surveyed in 1893 at the southern side of the area of McClaw's Assault.[17]:'00[18] Bigelow issued a 1901 correction to Bachelder's Trostle Farm map[6]:343 and initiated a 1909 effort (denied by the Gettysburg Park Commission) to rename the Trostle Lane from the generic United States Avenue to "Hunt Avenue" or "McGilvery Avenue".

Crawford purchased land at the Valley of Death and, until the First Army Appropriations Act of 1917 acquired the tracts, "Crawford's Glen"[19] provided a right-of-way for the Gettysburg Electric Railway. The trolley line crossed the McClaw's Assault area from the Sherfy House to the Wheatfield Rd, Wheat-field Park, Wible's Woods, The Loop, Tipton Station, and the Round Top Station terminus despite losing the US v. Gettysburg Electric Ry case in the Supreme Court. The Wheatfield was used for postbellum military camps in 1886, 1888, & 1928; and The Peach Orchard acquired in 1906 has been replanted several times (a jar of the 1863 peaches remained until after 1937).[7]