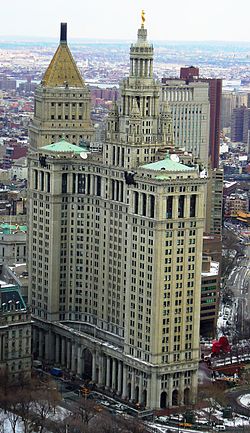 McKim, Mead & White was a prominent American architectural firm at the turn of the twentieth century and in the history of American architecture. The firm's founding partners were Charles Follen McKim (1847–1909), William Rutherford Mead (1846–1928) and Stanford White (1853–1906). The firm was a major training ground for many other prominent architects -partners, associates, designers and draftsmen.

McKim and Mead joined forces in 1872 and were joined in 1879 by White who, like McKim, had worked for architect Henry Hobson Richardson. Their work applied the principles of Beaux-Arts architecture, the adoption of the classical Greek and Roman stylistic vocabulary as filtered through the Parisian Ecole des Beaux-Arts, and the related City Beautiful movement after 1893 or so, which aimed to clean up the visual confusion of American cities and imbue them with a sense of order and formality during America's Gilded Age.[1]

Mead was the last of the firm's founding partners to die in 1928, after McKim (1909), and White (1906).[2] The firm retained its name after the death of Mead, until partner James Kellum Smith's death in 1961. The firm – primarily Smith – designed the prominent National Museum of American History in Washington, D.C., one of the firm's last works, opening in 1964.[3] McKim, Mead & White was also involved with an urban renewal project at Pratt Institute in Brooklyn in the 1950s and designed three buildings as part of the project: DeKalb Hall, ISC Building and North Hall.[4][5]