F-4 Phantom II non-U.S. operators are the non-U.S. nations with air forces that operate or used to operate the McDonnell Douglas F-4 Phantom II. The Phantom II entered service with the U.S. military in 1960 and served until 1996. During this time it was the primary interceptor, air superiority fighter and fighter bomber with the U.S. Navy, Marines and Air Force.

The Phantom II was exported to eleven other nations, and continues to serve in a military role in some parts of the world.

In March 1963, McDonnell Douglas offered to provide the RAAF with a modified version of the F-4C, the model 98DX, fitted with SNECMA Atar 9 engines. This engine was already used in the RAAF's Mirage IIIOs, but the French turbojet was inferior to the General Electric J79, and the RAAF chose instead to order the F-111C Aardvark which had a greater range.[4]

The solution was to loan F-4Es to the RAAF, under the Peace Reef programme. On 22 June 1970, the contract was signed, and the first of 24 new F-4Es arrived the following September. They served with Nos. 1 and 6 Squadrons, both based at RAAF Base Amberley. The Australian aircrews praised the choice and the F-4Es were so well received that their popularity threatened the F-111C order at one point.

In 1972 the United States offered to sell the leased aircraft to Australia. Earlier the Americans had offered to sell 48 aircraft, including RF-4Es if the RAAF had cancelled the F-111C. On balance the F-4 would need to be supported by eight KC-135 Stratotankers to achieve the endurance required in Australian service with in-flight refuelling, making the whole package uneconomical compared to the F-111C with its greater range. Also, acquisition of the Phantom would have required disbanding at least one Mirage squadron in order to provide the necessary aircrew (No. 82 Wing's aircrew were to be converted to the F-111). The F-111C programme was resumed in December 1971.[5]

One Phantom (69-7203) was lost in an accident during Australian service off Evans Head, New South Wales during night bombing practice on 16 June 1971, while the others went on to follow a long career with the United States Air Force, with 21 examples later modified to F-4G Wild Weasel specifications and used mainly by the 35th TFW.[4]

The Al Quwwat al Jawwiya il Misriya (Egyptian Air Force or EAF) encountered Israeli F-4s during fighting between the two states, especially during the later stages of the War of Attrition and the 1973 Yom Kippur War. These encounters gave the EAF a measure of the type's effectiveness, especially as a bomber.

After the Camp David Accords, and the Israel-Egypt Peace Treaty signed on March 26, 1979, Egypt ended its military dependence on the Soviet Union. It also lost the financial support of the other Arab states, and Saudi Arabia cancelled its plans to send Egypt 50 F-5s. The U.S. State Department proposed trading Egypt new military hardware in exchange for military aircraft made in the USSR, including MiG-21s, and the newer MiG-23s delivered to them by the Soviets prior to their breakdown of relations in 1976.[6]

Under the September 1977 Peace Pharaoh agreement, 35 ex-31 TFW F-4Es along with a number of Sparrow, Sidewinder and Maverick missiles were supplied to the EAF for US$594 million and served with 76 and 78 Squadrons of the 222 Fighter Regiment.[7] Initially Egyptian ground crews found their maintenance far more complex than required for Soviet aircraft and consequently there was an average of only nine F-4s serviceable during 1982, a 26% serviceability rate. To correct the situation, Egypt considered selling some of the F-4s to Turkey and buying extra F-16s. However, assistance from U.S. advisors in 1985 made it possible to reach a reasonable serviceability rate, and in 1988 another seven F-4s were delivered.[7] While further purchases of F-4s and upgrades were considered, these plans were rejected in favour of additional orders for F-16s.[7]

By the end of the 1990s, three aircraft had crashed but were replaced with three others.[8] Two squadrons of F-4s are still in service with the 222nd Regiment.[9] 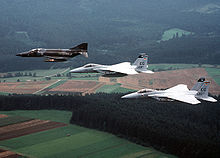 A German F-4E used for training at Holloman Air Force Base, 1992.

In 1971 the new West German Luftwaffe was only 16 years old, having been reformed in 1955. In this short time, the air force had already passed through two generations of jet combat aircraft, having bought the F-86 Sabre and the F-104 Starfighter.

By the early 1970s the Luftwaffe had a formidable fighter strength, consisting of two interceptor, two reconnaissance and five bomber wings with F-104Gs, plus four light attack wings with Aeritalia G.91Rs.[11]

The first F-4 model to enter German service was the RF-4E. The Luftwaffe signed a contract with McDonnell Douglas for 88 RF-4Es in 1968; at the time the biggest order outside the USAF. The contract included industrial offsets for German industry, particularly production work for Messerschmitt-Bölkow-Blohm who manufactured and supplied F-4 components to McDonnell Douglas' Phantom production facility in St. Louis.[10]

On 16 January 1971 the first RF-4E, dubbed the "Spirit of St. Louis", flew from the U.S. to Spain and finally onto Germany. The next day, at Bremgarten, the aircraft was accepted by the Inspekteur der Luftwaffe ("Inspector of the Luftwaffe", Gunther Rall.[12]

In 1972, with eight Phantoms per month being delivered, Aufklärungsgeschwader 51 "Immelmann" equipped with the RF-4, followed by AG 52, based at Leck.

The German RF-4E was equipped similarly to the USAF RF-4Cs, using the latest F-4E airframe and more-powerful engines. The RF-4Es were employed as day/night reconnaissance aircraft, equipped with four cameras covering 180 degrees.[11] There were special flares for night use and two night/all-weather reconnaissance systems. One was the IRRS (Infrared Recognition System) and the other was the SLAR (Side-Looking Airborne Radar), mounted in the side of the fuselage. The aircraft had the capability to develop photos in flight and then drop them using special cartridges. Missions were generally flown at low level and high speed, using the installed APQ-99 radar for navigation. Deliveries were completed in May 1972 and the previously-employed RF-104Gs were modified to serve in strike or fighter units.[11]

The Luftwaffe also intended to equip two fighter and two bomber geschwaders ("wings") with a simplified single-seat version of the F-4E Phantom which had already been proposed for the TFX USAF program. This was reconsidered due to the cost of that version and instead, under the Peace Rhine program, the Luftwaffe purchased the F-4F, which was based on the F-4E.

The F-4F had one of the seven fuselage fuel tanks omitted along with the capability to carry AIM-7 Sparrow missiles and bombs. It was equipped with air combat maneuvering leading edge slats and had a higher thrust to weight ratio, approaching 1:1 when fuel was low. The first example, serial number 3701, first flew on 18 March 1973. The first eight were sent to George AFB where crew training was carried out. In 1976, these trainers were replaced with 10 F-4Es, which stayed in the U.S. One of the "F"s, serial number 72-118, remained at Eglin AFB as an experimental project aircraft.[11] Units equipped with F-4F included Jagdgeschwader 71 "Richthofen", Wittmund, commencing in May 1974, and Jagdgeschwader 74 "Mölders", Neuburg[disambiguation needed

Weapons used on the F-4F included the Mk 82 retarded bomb, BL755 cluster bomb unit and AIM-9 Sidewinders.[11] Later on, an AGM-65 Maverick capability was added, with a pair of missiles housed in a single launcher.

Luftwaffe aircrew training was conducted by the USAF at Sheppard AFB. The program included 13 months flying the T-37 and T-38, for a total of 200 hours for pilots and 85 hours for navigators.

Training in Europe was limited to a minimum of 500 ft (150 m) altitude, with special ranges permitting flight as low as 200 ft (60 m). Advanced training was conducted in Canada at CFB Goose Bay and at Decimomannu in Sardinia.[11]

Reconnaissance Phantom updates were carried out during several separate programs. Under the Peace Trout program, one RF-4E upgrade had an ELINT system installed in the nose, based on the APR-39 of the F-4G. Another RF-4E update was the installation of provision for bombs with up to six BL-755, or 5,000 lb (2,268 kg) of other external stores, and an ALE-40 chaff launcher along with a bombing system and newer cameras. In 1988, the aircraft were stood down from this dual role due to cost and this capability was removed.[13]

After the reduction of conventional forces in Europe, the Luftwaffe began phasing out the RF-4Es in 1993–94. The surplus aircraft were supplied to Allied NATO nations, with 32 sent to Turkey and 20 to Greece. AG 51 received Panavia Tornados as a replacement, while AG 52 was disbanded.[10]

An F-4F with a Panavia Tornado

12 F-4Fs were initially modified for dual controls and were later de-modified. In 1980–83 the F-4F fleet was fitted with air-refuelling probes, utilizing USAF tankers to make longer flights to Canada and Spain. The AIM-9B and F were replaced with the "L" version Sidewinder.

The "ICE" (Improved Combat Efficiency) program commenced in 1983 to upgrade the F-4F's air-to-air capabilities. This involved the APG-65 radar and AIM-120 AMRAAM as the main elements, along with many minor upgrades. The original plan was to upgrade 75 F-4Fs, but the number was increased to 110 in the late 1980s. Initially the ICE upgrades were intended only for the interceptor wings, but more were upgraded due to delays in the Eurofighter Typhoon program.[10] 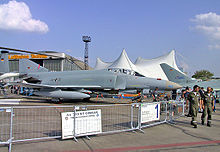 The F-4Fs were employed to fill operational gaps twice; the first time due to Panavia Tornado delays, while the F-4F ICE was needed due to the Eurofighter Typhoon delays. The units equipped with F-4F ICE were JG 71, JG 72, JG 74 and JG 73. This latter was a mixed unit, sent to Preschen airbase and had one staffel of F-4s and one with MiG-29s. This was a unique situation, until the phasing out of the Fulcrums.[15]

The F-4F ICE program offered a reasonably inexpensive and capable aircraft for the interceptor role, albeit with limitations. Apart from natural deficiencies of the air frame design itself, the greatest drawbacks of the F-4F ICE are the missing IFF system and the non-existent MIDS capability. In beyond-visual-range scenarios, it therefore has to rely on target-identification by AWACS aircraft with which it has to communicate in a conventional voice-based manner. This together with the low number of procured AIM-120Bs (only 96, because Germany has ordered the MBDA Meteor, which however will not be available until 2013) and the outdated APG-65 radar makes it a rather defensive system.

In 1992–94 the EFA program was reviewed by German Defence Minister Volker Rühe and there was extensive debate about the Luftwaffe's future. At the end of 1994, there were about 70 F-4F ICE aircraft already modified, 40 were still waiting for APG-65 radar, and 40 were not modified but still in service. The costs sustained in the upgrades had incurred a delay in AMRAAM acquisition. At that time, it was hoped that the AIM-120 could be received by 2005 and then there were only funds for 96 missiles with an option for 288 more. The program review considered ending F-4F conversions and buying new fighters as "gap fillers", such as the MiG-29, F-15 Eagle or F-16. There was doubt that even a simplified version of the Typhoon could be acquired.[16] The review resulted in F-4F ICE being completed. The lack of AMRAAMs was a serious handicap and the MiG 29s were retained for longer than had been planned.