Ricky McCormick's encrypted notes are two hand-written documents found in the pockets of murder victim Ricky McCormick when his body was discovered in a field in St. Charles County, Missouri, on June 30, 1999. Attempts by the FBI's Cryptanalysis and Racketeering Records Unit (CRRU) and the American Cryptogram Association failed to decipher the meanings of those two coded notes, which are listed as one of the CRRU’s top unsolved cases.[1] On March 29, 2011, the U.S. Federal Bureau of Investigation issued an appeal for help from the public in obtaining the meaning of the messages. A few days later, they updated their website to note the "outpouring of responses", and established a separate page[2] where the public can offer comments and theories.[3][4]

Ricky McCormick was a high school dropout who had held multiple addresses in the Missouri/Illinois region in St. Louis, Belleville, and Fairview Heights, sometimes living off and on with his elderly mother.[5] According to a 1999 article in the St. Louis Post-Dispatch, McCormick suffered from chronic heart and lung problems. He was not married, but had fathered at least four children. He had a criminal record, and had previously served 11 months of a three-year sentence for statutory rape. At the time of his death, he was 41 years old, unemployed, and on disability welfare.[6]

His body was found in a cornfield in St. Charles County on June 30, 1999, by someone driving along a field road near Highway 367, near West Alton, Missouri.[7] The reason for him being 15 miles from his current address is another mystery, as McCormick did not own a car, and the area is not served by public transportation.[8] The body had already decomposed somewhat, and no official cause of death was ever determined, though an identification was obtained via the body's fingerprints. The death was not labeled a homicide, there was no indication that anyone had a motive to kill McCormick, and no one had reported him missing. The last place that McCormick had been seen alive was five days earlier, on June 25, 1999, at the St. Louis Forest Park Hospital, where he was getting a checkup.[5]

News stories in 1999 did not mention anything about cipher messages, which were not announced until 12 years later when the FBI listed the death as a murder, and posted a notice for help on the main page of their website. Investigators believe the notes in McCormick’s pants pockets were written up to three days before his death.[9]

The two notes are written in an unknown code consisting of "a jumble of letters and numbers occasionally set off with parentheses" and are believed by the FBI to possibly lead to those responsible for the killing. Dan Olson, chief of the F.B.I.’s Cryptanalysis and Racketeering Records Unit, said, illustrating the significance of the notes, "Breaking the code could reveal the victim’s whereabouts before his death and could lead to the solution of a homicide.”[3][5] Attempts by both the FBI's Cryptanalysis and Racketeering Records Unit (CRRU) and the American Cryptogram Association failed to decipher their meaning, and Ricky McCormick’s encrypted notes are currently listed as one of CRRU’s top unsolved cases, with McCormick's killer yet to be identified.[1] According to members of McCormick's family, McCormick had used encrypted notes since he was a boy, but apparently no one in his family knows how to decipher the codes, either.[10] 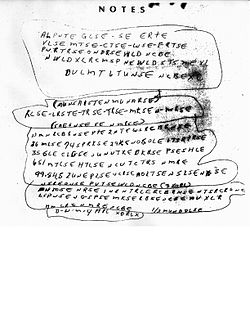 The FBI has had so many responses with suggestions for the cipher, that they later requested helpers do not call by phone or use email.[11] An FBI news release has stated, "This story has generated an outpouring of responses. To accommodate the continuing interest in this case, we have established a page [12] where the public can offer their comments and theories about the coded messages."[13]