Maat or maʻat (thought to have been pronounced *[muʔ.ʕat]),[1] also spelled māt or mayet, was the ancient Egyptian concept of truth, balance, order, law, morality, and justice. Maat was also personified as a goddess regulating the stars, seasons, and the actions of both mortals and the deities, who set the order of the universe from chaos at the moment of creation.

The earliest surviving records indicating Maat is the norm for nature and society, in this world and the next, was recorded during the Old Kingdom, the earliest substantial surviving examples being found in the pyramid texts of Unas (ca. 2375 BCE and 2345 BCE) [2]

Later, as a goddess in other traditions of the Egyptian pantheon, where most goddesses were paired with a male aspect, her masculine counterpart was Thoth and their attributes are the same. After the rise of Ra they were depicted together in the Solar Barque. As Thoth has been seen to represent the Logos of Plato,[3] so Maat has been viewed as an expression of Divine Wisdom.[4]

After her role in creation and continuously preventing the universe from returning to chaos, her primary role in Egyptian mythology dealt with the weighing of souls that took place in the underworld, Duat.[5] Her feather was the measure that determined whether the souls (considered to reside in the heart) of the departed would reach the paradise of afterlife successfully.

Pharaohs are often depicted with the emblems of Maat to emphasise their role in upholding the laws of the Creator.[6]

Maat as a principle

Maat as a principle was formed to meet the complex needs of the emergent Egyptian state that embraced diverse peoples with conflicting interests. The development of such rules sought to avert chaos and it became the basis of Egyptian law. From an early period the King would describe himself as the "Lord of Maat" who decreed with his mouth the Maat he conceived in his heart.

The significance of Maat developed to the point that it embraced all aspects of existence, including the basic equilibrium of the universe, the relationship between constituent parts, the cycle of the seasons, heavenly movements, religious observations and fair dealings, honesty and truthfulness in social interactions.[7]

The ancient Egyptians had a deep conviction of an underlying holiness and unity within the universe. Cosmic harmony was achieved by correct public and ritual life. Any disturbance in cosmic harmony could have consequences for the individual as well as the state. An impious King could bring about famine or blasphemy blindness to an individual.[8] In opposition to the right order expressed in the concept of Maat is the concept of Isfet: chaos, lies and violence.[9]

In addition to the importance of the Maat, several other principles within ancient Egyptian law were essential, including an adherence to tradition as opposed to change, the importance of rhetorical skill, and the significance of achieving impartiality, and social justice. In one Middle Kingdom (2062 to c. 1664 BCE) text the Creator declares "I made every man like his fellow". Maat called the rich to help the less fortunate rather than exploit them, echoed in tomb declarations: "I have given bread to the hungry and clothed the naked" and "I was a husband to the widow and father to the orphan".[10]

To the Egyptian mind, Maat bound all things together in an indestructible unity: the universe, the natural world, the state, and the individual were all seen as parts of the wider order generated by Maat.

The underlying concepts of Taoism and Confucianism resemble Maat at times.[11] Many of these concepts were codified into laws, and many of the concepts often were discussed by ancient Egyptian philosophers and officials who referred to the spiritual text known as the Book of the Dead.

Maat and the law

There is little surviving literature that describes the practice of ancient Egyptian law. Maat was the spirit in which justice was applied rather than the detailed legalistic exposition of rules (as found in Mosaic law of the 1st millennium BCE). Maat was the norm and basic values that formed the backdrop for the application of justice that had to be carried out in the spirit of truth and fairness. From the 5th dynasty (c. 2510-2370 BCE) onwards the Vizier responsible for justice was called the Priest of Maat and in later periods judges wore images of Maat.[12]

Later scholars and philosophers also would embody concepts from the wisdom literature, or Sebayt.[13] These spiritual texts dealt with common social or professional situations and how each was best to be resolved or addressed in the spirit of Maat. It was very practical advice, and highly case-based, so that few specific and general rules could be derived from them.

During the Greek period in Egyptian history, Greek law existed alongside Egyptian law. The Egyptian law preserved the rights of women who were allowed to act independently of men and own substantial personal property and in time this influenced the more restrictive conventions of the Greeks and Romans.[14] When the Romans took control of Egypt, the Roman legal system which existed throughout the Roman Empire was imposed in Egypt.

Scribes held prestigious positions in ancient Egyptian society in view of their importance in the transmission of religious, political and commercial information.[15]

Thoth was the patron of scribes who is described as the one "who reveals Maat and reckons Maat; who loves Maat and gives Maat to the doer of Maat".[16] In texts such as the Instruction of Amenemope the scribe is urged to follow the precepts of Maat in his private life as well as his work.[17] The exhortations to live according to Maat are such that these kinds of instructional texts have been described as "Maat Literature".[18]

Maat as a goddess

Maat was the goddess of harmony, justice, and truth represented as a young woman,[21] sitting or standing, holding a was scepter, the symbol of power, in one hand and an ankh, the symbol of eternal life, in the other. Sometimes she is depicted with wings on each arm or as a woman with an ostrich feather on her head.[22] Depictions of Maat as a goddess are recorded from as early as the middle of the Old Kingdom (c. 2680 to 2190 BCE).[23]

The sun-god Ra came from the primaeval mound of creation only after he set his daughter Maat in place of Isfet (chaos). Kings inherited the duty to ensure Maat remained in place and they with Ra are said to "live on Maat", with Akhenaten (r. 1372-1355 BCE) in particular emphasising the concept. Some of them incorporated Maat into their names, being referred to as Lords of Maat,[24] or Meri-Maat (Beloved of Maat). When beliefs about Thoth arose in the Egyptian pantheon and started to consume the earlier beliefs at Hermopolis about the Ogdoad, it was said that she was the mother of the Ogdoad and Thoth the father.

In the Duat, the Egyptian underworld, the hearts of the dead were said to be weighed against her single "Feather of Ma'at", symbolically representing the concept of Maat, in the Hall of Two Truths. A heart which was unworthy was devoured by the goddess Ammit and its owner condemned to remain in the Duat. The heart was considered the location of the soul by ancient Egyptians. Those people with good and pure hearts were sent on to Aaru. Osiris came to be seen as the guardian of the gates of Aaru after he became part of the Egyptian pantheon and displaced Anubis in the Ogdoad tradition.

The weighing of the heart, pictured on papyrus in the Book of the Dead typically, or in tomb scenes, shows Anubis overseeing the weighing and the lioness Ammit seated awaiting the results so she could consume those who failed. The image would be the vertical heart on one flat surface of the balance scale and the vertical Shu-feather standing on the other balance scale surface. Other traditions hold that Anubis brought the soul before the posthumous Osiris who performed the weighing.

The earliest evidence for a dedicated temple is in the New Kingdom (c. 1569 to 1081 BCE) era, despite the great importance placed on Maat. Amenhotpe III commissioned a temple in the Karnak complex, whilst textual evidence indicates that other temples of Maat were located in Memphis and at Deir el-Medina.[25] 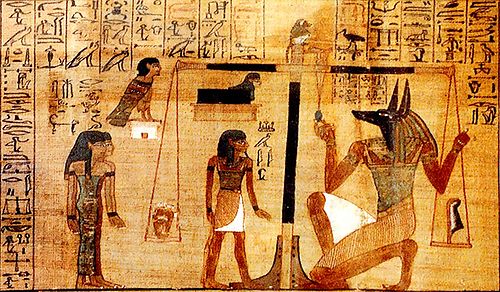 One aspect of ancient Egyptian funerary literature which often is mistaken for a codified ethic of Maat is Spell (Chapter) 125 of the Book of the Dead or Papyrus of Ani (known to the ancient Egyptians as The Book of Going Forth by Day). The lines of this spell are often collectively called the "Forty-Two Declarations of Purity" or the Negative Confessions. These declarations varied somewhat from tomb to tomb and so cannot be considered a canonical definition of Maat. Rather, they appear to express each tomb owner's individual conception of Maat, as well as working as a magical absolution—misdeeds or mistakes made by the tomb owner in life could be declared as not having been done, and through the power of the written word, wipe that particular misdeed from the afterlife record of the deceased.

Many of the lines are similar, however, and they can help to give the student a "flavor" for the sorts of things which Maat governed — essentially everything, from the most formal to the most mundane aspects of life.

The doctrine of Maat is represented in the declarations to Rekhti-merti-f-ent-Maat and the 42 Negative Confessions listed in the Papyrus of Ani. The following are taken from public domain translations made by E. A. Wallis Budge in the early part of the 20th century; more recent translations may differ in the light of modern scholarship.