North York
This article is about the dissolved municipality in Toronto. For other uses, see North York (disambiguation).

North York is a dissolved municipality within the current city of Toronto, Ontario, Canada. Geographically, it comprises the central part of the northern section of Toronto. As of the 2006 Census, it has a population of 635,370. The official 2001 census count was 608,288. Until 1998, it was the second-largest of six municipalities that comprised another larger municipal structure called Metropolitan Toronto. The previous year, the provincial Government of Ontario passed legislation to merge these municipalities into a single, new amalgamated City of Toronto. North York is one of the most diverse areas of Toronto, as it contains some of the most affluent areas of the city (The Bridle Path, Hogg's Hollow, York Mills, Willowdale, Bayview Village) and some of the poorest (Jane and Finch, Flemingdon Park and Lawrence Heights).

Originally, North York was known as a regional agricultural hub composed of scattered villages. The area boomed following World War II, and by the 1950s and 1960s, it resembled many other sprawling North American suburbs. Of note is the community of Don Mills.

On August 10, 2008, a massive explosion occurred at the Sunrise Propane Industrial Gases propane facility just southwest of the Toronto-Downsview Airport. This destroyed the depot and damaged several homes nearby. About 13,000 residents were evacuated for several days before being allowed back home. One employee at the company was killed in the blast and one firefighter died while attending to the scene of the accident.[1] A followup investigation to the incident made several recommendations concerning propane supply depots. It asked for a review of setback distances between depots and nearby residential areas but didn't call for restrictions on where they can be located.[2]

North York residents are highly multicultural. In 2006, 57% of North York's residents were not born in Canada, and 52% were classified as belonging to a visible minority:[3]

Chinese cultural groups dominate the eastern half of North York making up 22% of the population from Yonge Street to Victoria Park Avenue. The neighbourhood with the largest percentage of Chinese people in North York is the Aspenwood area in Hillcrest Village with 57%.

Black Canadians dominate the western half of North York making up 19% of the population past Allen Road. Most of North York's Black community are along Jane Street and areas around it. Smaller areas such as Jane and Finch, Lawrence Heights, and Trethewey had more than 40% of its population identified as Black. Most are West Indians but there is also a large Black African population. The Jane & Wilson neighbourhood has the largest Ghanaian community in Toronto. The neighbourhood with the largest percentage of Black people in North York is the Black Creek area in Amesbury with 45%.

West Asians and Arabs concentrate in the eastern half of North York. Additionally, Iranians have a distinctive presence on the north end of Yonge Street. There is also a large percentage of Middle Easterns along Don Mills Road. The neighbourhoods with the largest percentage of Middle Easterns in North York is Graydon Hall and the Shaughnessy area in Don Valley Village with 17%.

Filipinos are centred around Bathurst Street making up 10% of the population of the neighbourhoods along Bathurst in North York. The Bathurst & Wilson area will soon officially be the first Little Philippines in Canada. Flemingdon Park also has a sizable Filipino community. The neighbourhood with the largest percentage of Filipino people in North York is the Neptune area in Lawrence Manor with 24%.

Although non-visible minorities are slowly declining over the years moving into the suburbs, Europeans still show a significant presence. The largest European community in North York are Italians, most of whom are elderly[citation needed]. Most live in the houses in the western half of North York and , from Bathurst Street to Weston Road. Jewish Canadians are centred around Bathurst Street which has the largest Jewish community in Toronto. Russians make up a large percentage of the population along the northern end of Bathurst Street between Sheppard Avenue and Steeles Avenue. The area is also the largest Russian community in Toronto, and is sometimes referred to as "Little Moscow". Old generation Canadians dominate the southern end of North York from Bathurst Street to the west, Leslie Street to the east, Highway 401 to the north and Lawrence Avenue to the south. The largest percentage of non-visible minorities in North York is Old Orchard in Ledbury Park with 92%.

The following is a list of reeves and mayors of North York. 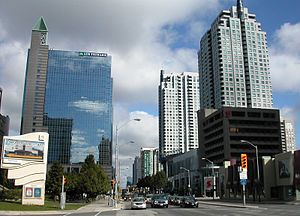 Photograph of Yonge Street in downtown North York taken outside the Toronto Centre for the Arts. 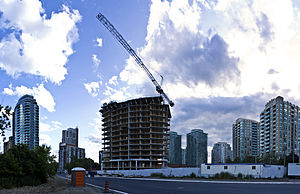 While much of the area still retains a suburban nature, efforts led by former Mayor of North York and Toronto Mel Lastman were made to intensify development in the North York Centre area along Yonge Street between Finch and Sheppard Avenues, coinciding with the path of the Toronto Transit Commission's Yonge subway line.

There are many stores and high-rise office and condominium apartment buildings along this central North York corridor, particularly centred around the old North York City Hall. Directly beside the old City Hall is the Toronto Centre for the Arts. Thanks to a new subway line along Sheppard Avenue, more high-rise condominiums are being built along the Sheppard East corridor.

The central area is gradually ceasing to be suburban, resembling a smaller version of the city's downtown. Major corporations have built their own office towers along Yonge Street in central North York, including the Canadian head offices of Procter & Gamble, Nestlé, Cadbury Adams, Lindt & Sprüngli, Equifax, and Xerox, while the Government of Canada maintains offices north of Sheppard Avenue. McDonald's of Canada is also located in North York, although not along this corridor. This particular area is the region in the foreground of this photograph.[4] Many more office and condo towers have sprouted in the area of this photo since it was taken.

The section of Highway 401 which traverses North York is the busiest section of freeway in North America, exceeding 400,000 vehicles per day.

In the 1980s, the administration of Mel Lastman transformed North York. The former North York City Hall looks out upon a reflecting pool. Directly south of the city hall in the same complex is the former North York Board of Education building (now home to the Toronto District School Board. To the north and east of the complex are two large malls connected by an underground passage with subway access. The northern mall is connected to the North York Central Library, the largest full-service Toronto Public Library building in Toronto (second to Metro Reference in square footage). The library is a part of a much larger facility including a school board work station, swimming pool, snack bar, veterans centre and large hotel, the rooms of which look onto the inside of the mall. The more recently-built eastern mall (called "Empress Walk") is built around a large multi-storey cathedral-like hall and contains an Empire Theatres movie theatre and a Loblaws supermarket.

North York is the northern extent of the Carolinian forest zone.

An aircraft manufacturing facility and a former military base are located at Downsview. With the end of the Cold War, much of the land was transformed into a large park now called Parc Downsview Park. Also located in the former airfield is Toronto Aerospace Museum.

Along North York's Bathurst Street is one of the world's largest urban Jewish communities, with a significant population of Holocaust survivors.

A small plaza containing Chinese restaurants and supermarkets is located at the intersection of Finch Avenue and Leslie Street. It first developed in the 1980s to serve the ethnic Chinese community, though its patronage has now diversified.

There are a multitude of North York sports clubs including the North York Storm, a girls hockey league, Gwendolen Tennis Club in the heart of North York near Yonge and Sheppard, and the venerable North York Aquatic Club, which was founded in 1958 as the North York Lions Swim Club and has produced many Olympian swimmers. 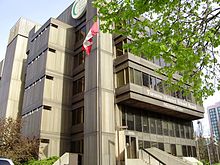 TDSB Education Centre, the headquarters of the Toronto District School Board

Before the formation of the TDSB, the North York Board of Education served North York.