Though focusing on serving the local Chest-Mont area in which it is located, the firm has tried cases in nearly all 50 U.S. states, including death action claims in nearly a dozen states.

Founded in 1963, The Mayerson Law Offices, P.C., has concentrated on litigation pertaining to obtaining merited compensation for clients damaged, injured, permanently disabled, or killed due to companies' or individuals' wrongdoing and/or carelessness, or by unreasonably dangerous products, with both personal cases and high-profile class action suits.[4] The compensation and personal injury lawyers at the Chester County, Pennsylvania law firm are life-long victims' rights attorneys and recognized experts in personal-injury litigation.[5][6]

The firm has been located in The Meeting House Law Building & Gallery, formerly known as the Vincent Mennonite Church, a former Mennonite Meeting House, since 1976. The land itself has been occupied since 1719, and the site, located on Mennonite Church Road at Schuylkill Road (Pennsylvania Route 724) in Spring City, has been occupied by landmark historical church buildings since at least 1750.[7] The current building, erected in 1889, houses the law firm, plus a museum space, and gallery to be known as The ImaginAIRium. Several works by noted Chester County artist Melvin Goldfield are on display in the current gallery portion of the building’s Great Room. The law firm intends to continue operating in the three-story addition after the museum portion opens to the public. The building shares its grounds with an historical multi-denominational cemetery known as Vincent Mennonite Cemetery and Rhoad's Burying Ground, where grave markers date as far back as 1759 and 1760.[8][9]

The Mayerson Law Offices, P.C., is primarily known as a casualty-oriented, victims' rights law firm, with specialties in obtaining suitable compensation necessitated by auto, truck, tractor-trailer, and motorcycle accidents and crashes, drunk drivers, defective and/or unreasonably dangerous products (product liability), and insurance policy holder disputes, as well as a variety of other circumstances.[10][11] 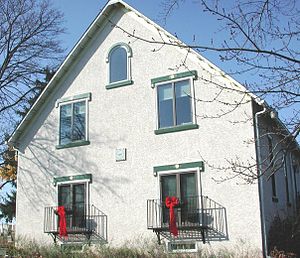