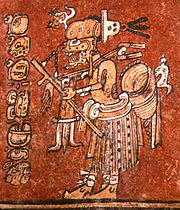 God A way as a hunter, Classic period

In recent narratives, particularly in the oral tradition of the Lacandons, there is only one death god (called "Kisin" in Lacandon), who acts as the antipode of the Upper God in the creation of the world and of the human body and soul. This death god inhabits an Underworld that is also the world of the dead. As a ruler over the world of the dead (Metnal or Xibalba), the principal death god corresponds to the Aztec deity Mictlantecuhtli. The Popol Vuh has two leading death gods, but these two are really one: Both are called 'Death', with only the prefixes ('One' and 'Seven') being different. They were vanquished by the Hero Twins.

The two principal death gods count among the many were-animals and spooks (wayob) inhabiting the Underworld, with the God A way in particular manifesting himself as a head hunter and a deer hunter.

Kisin is the name of the death god among the Lacandons as well as the early colonial Choles[1], kis being a root with meanings like 'flatulence' and 'stench'. Landa uses another name and calls the lord of the Underworld and "prince of the devils" Hunhau,[2] a name that, recurring in early Yucatec dictionaries as Humhau and Cumhau, is not to be confused with Hun-Ahau; hau, or haw, means 'to end' and 'to lay on its back (mouth up)'.[3] Other names include Yum Kimil 'Lord of Death' in Yucatán and (Ah) Pukuh in Chiapas. (Ah Puch, though often mentioned in books about the Mayas, does not appear to be an authentic Maya name for the death god.)[4]

In the Popol Vuh, the Hero Twins descend to the 'Place of Fright' (Xibalba) where a pair of Death Gods, Hun-Came 'One-Death' and Vucub-Came 'Seven-Death', rule over a series of disease-bringing deities. They defeat the Death Gods and put restrictions on their cult.

According to one of the earliest sources on Maya religion (Francisco Hernández 1545), Eopuco (i.e., Ah Pukuh) mistreated and killed the Bacab, who revived three days later.[5]

Both God A and God A' figure prominently in the New Year rites depicted in the Dresden Codex. God A' probably corresponds to the death god Uacmitun Ahau in Landa's description of the New year rites. He presides over a year of great mortality. To ward off evil during this year, men would walk over a bed of glowing embers that possibly represented the fires of the Underworld.[7]

God A in the lunar eclipse tables of the Dresden Codex

The death god classified as God A always has a fleshless skull with usually a skeletal body. He occurs in the following contexts.

With varying hieroglyphic names and attributes, God A figures in processions and random arrays of were-animals and spooks (wayob).[8] In connection with these apparitions, he tends to be depicted either as a head hunter or as deer hunter (see figure). On the grandiose Tonina stucco wall, the severed head is that of an enemy king. The death god's deer hunt has two sides. On the one hand, this deer hunt may metaphorically refer to a hunt for human victims. On the other hand, there also seems to be a connection with certain wayob shaped like deer but with the tail of a spider monkey. On the famous peccary skull from Copan, for example, such a deer way appears to be welcoming the death god returning from a hunt.

Together with the Rain Deity, God A is present at the jaguar transformation of a man (possibly a hero) who is usually shown as a baby, and who seems to disappear into the Underworld.

On a Copan bench, the earth-carrying Bacabs are paired off with death gods. This may relate to the fact that in Yucatán, one of the four Bacabs was called 'White Death' (Zaccimi).

The other codical death god is God A', corresponding to Landa's Uac Mitun Ahau, and characterized by a black stripe over the eyes and a 'darkness' infix in the forehead. Just like death god A, he figures among wayob.[9] Instead of being a head hunter, however, God A' is a demonic apparition often shown in the illusionistic act of self-decapitation. He may also assume the shape of a blowfly or of a firefly carrying a torch. It has been suggested that the hieroglyphic name of God A' should be read as Akan, although this name is otherwise only known as that of a 16th-century deity of alcoholic beverages.[10]

A text from the early colonial songbook of Dzitbalche states the Underworld (Miitnal) to be opened and Kisin (Cizin) to be liberated during the concluding twenty days of the year (Uayah-yaab).[11] In the Classic period, the head of the skeletal God A serves as (i) the hieroglyph for the day Kimi 'Death', corresponding to Kame' in Quiché, also the name of the paired rulers of Xibalba in the Popol Vuh; (ii) the hieroglyph for the number Ten (lajun), perhaps because the verbal stem laj- means 'to end'; (iii) a variable element in glyph C of the Lunar Series, registering one to six completed lunations, probably for the prediction of lunar eclipses. Apparently connected to this, God A can be depicted with the attribute of a crescent that seems to mark him as a lunar patron deity.[12] A vignette of God A (or perhaps his female counterpart) illustrates the lunar eclipse tables of the Dresden Codex (see figure).