Mount Tomorr is a large mountain in southern Albania. Its highest peak, called Çuka e Partizanit, reaches a height of 2,416 m (7,927 ft). It is located east of the towns of Berat and Poliçan and the river Osum not far from the Canyon of Osum river.

In antiquity the region of Tomorr (Greek: Άμυρον Amyron) was inhabited by the Dexari, a tribe of Epirus that belonged to the Chaonian group.[1][2] 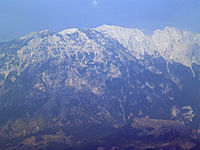 Albanian folklore tells how Tomorr came to be. The people believed that Tomorr was a giant that wanted to fight another giant named Shpirag for a young woman. The two giants killed each other and when hearing this the young woman cried and drowned in her own tears thus creating the river of Osum.[3]

Tomorr is of great importance to the local people where a Bektashi religious temple can be found, and offering them many facilities such as skiing. For its importance and beauty the Albanian Government declared Tomorr a National Park. Tomorr Mountain National Park (Albanian:Parku Kombëtar i Malit të Tomorrit) covers an area of 4,000 hectares. Many endangered species are free to roam and live there.