Matthew 1 is the first chapter of the Gospel of Matthew in the New Testament. It contains two distinct sections. The first lists the genealogy of Jesus's legal father Joseph from Abraham. The second part, beginning at 1:18, establishes the doctrine of the virgin birth of Jesus. 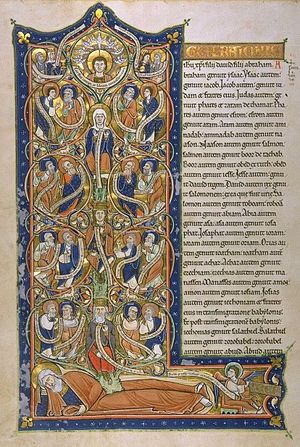 The genealogy in Matthew was traditionally illustrated by a Jesse Tree showing the descent of Jesus from Jesse, father of King David
Main article: Genealogy of Jesus

Matthew opens with the genealogy of Jesus's legal father Joseph, evincing the author considers it important. The genealogy demonstrates that Jesus belongs to the House of David, and thus is his heir. The Gospel also asserts Jesus is, in fact, the Son of God, and Joseph is, thus, not actually Jesus's father. Legally, however, Joseph is Jesus's father and some scholars contend legal parentage is of the most importance. Ra McLaughlin argues that the central event in this passage is actually the adoption of Jesus by Joseph (signified by his naming of the child), which alone makes Jesus eligible to be the messiah from the line of David.

The section begins with Abraham who is traditionally regarded as the ancestor of all the families of the Earth. It then runs through the prominent Old Testament figures of Isaac, Jacob, and Judah. The passage also references Judah's brothers who have no actual place in the genealogy. Gundry contends they are included because the author of Matthew is trying to portray the people of God as a brotherhood.[1]

There are several problems with the genealogies. The list here is significantly different from that found in Luke 3, where the list from the Babylonian captivity to Jesus's grandfather is wholly different. Matthew skips several names in portions where the genealogy is well-known from other sources, Jehoiakim is left out in 1:11 and four names are dropped from 1:8. Unlike most Biblical genealogies, Matthew's genealogy mentions several figures not in the direct line of descent, including four women, Tamar, Ruth, Bathsheba, and Rahab.

Several theories address these questions. One popular theory is that, while Matthew provides the genealogy of Joseph and his father Jacob, Luke details the genealogy of Joseph's father-in-law Heli. McLaughlin argues that because Jeconiah must be counted in two different groups in order to make the "fourteen generations" of 1:17, the genealogy here must be seen, not as a historically complete list, but as a literary device intended to highlight four significant events in Israelite history: the covenant with Abraham, the covenant with David, the Babylonian exile, and especially the reign of the messiah, which is the subject of the rest of the Gospel.

Other scholars doubt these theories, and most who do not believe in the inerrancy of the Bible believe one or both of the pair are historically inaccurate. Luke's genealogy contains a more realistic number of names, given the time period, and Matthew's list also lacks the papponymic naming used in the period. Gundry believes the latter part of Matthew's list is "a large figure of speech". He argues that at the time it was perfectly acceptable to fill gaps in a historical narrative with plausible fiction.[2]

The second part of Matthew 1 relates some of the events from the birth of Jesus. While Luke and Matthew disagree on some details, the most important ideas, such as the Virgin Birth and the divine nature of Jesus, are shared. Unlike Luke's account, Matthew focuses on the character of Joseph and Joseph's discovery and concern over his betrothed's pregnancy and the message from an angel telling Joseph to stand by Mary, quoting Isaiah 7:14 presaging the birth of the Messiah.

This section's focus on Joseph is unusual. Schweizer feels Matthew is far more concerned with proving Jesus' legal status as the stepson of Joseph, and thus a legal heir of David, than proving the Virgin Birth. Schweizer feels this evinces Matthew's intended audience was of predominantly Jewish background, a pattern continuing throughout the Gospel, and the importance Old Testament references provides further evidence.[3] Hill feels the quote from Isaiah was, in fact, the central element and believes the entire last part of the chapter was written to prove Jesus' story matches the prophecy.[4]

Stendhal, by contrast, sees the second section of this chapter as a large footnote to the last line of the genealogy, a lengthy explanation of why Joseph is merely the husband of Jesus' mother but also why Jesus is an heir to David. McLaughlin argues that Matthew recognizes that the prophecy Isaiah gave to King Ahaz in the referenced Old Testament passage concerned a virgin living at that time (namely, Isaiah's wife) and a child (namely, Maher-Shalal-Hash-Baz), who was born as a sign to Ahaz (Isaiah 8:1), and he argues that Matthew saw the act of salvation of which Maher-Shalal-Hash-Baz's birth was a sign as a "type" (or pre-figuring) of the salvation that would come through the virgin and child he was describing (namely, Mary and Jesus).[5]

Other commentators feel this section should be attached to the second chapter, which is divided into four sections, each focusing on an Old Testament passage, and this portion is often seen as the first of those sections.[6]

In the King James Version this chapter reads:

1 The book of the generation of Jesus Christ, the son of David, the son of Abraham.
2Abraham begat Isaac; and Isaac begat Jacob; and Jacob begat Judas and his brethren;
3And Judas begat Phares and Zara of Thamar; and Phares begat Esrom; and Esrom begat Aram;
4And Aram begat Aminadab; and Aminadab begat Naasson; and Naasson begat Salmon;
5And Salmon begat Booz of Rachab; and Booz begat Obed of Ruth; and Obed begat Jesse;
6And Jesse begat David the king; and David the king begat Solomon of her that had been the wife of Urias;
7And Solomon begat Roboam; and Roboam begat Abia; and Abia begat Asa;
8And Asa begat Josaphat; and Josaphat begat Joram; and Joram begat Ozias;
9And Ozias begat Joatham; and Joatham begat Achaz; and Achaz begat Ezekias;
10And Ezekias begat Manasses; and Manasses begat Amon; and Amon begat Josias;
11And Josias begat Jechonias and his brethren, about the time they were carried away to Babylon:
12And after they were brought to Babylon, Jechonias begat Salathiel; and Salathiel begat Zorobabel;
13And Zorobabel begat Abiud; and Abiud begat Eliakim; and Eliakim begat Azor;
14And Azor begat Sadoc; and Sadoc begat Achim; and Achim begat Eliud;
15And Eliud begat Eleazar; and Eleazar begat Matthan; and Matthan begat Jacob;
16And Jacob begat Joseph the husband of Mary, of whom was born Jesus, who is called Christ.
17So all the generations from Abraham to David are fourteen generations; and from David until the carrying away into Babylon are fourteen generations; and from the carrying away into Babylon unto Christ are fourteen generations.
18Now the birth of Jesus Christ was on this wise: When as his mother Mary was espoused to Joseph, before they came together, she was found with child of the Holy Ghost.
19Then Joseph her husband, being a just man, and not willing to make her a public example, was minded to put her away privily.
20But while he thought on these things, behold, the angel of the LORD appeared unto him in a dream, saying, Joseph, thou son of David, fear not to take unto thee Mary thy wife: for that which is conceived in her is of the Holy Ghost.
21And she shall bring forth a son, and thou shalt call his name JESUS: for he shall save his people from their sins.
22Now all this was done, that it might be fulfilled which was spoken of the Lord by the prophet, saying,
23Behold, a virgin shall be with child, and shall bring forth a son, and they shall call his name Emmanuel, which being interpreted is, God with us.
24Then Joseph being raised from sleep did as the angel of the Lord had bidden him, and took unto him his wife:
25And knew her not till she had brought forth her firstborn son: and he called his name JESUS.