Law & Order: UK
This article is about the 2009 adaptation of the US television series. For the 1978 BBC2 teleplays, see Law & Order (UK TV series).

"In the criminal justice system, the people are represented by two separate yet equally important groups: The police who investigate crime, and the Crown Prosecutors who prosecute the offenders. These are their stories."

Law & Order: UK is a foreign adaptation of the Law & Order franchise, one of the most successful brands in American primetime television.[1] Law & Order: UK is based in London and duplicates the episode format of the original series. The first half focuses on the perpetration of a crime and the related police investigation typically culminating in an arrest, while the second half follows the legal and court proceedings in an effort to convict the suspect.[3] The show dwells little on the characters' back-stories or social lives, focusing mainly on their lives at work.[4]

One of the distinguishing features of Law & Order is a black-and-white intertitle card, which gives the description of the time, date and setting of each scene. This intertitle is the first title from "Care".

Law & Order: UK was first imagined by franchise creator Dick Wolf in 2000, however, at the time, no network was willing to pick up a pilot for the series.[5] However, Wolf managed to attract scriptwriter Chris Chibnall, who had previously worked on Torchwood, Life on Mars and Born and Bred, to write a series of thirteen adaptions from the original Law & Order series. Wolf then asked Chibnall to look through the Law & Order Bible, a book released in the United States containing a collection of synopses for every episode. As such, he picked 13 episodes which could adapted for British television, watched the originals on DVD, and then wrote the adaptations to accommodate contractual requirements with production company Kudos, and to build on the show's reputation of successful storytelling. Subsequently, the series was picked up by ITV. One of the episodes Chibnall adapted, however, had to be scrapped due to incompatability with English Law, resulting in a a different episode being adapted.[6] Wolf then attracted producer Richard Stokes to the series, however, he stated that a thirteen-episode series would be too long for broadcast on British television, and thus, he separated the thirteen scripts into two separate series. Dick Wolf, however, objected to this, claiming that it wouldn't be an issue, as each season in the United States contains 22 episodes per season. Wolf pushed ITV for more episodes per series, however, his attempt was unsuccessful. Each of the thirteen scripts were updated for contemporariness, and while the difficulties of adapting the scripts for the English legal system exceeded the expectations of the production team, Stokes opined that audiences familiar with both shows would enjoy them for their distinctions. Further series have continued to adapt scripts from the original Law & Order series. Many of the familiar hallmarks of the original Law & Order series were carried through into the adaptation, including the styling of the opening music, black-and-white intertitles, using Wolf's signature cash register sound, and hand-held camera work. Stokes later expressed his praise for the Kudos' method of "guerrilla filming" on the streets of London.[7] Wolf later described the biggest difference between the two series as the wigs, claiming, "The law is not really that dissimilar and, you know, murder is murder."[8]

Filming on the first series of Law & Order: UK began in January 2008, [10] and at the time, discrepencies were identified by cast member Jamie Bamber, who in an interview with Variety magazine, claimed "if things are to continue the way they do, it's likely we won't get a second series.zine as to the possibility of a second series.[11] However, ITV comissioned a further thirteen episodes, and filming began in the third quarter of 2009.[12] These episodes were subsequently broadcast from 9 September 2010.[13] For the Law part of the series, frequent filming on-location around London takes place, while for the Order part, filming around the exterior of the Old Bailey takes place concurrently on Sundays. Filming of the courtroom interior, police station office and the Crown Prosecution Service office takes place on a specially built set on disused Ministry of Defence base in Qinetiq,[14] based near the M25 motorway in Surrey.[15] The police station set was specifically designed with an eye for realism; with personal items on each of the desks, and an ironing board and clean shirts being placed around for the eventuality of police officers heading to court. The campus of University College London, including the main quadrant and the cloisters, was used for the basis of filming for scenes due to be aired in series six.[16] 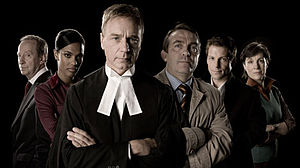 Independent writer Robin Jarossi attended a special preview of the premiere episode at the British Film Institute in London on 5 February 2009. Jarossi praised the uniquely British take on the franchise for balancing the new vision while maintaining the proven Law & Order formula. Jarossi specifically extolled the unexpected casting of Bradley Walsh, the excellent use of their London backdrop, and Chibnall's adaptation of the show.[27] John Boland of the Irish Independent compared Law & Order: UK to the original, ultimately deciding that the former is just as engrossing as the latter, if its tone is slightly more jocular. Boland expects ITV "has a winner on it's hands."[28] Andrew Billen from The Times expects the series to be successful based on the premiere episode,[29] and TV Times said that "those concerned can give themselves a pat on the back because this really, really works."[30] The Daily Express' Matt Baylis described the new series as "a breath of fresh air", and the Daily Mirror said "It’s all highly professional and heroic."[2] Variety magazine called the series a hit, quoting NBC Universal as saying, "'Law and Order' has won it's slot every week and is actually increasing it's ratings." While Radio Times reviewer Alison Graham felt the series' execution was adequate, she criticised its pacing and writing; the former for not matching that of the original Law & Order programmes, and the latter for "falling headfirst into a typically British legal-drama trap of the noble prosecutor, crusading to bring the guilty to justice while pitted against the louche, self-serving defence barrister."[31] Whereas, on the other hand, The Guardian's Sarah Dempster didn't feel that using the original series' camera work and stylings was appropriate for British crime drama: "Fiddly. And wrong.".[2] However, later on in the series' run The Observer's Kathryn Flytt writes that despite her initial prejudices, the series "seems to have absorbed the pace and energy of the original without looking too tricksily derivative".[32] In Australia, Melinda Houston commented favourably in The Age on the show's opening series, opining that the fusion between British crime drama and the US Law & Order franchise is like "a match made in heaven."[33] The premiere episode which aired on 12 August 2009, only rated 775,000 viewers, and was outside the top 15 rated shows for that period.[34]