Math Blaster Episode I: In Search of Spot

Math Blaster Episode I: In Search of Spot

The game's story is a simple rescue mission, centering on the efforts of Blasternaut to retrieve Spot from the clutches of the malicious "Trash Alien," who, apparently, litters out of sheer spite. The garbage he leaves behind consists primarily of empty containers and bad food, though coil-springs, boots and fish skeletons are also present.

In the opening scenes, Spot and Blasternaut are preparing for a journey aboard their rocket-like spaceship, only to find that the ship is not functional. Blasternaut, jumping to conclusions, sends Spot to repair a mechanism known as the "polytronic combustion regulator" and Spot reluctantly begins repairs, while Blasternaut goes below deck.

As Spot works, the Trash Alien flies by, captures Spot and departs, leaving garbage everywhere. Blasternaut, upon discovering this, contacts his superior officer, Galactic Commander, and notifies her of the situation. Galactic Commander immediately identifies the criminal and sends Blasternaut to collect the trash, use it to fuel his ship, track down the Trash Alien and destroy his spacecraft.

This leads to the game of "Trash Zapper," wherein the user, as Blasternaut, uses math to generate the "tractor beams" needed to collect the trash. For every problem answered, a tractor beam is added and, after five problems, a noneducational firing session begins, in which the user tries to collect as much of the trash as possible. Once the firing session ends, the user is presented with more math problems and the process repeats until all the garbage has been collected. 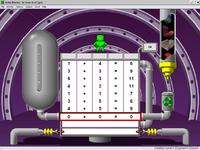 The fuel tank is on the left, and on easier levels has 15 sections instead of 25. By clicking or double-clicking on the rectangles beneath Blasternaut, players instruct him where to go and press numbers and operators down.

Blasternaut then goes down to the fuel chamber to recycle the trash. Here, the player completes equations, at which the machinery of the Number Recycler (a large structure used to create fuel) melts the garbage, freshens it to maximize energy and loads it into the fuel tanks. The player can adjust the numbers and symbols as needed.

Having fueled the tanks, Blasternaut tracks the Trash Alien to a series of caves. By means of a jetpack, he must fly to the surface of the planet in order to reach the villain. Every level of the cave contains a gap with a number or a mathematical expression on both sides, which form a barrier that Blasternaut can only pass through if he bears a number that comes between the two numbers or the numbers that would be formed by solving the expressions (example: if the gap has "3" on one side and "6 + 3" on the other, Blasternaut's number would have to be between three and nine for him to pass through.)

Large drops of water, which contain an operation followed by a number, form on stalactites that will allow Blasternaut to change his number by implementing the drop's number, through the drop's operation, on his number (example: if the drop reads "+2" than his number will be increased by two.) Unless the user is on level one, the caves also contain additional obstacle in the form of bats, spider webs, boulders and a large cave-dwelling aliens. In the corners of each such cave is a treasure chest. The user must answer a problem to open the chest and acquire a weapon to drive off the obstacle (example: a flashlight drives off the bat, scissors cut the spider-web, etc.)

Finally, it is Blasternaut's task to enter the Trash Alien's flying saucer and rescue Spot. In order to do this, he must fly through one of four openings in the flying saucer, which contain the answer to a particular problem. He must choose the right answer and reach it before being shot by the Trash Alien's weapons or being struck by flying garbage. In addition, he has only a limited time before the problem changes. If he is successful, Spot is freed and the Trash Alien's craft is destroyed, though the Trash Alien escapes.

The game features eight different subjects, which are chosen at the start the game. All the problems encountered in the game, except in the "Cave Runner" exercise, will fall into the chosen subject. The subjects are as follows:

There are also six levels of difficulty, which adjust how hard the problems of the chosen subject are. If the user attempts to change subjects or leveling during the course of a mission, then the game will warn them that, if they do so, the mission will begin anew, which it will.

Notably, this game introduced the character of Galactic Commander (later called "G.C.") to the series. Spot had already been introduced in the previous game, New Math Blaster Plus!, while Blasternaut had been in the series from the beginning.

Also, the previous games in the series merely provided math problems in an outer space setting without any kind of plot. This game introduced the premise of fighting intergalactic criminals, which would permeate the rest of the series.

The program was translated to Spanish and was published as Mates Blaster: En Busca de Positrón.