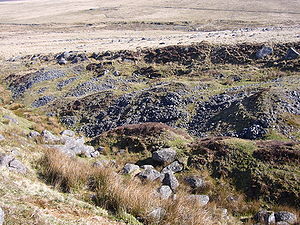 An example of the characteristic pattern of parallel ridges and scarp left by tin-streaming, east of Fox Tor, Dartmoor

This is a list of charters promulgated by kings of England that specifically relate to Cornwall. Various such charters were issued from 1201 to 1508. Having been incorporated into the Kingdom of England late in the Anglo-Saxon period, the constitutional status was unlike that of the rest of England in the Middle Ages, rather like a County Palatine but not designated as such. The charters below relate either to the tin mines of Cornwall and Devon or to the Earldom or Duchy of Cornwall. The stannary charters are dated between 1201 and 1508, the others between 1231 and 1338.

Until the early Tudor period Cornwall existed on maps of Great Britain as a separate and distinct country from England. Royalty referred to themselves as being 'rulers of England and Cornwall' (in Latin "Anglia et Cornubia"). A Greek traveller in 300 BC recorded that the people of Cornwall were an evolved and civilized tin mining community trading tin with other countries, 800 years before the Anglo-Saxons first set foot in Britain. In the 9th and 10th centuries, the kings of Wessex became the rulers of Cornwall, and after a period of independence during the wars with the Danes this rule by the kings of England became permanent (see History of Cornwall).

In 1337, the earldom of Cornwall was made into a royal Duchy to support the heir to the throne, Cornwall became an extraterritorial region of England ruled by the Dukes of Cornwall. Centralisation in the reign of Henry VIII meant that Cornwall's distinct status was no longer recognised in royal documents; though unlike the situation for Wales, no legislation was enacted to formalise this. The rights of the Duke of Cornwall still rely on medieval legislation. When no one is duke of Cornwall, the lands and rights of the Duchy are exercised by the Crown since the heir apparent may not always inherit the Duchy.

The legal materials are as follows: