Paired-end tags, also known as PET, refer to the short sequences at the 5’ and 3’ ends of the DNA fragment of interest, which can be a piece of genomic DNA or cDNA. These short sequences are called tags or signatures because, in theory, they should contain enough sequence information to be uniquely mapped to the genome and thus represent the whole DNA fragment of interest. It was shown conceptually that 13 bp is sufficient to map tags uniquely.[1] However, longer sequences are more practical for mapping reads uniquely. The endonucleases (discussed below) used in PET produce longer tags (18/20 bp and 25/27 bp) but sequences of 50-100 base pairs would be optimal for both mapping and cost efficiency.[1] After extracting the PETs from many DNA fragments, they are linked (concatenated) together for efficient sequencing. On average, 20-30 tags could be sequenced with the Sanger method, which has a longer read length.[1] Since the tag sequences are short, individual PETs are well suited for next-generation sequencing that has short read lengths and higher throughput. The main advantages of PET sequencing are its reduced cost by sequencing only short fragments, detection of structural variants in the genome, and increased specificity when aligning back to the genome compared to single tags, which involves only one end of the DNA fragment. 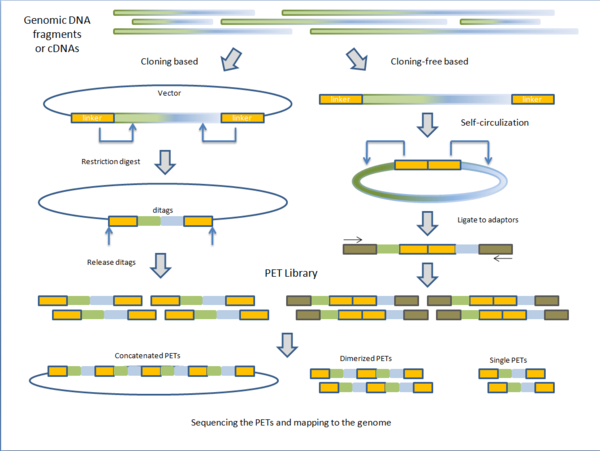 Workflow of Cloning and Cloning-free based PET library construction.

PET libraries are typically prepared in two general methods: cloning based and cloning-free based.

Fragmented genomic DNA or complementary DNA (cDNA) of interest is cloned into plasmid vectors. The cloning sites are flanked with adaptor sequences that contain restriction sites for endonucleases (discussed below). Inserts are ligated to the plasmid vectors and individual vectors are then transformed into E. coli making the PET library. PET sequences are obtained by purifying plasmid and digesting with specific endonuclease leaving two short sequences on the ends of the vectors. Under intramolecular (dilute) conditions, vectors are re-circularized and ligated, leaving only the ditags in the vector. The sequences unique to the clone are now paired together. Depending on the next-generation sequencing technique, PET sequences can be left singular, dimerized, or concatenated into long chains.[1]

Instead of cloning, adaptors containing the endonuclease sequence are ligated to the ends of fragmented genomic DNA or cDNA. The molecules are then self-circularized and digested with endonuclease, releasing the PET.[1] Before sequencing, these PETs are ligated to adaptors to which PCR primers anneal for amplification. The advantage of cloning based construction of the library is that it maintains the fragments or cDNA intact for future use. However, the construction process is much longer than the cloning-free method. Variations on library construction have been produced by next-generation sequencing companies to suit their respective technologies.[1]

Unlike other endonucleases, the MmeI (type IIS) and EcoP15I (type III) restriction endonucleases cut downstream of their target binding sites. MmeI cuts 18/20 base pairs downstream [2] and EcoP15I cuts 25/27 base pairs downstream.[3] As these restriction enzymes bind at their target sequences located in the adaptors, they cut and release vectors that contain short sequences of the fragment or cDNA ligated to them, producing PETs. 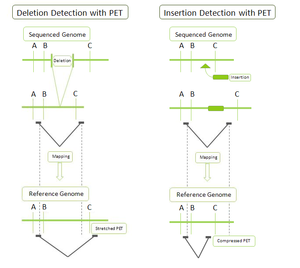 Example of PET detection of deletions and insertions. 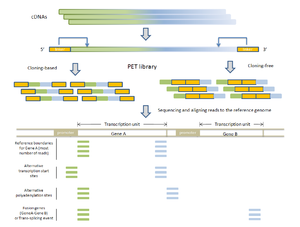