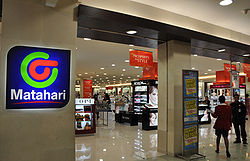 In Indonesian, matahari means "sun". The Matahari logo resembles the shape of the sun.

Both Hypermart and Carrefour compete to be the biggest retailer in Indonesia. Giant Hypermarket, a Malaysian retailer, has a smaller market presence.