Megamind is a 2010 3D computer-animated superhero action comedy film directed by Tom McGrath. It was produced by DreamWorks Animation and Red Hour Productions, and distributed by Paramount Pictures. The film was released in the United States in Digital 3D, IMAX 3D and 2D on November 5, 2010. It features the voices of Will Ferrell, Brad Pitt, Tina Fey, David Cross, and Jonah Hill.[2]

Megamind (Will Ferrell) is a super-intelligent alien, a (self-proclaimed) incredibly handsome genius and master of all villainry, and (also self-proclaimed but with more to back it up) villain of the fictional Metro City. Megamind has constantly battled and lost to his nemesis Metro Man (Brad Pitt) ever since they both arrived on Earth as infants. On the day that Metro City dedicates a museum to their protector, Megamind and his only friend and sidekick Minion (David Cross) kidnap reporter Roxanne Ritchi (Tina Fey) and lure Metro Man into a copper-lined room. To everyone's surprise, Metro Man is unable to escape and appears to be killed when Megamind's death ray strikes him. Megamind revels in his victory against Metro Man, but shortly after becomes depressed, his villainy having no meaning without anyone to stop him.

While attempting to destroy the museum (which he successfully does), Megamind disguises himself as its curator Bernard (Ben Stiller) (after he dehydrates Bernard into a small cube) to avoid being found by Roxanne and ends up talking with her. Megamind is inspired by a comment from Roxanne to create a superhero by injecting a worthy target with a serum fashioned from Metro Man's DNA, granting them Metro Man's super-abilities. As Megamind is selecting his target, Roxanne sneaks into his lair; in the resulting chaos, Megamind accidentally fires the serum into Hal, Roxanne's cameraman (Jonah Hill). Taking advantage of the gullible Hal, Megamind appears to the transformed human as his "space dad", grooming Hal into a new superhero named Tighten and preparing him to fight Megamind. Meanwhile, Megamind has become attracted to Roxanne, and continues to date her using his Bernard disguise. Tighten, also infatuated with Roxanne, becomes jealous of Bernard, while Minion, seeing Megamind losing interest in villainy, angrily leaves him. On a dinner date, Megamind's disguise falters, leading Roxanne to dump him. Megamind, heartbroken, returns to his lair and vows to fight Tighten the next day as planned.

Megamind becomes impatient waiting for Tighten and seeks him out, only to find that Tighten is intending to use his powers for nefarious purposes. Outraged, Megamind taunts Tighten into fighting him by revealing his "space dad" and "Bernard" disguises. In the midst of the fight, Megamind realizes that Tighten will not be satisfied with simply imprisoning Megamind, but intends to kill him. Megamind tries to activate his safeguard scheme by capturing Tighten in a copper-lined trap but is shocked to find it fails to work. Megamind flees, leaving the city to celebrate Tighten's victory, until Tighten reveals that he is taking over the city and goes on a destructive rampage as the new villain. Megamind returns to Roxanne, apologizing and convincing her to lead him to Metro Man's secret headquarters where they might find another way to stop Tighten. They are surprised to find Metro Man alive, secluded in his headquarters. Metro Man reveals he had become tired of being a superhero, feeling he was forced into the role. He reveals that on the day when Megamind trapped him in the observatory, Metro Man faked his own death (using a fake skeleton) and went into hiding to pursue his real dream--being a musician. Without any new leads, Roxanne tries to convince Megamind to fight Tighten as the city's hero, but Megamind feels he is destined to always be the failing villain, and turns himself back in to prison.

Later, Tighten captures Roxanne and secures her to the top of Metro Tower, threatening to kill her if Megamind does not fight him. Seeing Roxanne in danger, Megamind pleads to the Warden for his release, apologizing for all the wrongs he committed before. To the villain's surprise, Minion has disguised himself as the Warden, accepts Megamind's apology, and the two take off to save the city. Minion disguises himself as Megamind to lure Tighten from the tower and save Roxanne, while Megamind disguises himself as Metro Man to verbally berate Tighten for his actions. Tighten is temporarily bested, and told by "Metro Man" to leave "Metrocity" (Megamind's distinctive mispronunciation of "Metro City"), but the deranged villain returns, seeing through Megamind's disguise. Again, Megamind is forced to run from Tighten's wrath, until Roxanne discovers where Megamind left his invisible car and the tool to extract the superhero serum from Tighten. Megamind successfully retrieves the device and uses it on Tighten, reverting him back to Hal. As Hal is taken away to jail, the city cheers for its new hero, a role that Megamind realizes he is capable of choosing himself.

In the aftermath, the former Metro Man museum is rededicated to Megamind, who is slowly coming around to being the hero. He and Roxanne have developed a relationship, and hidden in the crowds, a disguised Metro Man gives Megamind his congratulations. A scene in the middle of the credits shows Minion putting Megamind's clothes in a washing machine, causing Bernard to rehydrate back to normal, as Megamind left him in his pants.

The film was first titled Master Mind and then Oobermind.[6] Lara Breay and Denise Nolan Cascino were the film's producers, and Ben Stiller and Stuart Cornfeld were the executive producers.[6] Ben Stiller was originally cast as Megamind, and later Robert Downey, Jr.,[7] but Will Ferrell was given the role, due to "scheduling conflicts" for Downey.[2] The film is written by Alan J. Schoolcraft and Brent Simons.[8]

Megamind: Music from the Motion Picture was released on November 2, 2010 by Lakeshore Records.

All songs written and composed by Hans Zimmer and Lorne Balfe, except as noted.

Other songs used in the film include:

Megamind received positive reviews from most critics, with the film garnering a 72% "fresh" rating on review aggregate Rotten Tomatoes based on 166 reviews with an average rating of 6.6/10.[9] Its consensus states the film "regurgitates plot points from earlier animated efforts, and isn't quite as funny as it should be, but a top-shelf voice cast and strong visuals help make Megamind a pleasant, if unspectacular, diversion."[9] Another review aggregate, Metacritic, which assigns a normalized rating out of 100 top reviews from mainstream critics, calculated an average score of 64 based on 32 reviews.[10]

Roger Ebert of the Chicago Sun-Times awarded the film three out of four stars, stating "This set-up is bright and amusing, even if it does feel recycled from bits and pieces of such recent animated landmarks."[11] Stephen Holden, film critic for The New York Times, positively wrote in his review that "Visually Megamind is immaculately sleek and gracefully enhanced by 3-D."[12] Entertainment Weekly film reviewer Owen Gleiberman graded the film a B+ described the film as "too goofy-surreal to pack a lot of emotional punch, but it's antically light on its feet, with 3-D images that have a lustrous, gizmo-mad sci-fi clarity."[13] Peter Travers of Rolling Stone wrote that "What this raucous 3D animated fun house lacks in originality (think bastard child of The Incredibles and Despicable Me) it makes up for in visual and vocal wit."[14] Betsy Sharkey of The Los Angeles Times gave the film mixed review as well writing "Just as Megamind struggles to find his center, at times, so does the film."[15]

The film closed in theaters on February 24, 2011 after grossing $148,415,853 in the U.S. and Canada as well as $321,494,448 worldwide.[1] The final gross was on the low end for a DreamWorks Animation film, but was still a box office success since it beat its $130 million budget. It was the sixth highest-grossing animated film from 2010 worldwide, behind Toy Story 3 ($1.063 billion), Shrek Forever After ($753 million), Tangled ($591 million), Despicable Me ($549 million), and How to Train Your Dragon ($493 million). The film also became the highest-grossing film worldwide in both Ferrell and Fey's careers.[16][17] It was also the second highest-grossing superhero comedy film, behind The Incredibles. 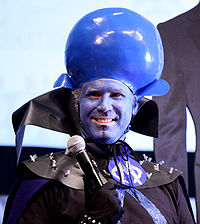 Will Ferrell dressed as his character, Megamind, at the 2010 San Diego Comic-Con International.

A 47-second teaser trailer of the film was released online on March 18, 2010 and then premiered in How to Train Your Dragon. A second trailer premiered in Shrek Forever After and then in select screenings of Toy Story 3, The Last Airbender, Despicable Me, and The Sorcerer's Apprentice and also appeared on PBS Kids DVDs, Super Why: Attack of the Eraser and Dinosaur Train: Dinosuars Under the Sea. A third 4-minute trailer of the film premiered at the 2010 San Diego Comic-Con International, which later aired during a commercial break of Futurama's 100th episode, "The Mutants Are Revolting".[21] The final trailer was shown online on September 10, 2010 which showed more plot detail of the film that reveals Metro Man is still alive.

The first five minutes of Megamind were shown during an episode of iCarly on Nickelodeon on October 2, 2010.