According to the Queen's Regulations and Orders:

Master Corporal, while formally an appointment, is treated as a de facto non-commissioned member rank, and is often described as such, even in official documents. 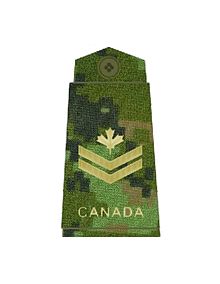 The rank insignia of a Master Corporal is a 2-bar chevron, worn point down, surmounted by a maple leaf. Embroidered rank badgers are worn in "CF gold" thread on rifle green (Army) or Air Force blue (Air Force) melton, stitched to the upper sleeves of the Service Dress jacket; as miniature gold metal and rifle-green enamel badges on the collars of the Army dress shirt and Army outerwear jackets; in "old-gold" thread on Air Force blue slip-ons on Air Force shirts, sweaters, and coats; and in tan (Army) or dark blue (Air Force) thread on CADPAT slip-ons on the Operational Dress uniform. Insignia for mess kit is determined by branch or regimental tradition.

Master Corporals normally mess and billet with the Junior Ranks.

The Master Corporal appointment came into existence after the Unification of the armed forces of Canada in the late 1960s. A power vacuum was inadvertently created when private soldiers were promoted to the rank of corporal as an incentive for continuing in the Forces at a time when Unification (and the role of the United States in the Vietnam War) made the military an unpopular option for employment. Eventually, corporals who had passed the "B" phase of their leadership training took to wearing a crown over their chevrons, and this arrangement was eventually formalized by having a maple leaf replace the crown, and the new "'B' Corporals", as they were known, became Master Corporals.

The rank, formally an appointment as a senior corporal, gives the MCpl authority over all privates and corporals. As such, a MCpl is a first level supervisor who will be assessed on his/her ability to manage and develop subordinates. Given the structure of the Canadian infantry platoon, the MCpl is roughly equivalent to the British rank of corporal, second in command of an infantry section.

The general requirements for promotion to Master Corporal include a Qualification Level 5 course (known as a Journeyman course in some trades), a primary leadership qualification course (PLQ), and a time in the rank of Corporal for a minimum of two years.

Master Corporals often serve as Training Non-Commissioned Officers for the purposes of training new soldiers. They are often a new recruit's first taste of military life.