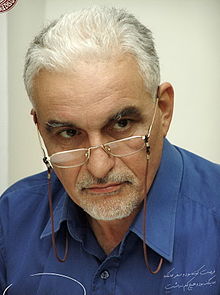 He was born in Kermanshah. He received his MA from the department of archaeology at University of Tehran in 1972 and his PhD from the University of California, Los Angeles in 1985. After returning to Iran, he taught at the University of Tehran before taking up the direction of the Iranian Center for Archaeological Research. He had a fundamental role in reorganizing the ICAR in its new building in the Mas'udieh Palace. Azarnoush helped young archaeologists and students to join to the ICAR and participate in various archaeological research and activities. Although his career was historical archaeology, but he had a keen interest in developing research on the pre- and proto-history of Iran, especially Paleolithic studies. He emphasized the importance of interdisciplinary studies such as archaeobotany and zooarchaeology. Azarnoush welcomed international cooperation, and the series of rescue excavations in the Bulaghi gorge near Pasargadae in cooperation with teams from Germany, France, Poland has been one of the rare successes of archaeological fieldwork in Iran during the past 20 years. He excavated at important sites such as Kangavar, Hamadan, Susa, and Hajiabad where he found a Sassanian manor house at with stucco decorations, which served the basis for his doctoral dissertation and book. He was preparing a field project at the Parthian remains at Qaleh Yazdgird near Kermanshah. He re-investigated Tepe Hegmataneh in Hamadan. His excavations demonstrated that the actual remains date to the Parthian period at the earliest. Median Ecbatana should be sought elsewhere. He prematurely died of a heart attack on his return from the excavations at Hamadan at the age of 63.[1]