Anti-communist mass killings refer to the political mass murder of communists, alleged communists, other leftists, or their supporters by right-wing, reactionary regimes.[citation needed]

The Dirty War refers to the state-sponsored violence against Argentine citizenry from roughly 1976 to 1983 carried out primarily by Jorge Rafael Videla's military government.

Starting in 1976, the juntas led by Videla until 1981, and then by Roberto Viola and Leopoldo Galtieri, were responsible for the illegal arrest, torture, killing or forced disappearance of thousands of people, primarily trade unionists, students and activists. Videla's dictatorship referred to its systematized persecution of the Argentine citizenry as the "National Reorganization Process".

Up to 30,000 people "disappeared" during this time.[1] Argentine security forces and death squads worked hand in hand with other South American dictatorships in Operation Condor. An Argentine court would later condemn the government's crimes as crimes against humanity and genocide.[2] 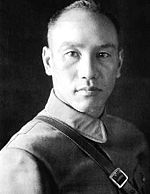 The Shanghai massacre of 1927, also known as the April 12 Incident, was a large-scale purge of Communists from the Kuomintang (KMT) in Shanghai, ordered by Generalissimo Chiang Kai-shek on 12 April 1927, during the Northern Expedition against the warlords.

On April 12, 1927, Chiang carried out purge of Communists from the Kuomintang in Shanghai and began large-scale massacres. Chiang's forces turned machine guns on 100,000 workers taking to streets, massacring more than 5000 people. Throughout April 1927 in Shanghai, more than 12,000 people were killed. The killing in Shanghai drove most of the Communists out of the urban cities and into the rural countryside.[3]

The 228 Incident, also known as the 228 Massacre, was an anti-government uprising in Taiwan that began on February 27, 1947 and was violently suppressed by the Kuomintang (KMT) government. Estimates of the number of deaths vary from ten thousand to thirty thousand or more.[5][6] The Incident marked the beginning of the Kuomintang's White Terror period in Taiwan, in which thousands more Taiwanese vanished, were killed, or imprisoned. The number "228" refers to the day the massacre began: February 28, or 02-28.

Some of the killings were random, while others were systematic. Taiwanese elites were among those targeted, and many of the Taiwanese who had formed home rule groups during the reign of the Japanese were also victims of the 228 Incident. A disproportionate number of the victims were also Taiwanese middle and high school age youths, as many of them had volunteered to serve in the temporary police forces that were organized by the Committee and the local town councils to maintain public order following the initial rebellion. Several sources have claimed that ROC troops were arresting and executing anyone wearing a student uniform.

The Caravan of Death was a Chilean Army death squad that, following the Chilean coup of 1973, ordered or personally carried out the execution of at least 75 individuals held in Army custody in these garrisons.[7] According to the NGO Memoria y Justicia, the squad killed 26 in the South and 71 in the North, making a total of 97 victims.[8] Augusto Pinochet was indicted in December 2002 in this case, but he died four years later without having being judged. The trial, however, is on-going as of September 2007, other militaries and a former military chaplain having been indicted in this case.

In the days immediately following the 1973 Chilean coup d'état, the National Stadium was used as a concentration camp holding 40,000 prisoners.[9] Some of the most famous cases of "desaparecidos" are Charles Horman, a U.S. citizen who was killed during the coup itself,[10] Chilean songwriter Víctor Jara, and the October 1973 Caravan of Death (Caravana de la Muerte) where at least 70 persons were killed.[11] In the first three months following the coup, the number of suspected leftists killed or "disappeared" (desaparecidos) soon reached into the thousands.[12] Others operations included Operation Colombo, during which hundreds of left-wing activists were murdered, and Operation Condor, carried out with the security services of other Latin American dictatorships.

Following Pinochet's defeat in the 1988 plebiscite, the 1991 Rettig Commission, a multipartisan effort from the Patricio Aylwin administration to discover the truth about the human-rights violations, listed a number of torture and detention centers (such as Colonia Dignidad, the ship Esmeralda or Víctor Jara Stadium), and found that at least 3,000 people were killed or disappeared by the regime. 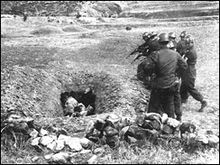 The Bodo League Massacre was a massacre that occurred in the summer of 1950 during the Korean War. Estimates of the death toll vary; while police records estimate around 10,000 deaths, the truth commission has said there may be more and according to Prof. Kim Dong-Choon, Commissioner of the Truth and Reconciliation Commission, at least 100,000 people were executed for the suspicion of supporting communism.[13]

In the southeastern city of Ulsan, hundreds of people were massacred by the South Korean police during the early months of the Korean War between 1950 and 1953. 407 civilians were summarily executed without trial in July and August 1950 alone. On January 24, 2008, the former President of Korea Roh Moo-hyun apologized for the mass killings. (See also the mass killings conducted against prison inmates who were suspected leftists at prisons in other cities such as[14] Busan, Masan, and Jinju.)

The Jeju Uprising refers to the rebellion on Jeju island, South Korea, beginning on April 3, 1948. Between 14,000 and 30,000 individuals were killed in fighting between various factions on the island. The suppression of rebellion by the South Korean army has been called “brutal”, resulting in tens of thousands of deaths, the destruction of many villages on the island, and sparking rebellions on the Korean mainland. The rebellion, which included the mutiny of several hundred members of the South Korean 11th Constabulary Regiment, lasted until May 1949, although small isolated pockets of fighting continued into 1953.[15][16]

In an attempt to suppress the revolution following the First World War, militias were formed out of demobilized WWI veterans. The Freikorps, as they were called, were meant as a replacement for the Kaiser's Army, which had evaporated overnight owing to desertion. The Freikorps was sent to suppress the revolution on the streets of Berlin and later invaded the Bavarian Soviet Republic.[19] Comintern journalist and Marxist, Victor Serge, estimated the number of workers who died in the repression of revolutionary developments in Germany from 1918 to 1921 at 15,000.[20][unreliable source?][dubious – discuss] Academic sources state that between 1919 and 1923 there were 354 victims directly traceable to Freikorps actions.[21]

On 5 May 1919 twelve workers (most of them members of the Social Democratic Party, SPD) were arrested and killed by members of Freikorps Lützow in Perlach near Munich, based on a tip from a local cleric saying they were communists. A memorial on Pfanzeltplatz in Munich today commemorates this atrocity.[22][23][24]

German communists, socialists and trade unionists were among the earliest domestic opponents of Nazism[25] and were also among the first to be sent to concentration camps. Hitler claimed that communism was a Jewish ideology which the Nazis termed "Judeo-Bolshevism". Fear of communist agitation was used as justification for the Enabling Act of 1933, the law which gave Hitler his original dictatorial powers. Hermann Göring later testified at the Nuremberg Trials that the Nazis' willingness to repress German communists prompted President Paul von Hindenburg and the German elite to cooperate with the Nazis. The first concentration camp was built at Dachau, in March 1933, to imprison German communists, socialists, trade unionists and others opposed to the Nazis.[26] Communists, social democrats and other political prisoners were forced to wear a red triangle.

Whenever the Nazis occupied a new territory, members of communist, socialist, or anarchist groups were normally to be the first persons detained or executed. Evidence of this is found in Hitler's infamous Commissar Order, in which he ordered the summary execution of all political commissars captured among Soviet soldiers, as well as the execution of all Communist Party members in German held territory.[27][28] Einsatzgruppen carried out these executions in the east.[29]

The White Terror in Hungary was a two-year period (1919–1921) of repressive violence by counter-revolutionary soldiers, with the intent of crushing any vestige of Hungary’s brief Communist revolution.

In 1919, an alternative government formed to replace the failed Béla Kun regime. Leading the armed wing of this new government was Admiral Miklós Horthy, one-time Admiral of the Austro-Hungarian Navy.[30]

Horthy named his new force the National Army. Among the officers who answered Horthy’s call were ultra-nationalist soldiers who mounted a campaign of atrocities to avenge the victims of the Red Terror; to suppress any lingering loyalty to Communist principles; and to frighten the population into obedience to the new order.[31]

These units, commonly known as the "White Guard," carried out a campaign of murder, torture and humiliations. Summary executions of people they suspected of Communist allegiance were common; these victims were often hanged in public places to serve as a warning to others. But the White Guard’s definition of who was an enemy of the state was a broad one. They also preyed upon peasants, upon the politically liberal, and very often upon Jews, who were broadly blamed for the Revolution because much of the Communist leadership had been Jewish.[31]

The Indonesian killings of 1965-66 were a violent anti-Communist purge following an abortive coup in the Indonesian capital of Jakarta. Conventional estimates of the number of people killed by the Indonesian security forces over the course of this period run at between 500,000 and 1,000,000. [32]

The killings started in October 1965 in Jakarta, spread to Central and East Java and later to Bali, and smaller outbreaks occurred in parts of other islands,[33] notably Sumatra. As the Sukarno presidency began to unravel and Suharto began to assert control following the coup attempt, the PKI's upper national leadership was hunted and arrested with some summarily executed; the airforce in particular was a target of the purge. PKI chairman, Dipa Nusantara Aidit, had flown to Central Java in early October, and where the coup attempt had been supported by leftist officers in Yogyakarta, Salatiga, and Semarang.[34] Fellow senior PKI leader, Njoto, was shot around 6 November, Aidit on 22 November, and First Deputy PKI Chairman, M.H. Lukman, was killed shortly after.[35]

In 1963, the Kennedy administration backed a coup against the government of Iraq headed by General Abdel Karim Kassem, who five years earlier had deposed the Western-allied Iraqi monarchy. The CIA helped the new Ba'ath Party government led by Abdul Salam Arif in ridding the country of suspected leftists and Communists. In the Ba'athist coup, the government used lists of suspected Communists and other leftists, provided by the CIA, to systematically murder untold numbers of Iraq's educated elite — killings in which Saddam Hussein himself is said to have participated. The victims included hundreds of doctors, teachers, technicians, lawyers, other professionals, military and political figures.[36][37][38] According to an op-ed in The New York Times, the U.S. sent arms to the new regime, weapons later used against the same Kurdish insurgents the U.S. had supported against Kassem and then abandoned. American and UK oil and other interests, including Mobil, Bechtel, and British Petroleum, were conducting business in Iraq.[36]

In Spain, White Terror refers to the atrocities committed by the Nationalist movement during the Spanish Civil War and during Francisco Franco's dictatorship.[39]

Concrete figures do not exist, as many Communists and Socialists fled Spain after losing the Civil War. Furthermore, the Francoist government destroyed thousands of documents relating to the White Terror[44][45][46] and tried to hide the executions of the Republicans.[47][48] Thousands of victims of the "White Terror" are buried in hundreds of unmarked common graves, more than 600 in Andalusia alone.[49] The largest common grave is that at San Rafael cemetery on the outskirts of Malaga (with perhaps more than 4,000 bodies).[50] The Association for the Recovery of Historical Memory (Asociación para la Recuperación de la Memoria Historica or ARMH)[51] says that the number of disappeared is over 35,000.[52]