Massacres of Albanians in the Balkan Wars

Massacres of Albanians in the Balkan Wars 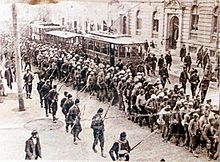 Albanian prisoners are marched through Belgrade 1912.

A series of massacres of Albanians in the Balkan Wars were committed by the Serbian and Montenegrin Army and paramilitaries, according to international reports.[1]

During the First Balkan War of 1912-13, Serbia and Montenegro - after expelling the Ottoman forces in present-day Albania and Kosovo - committed numerous war crimes against the Albanian population, which were reported by the European, American and Serbian opposition press.[2] In order to investigate the crimes, Carnegie Endowment for International Peace formed a special commission, which was sent to the Balkans in 1913. Summing the situation in Albanian areas, Commission concludes:

Houses and whole villages reduced to ashes, unarmed and innocent populations massacred en masse, incredible acts of violence, pillage and brutality of every kind — such were the means which were employed and are still being employed by the Serbo-Montenegrin soldiery, with a view to the entire transformation of the ethnic character of regions inhabited exclusively by Albanians.[1]

— Report of the International Commission on the Balkan Wars

The goal of the forced expulsions and massacres of ethnic Albanians was a statistic manipulation before the London Ambassadors Conference which was to decide on the new Balkan borders.[2][3][4] The number of victims in the Vilayet of Kosovo under Serbian control in the first few months was estimated at about 25,000 people.[2][4][5] Highest estimated number of total casualties during the occupation in all the Albanian areas under Serbian control was about 120,000 Albanians of both sexes and all ages.[6]

Even one Serb Social Democrat who had served in the army previously commented on the disgust he had for the crimes his own people had committed against the Albanians, describing in great detail heaps of dead, headless Albanians in the centers of a string of burnt towns near Kumanovo and Skopje:

...the horrors actually began as soon as we crossed the old frontier. By five p.m. we were approaching Kumanovo. The sun had set, it was starting to get dark. But the darker the sky became, the more brightly the fearful illumination of the fires stood out against it. Burning was going on all around us. Entire Albanian villages had been turned into pillars of fire... In all its fiery monotony this picture was repeated the whole way to Skopje... For two days before my arrival in Skopje the inhabitants had woken up in the morning to the sight, under the principal bridge over the Vardar- that is, in the very centre of the town- of heaps of Albanian corpses with severed heads. Some said that these were local Albanians, killed by the komitadjis [cjetniks], others that the corpses were brought down to the bridge by the waters of the Vardar. What was clear was that these headless men had not been killed in battle. [7]

Prior to the outbreak of the First Balkan War, the Albanian nation was fighting for a national state. At the end of 1912, after the Porte recognised the autonomy of Albania, the Balkan League (comprising three neighboring states: Serbia, Montenegro and Greece; along with Bulgaria) jointly attacked the Ottoman Empire and during the next few months partitioned all Ottoman territory inhabited by Albanians.[1] The Kingdom of Serbia and the Kingdom of Greece occupied most of the land of what is today Albania and other lands inhabited by Albanians on the Adriatic coast. Montenegro occupied a part of today's northern Albania around Shkodër. 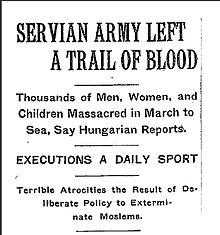 Please note that the following names of settlements are primarily listed by their Turkish language names to reflect the English name of the cities for the time in question.

The number of Albanians of Pristina killed in the early days of the Serbian government is estimated at 5,000.[5][8]

Once Ferizoviç (present-day Uroševac (Albanian: Ferizaj)) fell to Serbia, the local Albanian population gave a determined resistance. According to some reports, the fight for Ferizoviç lasted three days.[2] After the fall of the city to the Serbian Army, the Serbian commander ordered the population to go back home and to surrender the weapons. When the survivors returned, between 300-400 people were massacred.[2] Then followed the destruction of Albanian villages around Ferizoviç.[9]

After the annexation of the city to the Kingdom of Serbia, the city name was changed to Uroševac, after Stephen Uroš V of Serbia.[10] 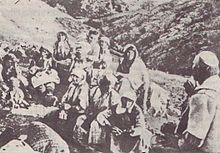 Albanian muhajirs expelled from their lands by Serb forces in 1912.

Yakova (present-day Đakovica (Albanian: Gjakova)) was mentioned among the cities that suffered at the hands of the Serbian-Montenegrin army. The New York Times reported that people on the gallows hung on both sides of the road, and that the way to Yakova became a "gallows alley."[8] In the region of Yakova, the Montenegrin police-military formation Kraljevski žandarmerijski kor, known as krilaši, committed many abuses and violence against the Albanian population.[11]

In Yakova, Serbian priests carried out a violent conversion of Albanian Catholics to Serbian Orthodoxy.[12] Vienna Neue Freie Presse (20 March 1913) reported that Orthodox priest with the help of military force convert 300 Đakovica Catholics in the Orthodox faith, and that Franciscan Pater Angelus, who refused to renounce his faith, was tortured and then killed with bayonets. The History Institute in Pristina has claimed that Montenegro converted over 1,700 Albanian Catholics in the Serbian Orthodox faith in the area of Đakovica in March 1913.[13]

After the Serbian army achieved control over the city of Prizren, it imposed repressive measures against the Albanian civilian population. Serbian detachments broke into houses, plundered, committed acts of violence, and killed indiscriminately.[2] Around 400 people were "eradicated" in the first days of the Serbian military administration.[2] During those days bodies were lying everywhere on the streets. According to witnesses, during those days around Prizren lay about 1,500 corpses of Albanians.[5] Foreign reporters were not allowed to go to Prizren.[5] After the operations of the Serbian military and paramilitary units, Prizren became one of the most devastated cities of the Kosovo vilayet and people called it "the Kingdom of Death".[5] Eventually, General Božidar Janković forced surviving Albanian leaders of Prizren to sign a statement of gratitude to the Serbian king Peter I Karađorđević for their liberation.[5] It is estimated that 5,000 Albanians was massacred in the area of Prizren.[5]

When General Janković saw that the Albanians of Luma would not allow Serbian forces to continue the advance to the Adriatic Sea, he ordered the troops to continue their brutality.[2] The Serbian army massacred an entire population of men, women and children, not sparing anyone, and burned 27 villages in the area of Luma.[5] Reports spoke of the atrocities by the Serbian army, including the burning of women and children related to the stack of hay, within the sight of fathers.[2] Subsequently, about 400 men from Luma surrendered to Serbian authorities, but were taken to Prizren, where they were murdered.[2] The Daily Telegraph wrote that "all the horrors of history have been outdone by the atrocious conduct of the troops of General Jankovic".[2]

The second Luma massacre was committed the following year (1913). After the London Ambassador Conference decided that Luma should be within the Albanian state, the Serbian army initially refused to withdraw. Albanians raised a great rebellion in September 1913, after which Luma once again suffered harsh retaliation from the Serbian army. A report of the International Commission cited a letter of a Serbian soldier, who described the punitive expedition against the rebel Albanians[1]:

"My dear Friend, I have no time to write to you at length, but I can tell you that appalling things are going on here. I am terrified by them, and constantly ask myself how men can be so barbarous as to commit such cruelties. It is horrible. I dare not tell you more, but I may say that Luma (an Albanian region along the river of the same name), no longer exists. There is nothing but corpses, dust and ashes. There are villages of 100, 150, 200 houses, where there is no longer a single man, literally not one. We collect them in bodies of forty to fifty, and then we pierce them with our bayonets to the last man. Pillage is going on everywhere. The officers told the soldiers to go to Prizren and sell the things they had stolen."

Italian daily newspaper Corriere delle Puglie wrote in December 1913 about official report that was sent to the Great Powers with details of the slaughter of Albanians in Luma and Debar, executed after the proclamation of the amnesty by Serbian authorities. The report listed the names of people killed by Serbian units in addition to the causes of death: by burning, slaughtering, bayonets, etc. The report also provided a detailed list of the burned and looted villages in the area of Luma and Has.[14]

Leo Trotsky, one of the leading figures of the Russian revolution, was sent as a journalist to cover Balkan Wars in Serbia, Bulgaria and Romania. In his report sent to Kiev newspaper "Kievskaya Misl" he writes about many "atrocities committed against the Albanians of Macedonia and Kosovo in the wake of the Serb invasion of October 1912".[15] Among other instances he tells a shocking case of drunken Serbian soldiers torturing two young Albanians. "Four soldiers held their bayonets in readiness and in their midst stood two young Albanians with their white felt caps on their heads. A drunken sergeant – a komitadji – was holding a kama (a Macedonian dagger) in one hand and a bottle of cognac in the other. The sergeant ordered: ‘On your knees!’ (The petrified Albanians fell to their knees. ‘To your feet!’ They stood up. This was repeated several times. Then the sergeant, threatening and cursing, put the dagger to the necks and chests of his victims and forced them to drink some cognac, and then… he kissed them...", shows an excerpt from the report.[15]

Mark Mazower, who has written extensively on Balkan history, in his work The Balkans, From the End of Byzantium to the Present Day (for which he won the Wolfson History Prize which "promotes and encourages standards of excellence in the writing of history for the general public") claims:

In the former Ottoman districts of Kosovo and Monastir, in particular, the conquering Serb army killed perhaps thousands of civilians. Despite some Serb officer's careless talk of “exterminating” the Albanian population, this was killing prompted more by revenge than genocide.

Henrik August Angel, a Norwegian military officer and writer who personally followed the trail of the Ottoman army and army of Kingdom of Serbia, in his work[17] described demonization of Serbs in texts published in newspapers on English, and especially on German in newspapers from Germany and Austria-Hungary, as "shameful injustice".[18] 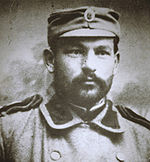 As a result of the Treaty of London in 1913 which legally awarded the former Ottoman lands to Serbia, Montenegro and Greece (namely, the large part of the Vilayet of Kosovo being awarded to Serbia), an independent Albania was recognised. As such, Greece, Serbia and Montenegro agreed to withdraw from the territory of the new Principality of Albania. The principality however included only about half of the territory populated by ethnic Albanians and a large number of Albanians remained in neighboring countries.[20]

These events have greatly contributed to the growth of the Serbian-Albanian conflict.[21]