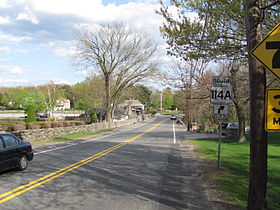 Route 114A begins as Mink Road at an intersection with Route 114 in East Providence. It crosses into the Massachusetts town of Seekonk after 0.1 miles (0.16 km) and continues north as Mink Street then Fall River Avenue through Seekonk center. Route 114A continues north back into Rhode Island, where it ends back at Route 114, which is overlapped with U.S. Route 1A (US 1A) at this point in East Providence.

Route 114A was not commissioned until some time in the 1960s.[citation needed]