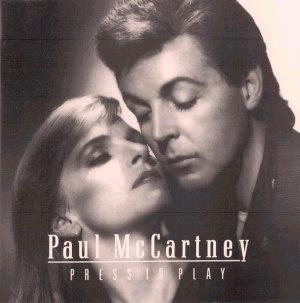 Press to Play is an album by released in 1. It is notable for being his first album of entirely new music since 's "Pipes of Peace" and his first album released internationally by long-time label after a brief alliance with in the United States and Canada. Some listeners and critics regard the album as one of McCartney's finest solo efforts, while others including Paul McCartney himself, regard it as one of his weakest. Opinions remain polarised as of .

After the box office flop of the film "", McCartney decided that it was time for a change of pace in his career. In an attempt to give his music a more contemporary sound, he joined forces with , an in-demand producer famed for having recorded , Genesis, , , and . Beginning in March 1985, McCartney began recording "Press To Play", having written several new songs, many with current collaborator, former member . Guesting on the album would be , , ('s keyboard maestro) and Stewart himself.

The album would not be finished until the end of the year, by which time only one song would see release from its sessions - the title track to the film "Spies Like Us", joined by in the producer's chair. "Spies Like Us", a non-album single backed by Wings' 1975 recording "My Carnival", proved to be a U.S. Top 10 hit (and McCartney's last), setting the stage for "Press To Play".

"Press", a slick up-tempo pop song, was released in July 1986 and surprisingly became only a Top 30 hit in the UK and United States. "Press To Play" itself appeared in September to the most positive reviews McCartney had received in years and stunned everyone by being his weakest-selling album of his solo career. Peaking at #8 in the UK, its chart life was brief, while in the U.S., "Press to Play" failed to even go gold, cresting at an underwhelming #30. Follow-up singles, "Pretty Little Head" and "Only Love Remains" performed poorly at retail.

In 1993, "Press To Play" was remastered and reissued on CD as part of "The Paul McCartney Collection" series with his 1985 hit "Spies Like Us" and an alternate mix of impending 1987 UK success "" as bonus tracks.

All songs by /, except where noted.