The Mason–Dixon Line (or Mason and Dixon's Line) was surveyed between 1763 and 1767 by Charles Mason and Jeremiah Dixon in the resolution of a border dispute between British colonies in Colonial America. It forms a demarcation line among four U.S. states, forming part of the borders of Pennsylvania, Maryland, Delaware, and West Virginia (then part of Virginia). In popular usage, especially since the Missouri Compromise of 1820 (apparently the first official use of the term "Mason's and Dixon's Line"), the Mason–Dixon Line symbolizes a cultural boundary between the Northeastern United States and the Southern United States (Dixie) and legality of slavery as a result, although the Missouri Compromise Line had much more definitive geographic connection to slavery in the United States leading up to the Civil War.[1]

Maryland's charter granted the land north of the entire length of the Potomac River up to the 40th parallel. A problem arose when Charles II granted a charter for Pennsylvania. The grant defined Pennsylvania's southern border as identical to Maryland's northern border, the 40th parallel. But the terms of the grant clearly indicate that Charles II and William Penn assumed the 40th parallel would intersect the Twelve-Mile Circle around New Castle, Delaware when in fact it falls north of Philadelphia, the site of which Penn had already selected for his colony's capital city. Negotiations ensued after the problem was discovered in 1681. A compromise proposed by Charles II in 1682, which might have resolved the issue, was undermined by Penn receiving the additional grant of the 'Three Lower Counties' along Delaware Bay, which later became the Delaware Colony, a satellite of Pennsylvania. These lands had been part of Maryland's original grant.[2]

In 1732 the proprietary governor of Maryland, Charles Calvert, 5th Baron Baltimore, signed a provisional agreement with William Penn's sons, which drew a line somewhere in between and renounced the Calvert claim to Delaware. But later, Lord Baltimore claimed that the document he had signed did not contain the terms he had agreed to, and refused to put the agreement into effect. Beginning in the mid-1730s, violence erupted between settlers claiming various loyalties to Maryland and Pennsylvania. The border conflict would be known as Cresap's War.

The issue remained unresolved until the Crown intervened in 1760, ordering Frederick Calvert, 6th Baron Baltimore to accept the 1732 agreement. Maryland's border with Delaware was to be based on the Transpeninsular Line and the Twelve-Mile Circle around New Castle. The Pennsylvania-Maryland border was defined as the line of latitude 15 miles south of the southernmost house in Philadelphia.[2]

As part of the settlement, the Penns and Calverts commissioned the English team of Charles Mason and Jeremiah Dixon to survey the newly established boundaries between the Province of Pennsylvania, the Province of Maryland, Delaware Colony, and parts of Colony and Old Dominion of Virginia.

After Pennsylvania abolished slavery in 1781, the western part of this line and the Ohio River became a border between slave and free states, although Delaware retained slavery until the Thirteenth Amendment was ratified in 1865.

Geography of the line 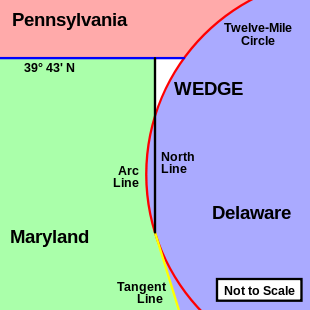 Mason and Dixon's actual survey line began to the south of Philadelphia, Pennsylvania, and extended from a benchmark east to the Delaware River and west to what was then the boundary with western Virginia.

The Maryland–Pennsylvania boundary is an east-west line with an approximate mean latitude of 39°43′20″ N (Datum WGS 84). In reality, the east-west Mason-Dixon line is not a true line in the geometric sense, but is instead a series of many adjoining lines, following a path between latitude 39°43′15″ N and 39°43′23″ N. 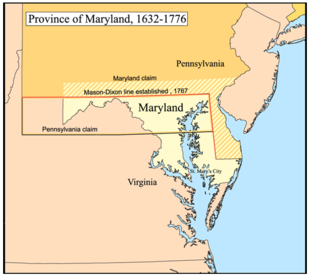 The surveyors also extended the boundary line to run between Pennsylvania and colonial western Virginia (which became West Virginia during the American Civil War, on June 20, 1863), though this was contrary to their original charter; this extension of the line was only confirmed later (see Yohogania County for details).

The Mason–Dixon Line was marked by stones every mile and "crownstones" every five miles, using stone shipped from England. The Maryland side says (M) and the Delaware and Pennsylvania sides say (P). Crownstones include the two coats-of-arms. Today, while a number of the original stones are missing or buried, many are still visible, resting on public land and protected by iron cages.

Mason and Dixon confirmed earlier survey work which delineated Delaware's southern boundary from the Atlantic Ocean to the ”Middle Point” stone (along what is today known as the Transpeninsular Line). They proceeded nearly due north from this to the Pennsylvania border.

Later the line was marked in places by additional benchmarks and survey markers. The lines have been resurveyed several times over the centuries without substantive changes to Mason and Dixon's work. The stones may be a few to a few hundred feet east or west of the point Mason and Dixon thought they were; in any event, the line drawn from stone to stone forms the legal boundary.

According to Dave Doyle at the National Geodetic Survey, part of the National Oceanic and Atmospheric Administration, the common corner of Pennsylvania, Maryland, and Delaware, at The Wedge is marked by Boundary Monument #87. The marker ”MDP Corner” dates from 1935 and is offset on purpose.

and Boundary Monument #87 is on that parallel, at:

Visitors to the tripoint are strongly encouraged to first obtain permission from the nearest landowner, or use the path from the arc corner monument which is bordered by Delaware parkland most of the way, and Pennsylvania parkland the entire way. 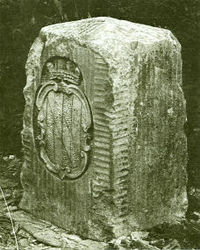 A "crownstone" boundary monument on the Mason-Dixon Line. These markers were originally placed at every 5th mile along the line, oriented with family coats of arms facing the state that they represented. The coat of arms of Maryland's founding Calvert family is shown. On the other side are the arms of William Penn.

The line was established to end a boundary dispute between the British colonies of Maryland and Pennsylvania/Delaware. Maryland had been granted the territory north of the Potomac River up to the fortieth parallel. Pennsylvania's grant defined the colony's southern boundary as following Twelve Mile Circle counter-clockwise from the Delaware River until it hit "the beginning of the fortieth degree of Northern latitude." From there the boundary was to follow the fortieth parallel due west for five degrees of longitude. But the fortieth parallel does not in fact intersect the Twelve Mile Circle, instead lying significantly farther north. Thus the Pennsylvania's southern boundary as defined in its charter was contradictory and unclear. The most serious problem was that the Maryland claim would put Philadelphia, which became the major city in Pennsylvania, within Maryland.[2]

Appointed as Secretary of the Boundary Commission in 1750, Benjamin Chew, Esq. represented the Penn family for the following seventeen years in their boundary dispute with first Charles Calvert, 5th Baron Baltimore and then his son Frederick Calvert, 6th Baron Baltimore of Maryland until it was peacefully resolved in 1767.[3] The boundary was fixed as follows:[citation needed]

The disputants engaged an expert British team, astronomer Charles Mason and surveyor Jeremiah Dixon, to survey what became known as the Mason–Dixon Line. It cost the Calverts of Maryland and the Penns of Pennsylvania £3,512/9 s to have 244 miles (393 km) surveyed with such accuracy. To them the money was well spent, for in a new country there was no other way of establishing ownership.[4][5]

The Mason-Dixon line is made up of four segments corresponding to the terms of the settlement:

The most difficult task was fixing the Tangent Line, as they had to confirm the accuracy of the Transpeninsular Line mid-point and the Twelve-Mile Circle, determine the tangent point along the circle, and then actually survey and monument the border. They then surveyed the North and Arc Lines. They did this work between 1763 and 1767. This actually left a small wedge of land in dispute between Delaware and Pennsylvania until 1921.[citation needed]

In April 1765, Mason and Dixon began their survey of the more famous Maryland-Pennsylvania line. They were commissioned to run it for a distance of five degrees of longitude west from the Delaware River, fixing the western boundary of Pennsylvania (see the entry for Yohogania County). However, in October 1767, at Dunkard Creek near Mount Morris, Pennsylvania, nearly 244 miles (393 km) west of the Delaware, their Iroquois guides refused to go any further, having reached the border of their lands with the Lenape, with whom they were engaged in hostilities. As such the group was forced to quit, and on October 11, they made their final observations 233 miles (375 km) from their starting point.[6]

In 1784, surveyors David Rittenhouse and Andrew Ellicott and their crew completed the survey of the Mason-Dixon line to the southwest corner of Pennsylvania, five degrees from the Delaware River.[7] Other surveyors continued west to the Ohio River. The section of the line between the southwestern corner of Pennsylvania and the river is the county line between Marshall and Wetzel counties, West Virginia.[citation needed]

The boundary between Pennsylvania and Maryland was resurveyed in 1849, then again in 1900.[citation needed]

On 14 November 1963, during the bicentennial of the Mason–Dixon Line, U.S. President John F. Kennedy opened a newly completed section of Interstate 95 where it crossed the Maryland-Delaware border. It was one of his last public appearances before the one in Dallas, Texas, where he was assassinated. The Delaware Turnpike and the Maryland portion of the new road were later designated as the John F. Kennedy Memorial Highway.

Systematic errors and experiments to weigh the earth

Mason and Dixon could only do the work as accurately as they did due to the work of Nevil Maskelyne, some of whose instruments they used.[8] There was keen interest in their work and much communication between the surveyors, Maskelyne and other members of the British Scientific establishment in the Royal Society in England, notably Henry Cavendish.[9][10][11] During such survey work it is normal to survey from point to point along the line and then survey back to the starting point which with no errors would coincide.[12] Normally the return errors would be random – i.e. the return survey errors compared to the intermediate points back to the start point would be spacially randomly distributed around the start point.[13] Mason and Dixon found that there were larger than expected systematic errors, that is non random, that led the return survey consistently in one direction away from the starting point.[14] When this information got back to the Royal Society members, Henry Cavendish realised that this may have been due to the gravitational pull of the Allegheny Mountains deflecting the theodolite plumb-bobs and spirit levels.[9][15][16] Maskelyne proposed measuring the gravitational force deflection induced by the pull of a nearby mountain upon a plumb-bob in 1772 and sent Mason (who had returned to England) on a site survey through central England and Scotland to find a suitable location during the summer of 1773.[17][18][19] Mason selected Schiehallion at which to conduct what became known as the Schiehallion experiment which was carried out primarily by Maskelyne and determined the density of the Scottish mountain.[8][18][19] Several years later Cavendish used a very sensitive torsion balance to carry out the Cavendish experiment and determine the density of the Earth.[16]

Mason & Dixon is the title of an acclaimed 1997 novel by American author Thomas Pynchon.[20] The novel meanders widely through the lives of Mason & Dixon, traditional American history and other themes such as hollow earth theory, geomancy, deism and alien abduction.[21]

The lives of Charles Mason and Jeremiah Dixon are the subject of Sailing to Philadelphia, the title track on Mark Knopfler’s 2000 second solo album.[22] In part inspired by Thomas Pynchon's novel, the song is a duet with James Taylor, where the two protagonists speak of their hopes and fears as they arrive on the ship in the new world for the first time.[23]

Mason "The Line" Dixon is a leading character in Rocky Balboa,[24] the sixth and final film in the Rocky franchise, directed by and starring Sylvester Stallone. Played by real-life boxer Antonio Tarver, Dixon is the current World Heavyweight Champion who is ridiculed for having never gone up against a real contender, and who thus agrees to an exhibition fight against the near 60 year old Rocky Balboa.[25]