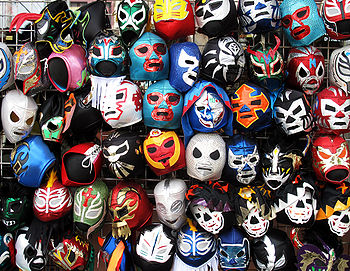 A selection of wrestling masks sold at stores.

In 1915 a North American wrestler became the first masked wrestler ever when Mort Henderson started wrestling as the "Masked Marvel" in the New York area. In the subsequent years many wrestlers would put on a mask after they had been used in an area, or territory, that their popularity and drawing ability diminished, it would be an easy way for a wrestler to begin working in a new area as a "fresh face". Sometimes workers wore masks in one territory and unmasked in another territory in order to keep their two identities separate.

The mask in the U.S. and Canada

Today, masked wrestlers are not a common sight in the United States and Canada, but masked wrestlers have a long history in that region, dating back to 1915. North American wrestling also use the mask for a different purpose, putting the mask on a well known wrestler in a storyline / angle that forces the wrestler to wear the mask to get around various "stipulations" or to betray a trust without revealing an identity. For instance wrestlers who are suspended in a storyline return under a mask usually with it being very obvious who is under the mask. Examples of this include: Hulk Hogan as Mr. America, Dusty Rhodes as The Midnight Rider, André the Giant as Giant Machine, Brian Pillman as The Yellow Dog, The Miz as The Calgary Kid and John Cena as Juan Cena

In the past many wrestlers have had very successful careers while masked such as Mr. Wrestling, Masked Superstar and the Spoiler. In the territory days it was not uncommon for more than one person or team to use the same gimmick and mask and as such there has been several masked "Interns", "Assassins" and "Executioners" working. Especially tag team wrestling have seen their share of masked teams, utilizing identical masks to create unity between wrestlers. Successful masked teams include the Masked Assassins, Blue Infernos and the Grapplers.

The mask in Lucha Libre 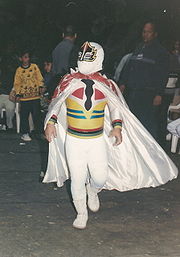 Mascarita Sagrada wearing a mask that covers his entire face.

It is a common misconception that masks in Lucha Libre spring from the Aztec, Inca or Mayan tradition but the mask, or "Máscara" in Spanish, was first introduced in Mexico when promoter saw American wrestler "Cyclone" McKey working in Texas and decided to bring McKey to work for his promotion, Empresa Mexicana de la Lucha Libre (EMLL). The Mexican fanbase quickly took to the mystery of the masked man and soon after Mexican wrestlers themselves started wearing masks, becoming "Enmáscarados". Early masks were simplistic with strong, basic colors designs that could be recognized even in the back row of the arena. Over the years the masks evolved to become very intricate and colorful drawing on Mexico's rich history. Unlike in other parts of North America the popularity of the masked wrestlers has not waned over the years, with souvenir masks being sold at events and online. In modern lucha libre, masks are colorfully designed to evoke the images of animals, gods, ancient heroes, and other archetypes, whose identity the luchador takes on during a performance. Most wrestlers in Mexico start their career wearing a mask, but over the span of their careers a substantial number of them will be unmasked. Sometimes, a wrestler slated for retirement will be unmasked in his one of his final bouts or at the beginning of a final tour, signifying loss of identity as that character. Sometimes, losing the mask signifies the end of a gimmick with the wrestler moving on to a new gimmick and mask, often without public acknowledgement of the wrestler's previous persona.

The wrestling mask is considered "sacred", so much so that the intentional removal of a mask is grounds for disqualification. If a wrestler is unmasked during the match their top priority is to cover up their face and usually gets help from people at ringside to hide his face. Most masked wrestlers wear their masks for any and all public appearances using the mask to keep their personal life separate from their professional life. Because of the mask most Mexican wrestlers also enjoy a higher degree of anonymity about their personal life. Some wrestlers become larger than life characters such as El Santo, one of the most popular cultural icons who always wore his mask in public, revealed his face only briefly in old age, and was even buried in his trademark silver mask.

In Lucha Libre the highest achievement is not winning a championship but winning the mask of an opponent in a "Luchas de Apuestas" match, a "bet fight" where each wrestler bets their mask. The Luchas de Apuestas match is usually seen as the culmination of a long and heated storyline between two or more wrestlers with the winner getting the "ultimate victory". After losing a match of this time the wrestler must reveal his real name, where he's from and how long he has been a wrestler before taking the mask off to show his face. Unmasked wrestlers will wager their hair instead, risking having his or her head shaved bald in case of defeat. There can be several reasons to book a "Luchas de Apuestas" match beyond the obvious purporse of elevating the winner. If the loser is a younger wrestler then the loss of the mask can sometimes lead to a promotional push after unmasking, or the wrestler is being given a new ring persona. Older wrestlers often lose their masks during the last couple of years of their career, often for a big payday depending on how long and successful a career they've had, The more successful the wrestler that's unmasked the bigger the honor for the winner.

The first luchas de apuestas match was presented on July 14, 1940 at Arena México. The defending champion Murciélago was so much lighter than his challenger Octavio that he requested a further condition before he would sign the contract: Octavio would have to put his hair on the line. Octavio won the match and Murciélago unmasked, giving birth to a tradition in lucha libre.[1] 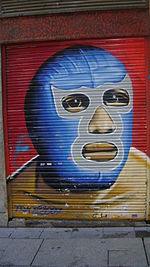 The mask in Japanese wrestling

The Destroyer was the first masked wrestler to work in Japan during the 1960s but remained a novelty with very few Japanese wrestlers choosing to wear a mask. In the 1970s Mil Máscaras became the first Luchador to work on a regular basis and became very popular with the fans. the original Tiger Mask, Satoru Sayama was inspired by Mil Máscaras to create the masked "Tiger Mask" persona. After the success of Tiger Mask several wrestlers have adopted the mask, mainly lighter wrestlers who like Sayama had a more high flying and flashy style. The wrestling mask is held in more regard by the Japanese fans than the North American fans but isn't as "sacred" as the Mexican mask. Famous Japanese masked wrestlers include Jushin Liger, Último Dragón, El Samurai, the Great Sasuke and Dragon Kid.

Anatomy of the wrestling mask 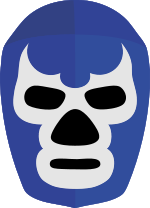 The original wrestling masks were often masks attached to a top that snapped in the groin making it very uncomfortable for the people wearing it. If the masks were not attached to the top, then they were made from uncomfortable material such as brushed pig skin, leather or suede. It wasn't until a Mexican shoe maker called Antonio Martinez created a mask on request from Charro Aguayo that would become the standard for wrestling masks created since then. The basic design has not changed much over the years, consisting of four pieces of fabric sewn together to create the basic shape that covers the entire head. The mask has openings for the eyes, nose and mouth with colorful trim around the open features, this trim is known as "Antifaz" in Spanish. The back of the mask is open with a "tongue" of fabric under laces to keep it tight enough to not come off accidentally during a match. The first variation in style came when the jaw and mouth area was removed from the mask to expose the skin. Other masks have solid material over the mouth, nose, eyes or all three, in the case of fabric covering the eyes a stretched fabric that is see through up-close is used.

Originally being made from fabric masks have evolved and are now made from a variety of materials from cotton to nylon to various vinyls in all the shades of the rainbow. Several additions have been made to the mask decorations over the years with the most prevalent and visually striking being foam horns and fake hair attached to the mask. Artificial ears are also commonly used, especially if the mask has an animal motif such as a tiger.