Bionicle: Mask of Light: The Movie

Bionicle: Mask of Light: The Movie

Bionicle: Mask of Light: The Movie is the first direct-to-video Bionicle film based on the Lego toy series, made by Miramax Films with the help of Lego. It has sold over 40 million copies worldwide since its release.[1]

The movie revolves around the latter half of the 2003 storyline, on the island called Mata Nui. The spirit protecting the island was put into a deep sleep, and only the Mask of Light, in the hands of two Matoran who are assisted by six Toa, can return it to the Toa of Light before it is too late.

The direct-to-video sales made Mask of Light one of the top selling DVDs of 2003 in the United States, and has helped the development of three more movies in the franchise. It was praised for its visual effects and sound direction, but thought to be average in its storyline and character development.[2] The movie was followed by three sequels Bionicle 2: Legends of Metru Nui, Bionicle 3: Web of Shadows, and Bionicle: The Legend Reborn.

Mask of Light is a LEGO/MIRAMAX production in association with Creative Capers Entertainment, CGCG and Wang Film Productions.

The story begins with a retelling of the original BIONICLE legend. The story then shifts to the fortress village of Ta-Koro, which is located in a lake of lava. A Ta-Matoran named Jaller is looking for his Kohlii (a lacrosse-like game) teammate, Takua. He soon finds him inspecting a warning totem next to a lava flow. Just before they leave, Takua picks up the totem, unwittingly setting off a booby trap. He drops the artifact into the lava, revealing a Kanohi mask that was embedded in the totem. At that moment, a wave of lava began to rush through the chamber at Takua. He throws the mask to Jaller and tries to use a lavaboard to cross the lava, but only got halfway. Just as he was about to be killed, he was saved by Tahu, the Toa of Fire. Takua and Jaller then rushed to the Kohlii field, and Jaller puts the mask in his pack. After the match had ended, the mask Takua found falls out of Jaller's pack, shining a bright light on Jaller. The Turaga reveal that this is the Mask of Light which is to be worn by a legendary Seventh Toa that will defeat Teridax (Makuta). The Mask of Light will lead its herald the Seventh Toa. But Takua, who was thought to be the Herald, was unwilling to admit it so Jaller was mistakenly believed to be so. Unfortunately for Takua, he still has to come along to chronicle Jaller’s quest. Pohatu, the Toa of Stone, left to spread word about the Seventh Toa, while Gali, the Toa of Water, had already departed. The two Matoran leave Ta-Koro the next day and followed the mask’s light to jungle region of Le-Wahi.

Deep beneath Mata Nui, Teridax was fully aware of what is happening above. He spoke to a large statue of a Kanohi Mask, which he refers to as his brother, Mata Nui. He then decided to release three of his spawns of shadow, the Rahkshi, to find and destroy the Herald. On the surface, Gali was meditating at Kini-Nui, the Great Temple, when the Rahkshi burst from the center of the temple and attack her. She narrowly escapes by hiding in the river. Realizing the Rahkshi are headed for Ta-Koro, she hurried there and warned the villagers. The Rahkshi burst through the walls of Ta-Koro, using their powers of shattering (Panrahk), disintegration (Guurahk), and poison (Lerahk) to eventually destroy the village. Fortunately, all the Matoran escape unharmed. In the fight, Tahu's mask is damaged by Gali when she tried to get Lerahk off of him, leaving a sickly green scratch. However, he was more concerned about his village's destruction.

Meanwhile, Takua and Jaller were traveling through the jungle of Le-Wahi, going where the Mask of Light shows them to go. They are then attacked by a Graalok ash bear and rescued by Lewa, the Toa of Air. He gave them a faster way of traveling, a Gukko bird, which quickly carried them to the frozen region of Ko-Wahi. Upon their arrival, they learn of Ta-Koro's destruction. Lewa then flies to Ta-Wahi to learn more, leaving Takua and Jaller behind. They got caught in a blizzard where they encounter Bohrok that are frozen, and ran into Kopaka, Toa of Ice. Upon arriving at Ko-Koro, they are attacked by the Rahkshi, and escaped down the side of a mountain. Kopaka is knocked out in the escape, and Takua tries to lure them away across a lake. Just as the Rahkshi close in, Kopaka awakens and froze the Rahkshi in the lake. Kopaka then leaves to see to his village and the Matoran leave for the underground region of Onu-Wahi.

In the Onu-Koro Highway, an unused underground network of tunnels, Takua gets lost. He was surprised by Teridax, who appeared before him in the form of two glowing red eyes. He warned Takua that if he does not give him the mask, Jaller will die. Takua refuses, but later panics and leaves Jaller and the mask behind. He arrives in the village of Onu-Koro in time to find Pohatu and Onua, the Toa of Earth, telling the village about the Seventh Toa. However, three more Rahkshi—with the power of fear (Turahk), anger (Kurahk), and hunger (Vorahk)—appear, sent by Teridax in response to Takua's refusal of his good will. As the Matoran were forced to flee from their village, Takua feels that this was his fault as the Rahkshi are after him for being the true Herald. Tahu, Gali, and Lewa arrive. However, Tahu's scar has gotten worse. When he was hit by Kurahk’s anger energy, the poison and the anger caused him to attack Gali. He was stopped when Kopaka arrived and froze him. Meanwhile, Pohatu and Onua caused a cave-in, and the Toa are forced to flee the village. Gali, Kopaka, and Lewa later have Tahu bound to a rock and free him from his madness.

Takua finds Jaller and the two head for the Kini Nui, where the mask says the Seventh Toa would be found. However, the six Rahkshi caught up to them. The Toa arrive and defeat all the Rahkshi except Turahk. Turahk then tried to kill Takua, only for Jaller to take the blow instead. As the dying Jaller tells Takua how he was "always different", the Chronicler realizes that he wasn't the Herald, but rather the Seventh Toa himself. Takua puts on the Mask of Light and the Toa of Light, renaming himself Takanuva. He destroys Turahk, and then builds a vehicle out of the Rahkshi’s armor, called the Ussanui - powered by the discarded Kraata of the Rahkshi - and flies down to Teridax's lair. After a mock Kohlii match (played using a ball made of a substance called protodermis) in which Takanuva prevailed using his special Kohlii move from earlier to knock the Makuta clean through a wall, Teridax claims he will protect Mata Nui from the Toa of Light stating that "sleep spares him pain; awake, he suffers." When Takanuva tries to rip Teridax's Mask of Shadows off of his face, they fell into a pool of protodermis and emerged as Takutanuva. The combined being leads the Matoran, Turaga, and Toa (who had been led down to witness Teridax's defeat by Hahli, a Ga-Matoran and close friend of Jaller), through a gate in the Kanohi mask statue. Takutanuva, who is holding the gate up, resurrected Jaller by transferring part of his energy into Jaller’s mask. However, this transfer weakened Takutanuva and the door crushed him. As the dust cleared, only the Mask of Light remained. Takanuva is then revived as well, and his light makes a hole in the cavern, revealing the long lost city of Metru Nui. 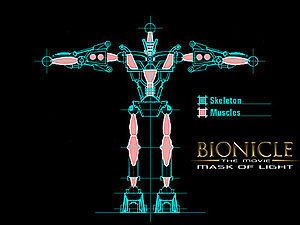 Structure of a character in production

Miramax and Lego made a partnership in 2002 to develop and distribute three Bionicle movies.[3] The directors Terry Shakespeare and David Molina noted that there were several already existing interpretations of the Bionicle look, including the flash web comic, comic book, and CG commercials, and eventually decided to base it on the CG commercial look. After attending several days of "Bionicle school" in Denmark, they were given a grounding in how they were developed. Several features were redesigned for the movie, including the introduction of a movable mouth to allow for a more human character. Also, the characters such as the Toa Nuva were redesigned, beginning with the creation of a skeleton and muscles.[4] For the design, Shakespeare noted that "The first film had primary colors that were coded to the areas and a younger feel."[5]

Two scripts for the Bionicle movie were created, one by writer Alastair Swinnerton (also one of the original Bionicle creators) and one from the other, Henry Gilroy, to see who would write the better script. Due to time constraints, however, the Gilroy script was accepted with some of Alastair's ideas included. He reported that the creator Bob Thompson, who had reportedly had some of the characters in mind for years. "I really made it my duty to stick close by his vision, while bringing my ideas of comical character and big screen action, all the while staying true to the LEGO ideals of construction and community."[6] The Lego Company insists they would "never compromise their values for the bottom line."[7] The movie was also an occasion for the expansion of the Bionicle universe by the addition of the Rahkshi and its line of toys.[8]

The film premiered on September 13, 2003, at Legoland in Carlsbad, California, which featured a huge mosaic built of Lego and a special effects show.[9] The DVD was one of the ten best selling premiere DVDs of 2003. Cartoon Network acquired the license to broadcast Mask of Light, airing for the first time on April 17, 2004 for the Saturday night block premiere of Toonami. A preview for Bionicle 2: Legends of Metru Nui was shown at the end of the premiere, which several hours before the movie premiered, the Bionicle website posted a question for the fans to quote Vakama's speech during the sneak peak in order to obtain special content on the website's Kanoka Club page.[10]

Entertainment Weekly gave the first Bionicle movie a "B+"[11] The film was thought to be spectacular with its visual effects and sound mix, but lacking in dynamic characters, and possessing a simple plot,[2] though others thought that thanks to skilled voice acting, the characters were allowed to grow.[12] The assumption that people are already familiar with the story made it difficult to follow for the uninitiated.[13] Some reviewers noted references to Raiders of the Lost Ark, Harry Potter and Peter Jackson's The Lord of the Rings lauded film trilogy (whose final film was released in December later the same year) throughout the story.[14] A video game based on the movie was released on the PlayStation 2, Nintendo GameCube, Xbox, and Game Boy Advance receiving below average reviews.[15] There was also a novelization of the film and a line of toys from it.[16]