The Maschinengewehr 34, or MG 34, is a German air-cooled machine gun that was first produced and accepted into service in 1934, and first issued to units in 1935. It accepts the 8x57mm IS cartridge.

It was designed to perform both as a light machine gun and in heavier roles, as an early example of a general-purpose machine gun. In the light machine gun role, it can be equipped with a bipod and 50-round ammunition belt contained in a drum-shaped magazine attached to the receiver. In the heavier role, it is mounted on a larger tripod and is belt-fed. In practice, the infantry relied mainly on belt-cartridge ammunition for the bipod version, functioning as a classic medium support infantry weapon.

The MG 34 was used as the primary infantry machine gun during the 1930s, and remained as the primary tank and aircraft defensive weapon. It was to be replaced in infantry service by the related MG42, but there were never enough quantities of the new design to go around, and MG 34s soldiered on in all roles until the end of World War II. The MG 34 was intended to replace the MG13 and other older machine guns, but these were still being used in World War II as demand was never met.

It was designed primarily by Heinrich Vollmer from the Mauser Werke, based on the recently introduced Rheinmetall-designed Solothurn 1930 (MG30) that was starting to enter service in Switzerland. The principal changes were to move the feed mechanism to a more convenient location on the left of the breech, and the addition of a shroud around the barrel. Changes to the operating mechanism improved the rate of fire to between 800 and 900 rpm.

The new gun was accepted for service almost immediately and was generally liked by the troops, and it was used to great effect by German soldiers assisting Nationalist Spain in the Spanish Civil War. At the time it was introduced, it had a number of advanced features and the general-purpose machine gun concept that it aspired to was an influential one. However, the MG 34 was also expensive, both in terms of construction and the raw materials needed (49 kg (108.0 lb) of steel),[citation needed] and its manufacture was too time-consuming to be built in the numbers required for the ever-expanding German armed forces. It was the standard machine gun of the Kriegsmarine (German navy). It also proved to be rather temperamental, jamming easily when dirty.[citation needed]

Imported units of MG 34s[2], as well as indigenous copies of the weapon were adopted by Chinese Nationalist forces[3] during both World War II and the Chinese Civil War. Some models captured from the Germans by the Soviets or French were supplied to the People's Liberation Army/People's Volunteer Army, Korean People's Army, PAVN and the Viet Cong over the Cold War.

The MG 34 could use both magazine-fed and belt-fed 7.9 mm ammunition. Belts were supplied in a fixed length of 50 rounds, but could be linked up to make longer belts for sustained firing. A 250 round belt was also issued to machine guns installed in fixed emplacements such as bunkers. Ammunition boxes contained 250 rounds in five belts that were linked to make one continuous 100 round belt and one 150 round belt. The assault drums held a 50-round belt, or a 75-round "double drum" magazine could be used by replacing the top cover with one made specially for that purpose. A gun configured to use the 75-round magazine could not be returned to belt-feed mode without changing the top cover again. All magazine-feed MG 34s had been withdrawn from infantry use by 1941, with some remaining in use on armoured personnel carriers.

Like most machine guns, the MG 34's barrel is designed to be easily replaced to avoid overheating during sustained fire. During a barrel change, the operator would disengage a latch which held the receiver to the barrel sleeve. The entire receiver then pivoted off to the right, allowing the operator to pull the barrel out the back of the sleeve. A new barrel would then be put in the back of the sleeve, and the receiver rotated back in line with the barrel sleeve and latched. The entire process took just a few seconds when performed by a well-trained operator, causing minimal downtime in battle.[4] 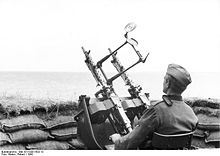 A unique feature of the MG 34 was its double-crescent trigger, which provided select fire capability without the need for a fire mode selector switch. Pressing the upper segment of the trigger produced semi-automatic fire, while holding the lower segment of the trigger produced fully automatic fire.[5] Though considered innovative at the time, the feature was eliminated due to its complexity on the MG 34's successor, the MG42.

In the light-machine gun role, it was used with a bipod and weighed only 12.1 kg (26.7 lb). In the medium-machine gun role, it could be mounted on one of two tripods, a smaller one weighing 6.75 kg (14.9 lb), the larger 23.6 kg (52.0 lb). The larger tripod, the MG 34 Laffette, included a number of features, such as a telescopic sight and special sighting equipment for indirect fire. The legs could be extended to allow it to be used in the anti-aircraft role, and when lowered, it could be placed to allow the gun to be fired "remotely" while it swept an arc in front of the mounting with fire, or aimed through a periscope attached to the tripod. 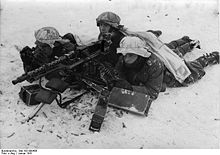 Soldiers of the German Großdeutschland regiment man a heavy MG 34 on a stationary tripod mount. 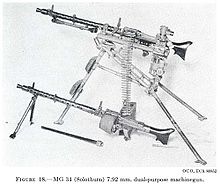 Most German tanks used during World War II used the MG 34 Panzerlauf for secondary armament. The MG 42 was ill-suited for internal/coaxial mounting due to the method of barrel change. The main difference of the MG 34 Panzerlauf and the regular MG 34 was the heavier almost solid armored barrel shroud, almost completely lacking the ventilation holes of the basic MG 34. When mounted inside a tank, the MG 34 also lacked a butt-stock. A kit for quick conversion to ground use was carried inside the tank containing a butt-stock and a combined bi-pod and front sight assembly.

The MG 34 was also used as the basis of a new aircraft-mounted machine gun, the MG 81. For this role, the breech was slightly modified to allow feeds from either side, and in one version, two guns were bolted together on a single trigger to form a weapon known as the MG 81Z (for zwilling, German for "twin" as in twin-mounted). Production of the MG 34 was never enough to satisfy any of its users, and while the MG81 was a huge improvement over the earlier MG 30-based MG 15 and MG 17 guns, these guns were used until the end of the war. As the Luftwaffe lost the battle for air superiority and declined in priority in the German war effort, MG 15s and MG 81s, which were designed as flexibly mounted aircraft machine guns, were modified and adapted for ground use by infantry, with varying degrees of success.