The Maasai Mara National Reserve (also spelled Masai Mara; known by the locals as The Mara) is a large game reserve in south-western Kenya, which is effectively the northern continuation of the Serengeti National Park in Tanzania. It is named after the Maasai people (the traditional inhabitants of the area) and their description of the area when looked at from afar: "Mara", which is Maa (Maasai language) for "spotted," an apt description for the circles of trees, scrub, savanna, and cloud shadows that mark the area.

It is famous for its exceptional population of Big Cats, game, and the annual migration of zebra, Thomson's gazelle, and wildebeest from the Serengeti every year from July to October, a migration so immense that it is called the Great Migration.

In 1995, the TransMara County Council (TMCC) was formed in the Western part of the reserve, and control was divided between the new council and the existing Narok County Council. In May 2001, the not-for-profit Mara Conservancy took over management of the Mara Triangle.[2]

Giraffes on the open grassland

The Maasai Mara National Reserve (MMNR) covers some 1,510 km2 (583 sq mi)[1] in south-western Kenya. It is the northern-most section of the Mara-Serengeti ecosystem, which covers some 25,000 km2 (9,700 sq mi) in Tanzania and Kenya. It is bounded by the Serengeti Park to the south, the Siria escarpment to the west, and Maasai pastoral ranches to the north, east and west. Rainfall in the ecosystem increases markedly along a southeast–northwest gradient, varies in space and time, and is markedly bimodal. The Sand, Talek River and Mara River are the major rivers draining the reserve. Shrubs and trees fringe most drainage lines and cover hillslopes and hilltops.

The terrain of the reserve is primarily open grassland with seasonal riverlets. In the south-east region are clumps of the distinctive acacia tree. The western border is the Esoit (Siria) Escarpment of the Great Rift Valley, which is a fault line some 5,600 km (3,500 mi) long, from Ethiopia's Red Sea through Kenya, Tanzania, Malawi and into Mozambique. Wildlife tends to be most concentrated here, as the swampy ground means that access to water is always good, while tourist disruption is minimal. The easternmost border is 224 kilometres (139.2 mi) from Nairobi, and hence it is the eastern regions which are most visited by tourists. 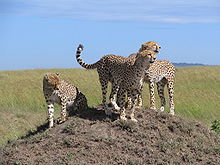 Wildebeest, topi, zebra, and Thomson's gazelle migrate into and occupy the Mara reserve, from the Serengeti plains to the south and Loita plains in the pastoral ranches to the north-east, from July to October or later. Herds of all three species are also resident in the reserve.

All members of the "Big Five" (lion, leopard, African elephant, African buffalo, and Black Rhinoceros) are found in the Maasai Mara. The population of Black rhinos was fairly numerous until 1960, but it was severely depleted by poaching in the 1970s and early 1980s, dropping to a low of 15 individuals. Numbers have been slowly increasing, but the population was still only up to an estimated 23 in 1999.[3] 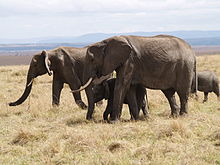 Hippopotami and Nile crocodiles are found in large groups in the Mara and Talek rivers. Leopards, hyenas, cheetahs, jackals, and bat-eared foxes can also be found in the reserve.[4] The plains between the Mara River and the Esoit Siria Escarpment are probably the best area for game viewing, in particular regarding lion and cheetah.

Leopard climbing down from a tree

As in the Serengeti, the wildebeest are the dominant inhabitants of the Maasai Mara, and their numbers are estimated in the millions. Around July of each year, these ungainly animals migrate north from the Serengeti plains in search of fresh pasture, and return to the south around October. The Great Migration is one of the most impressive natural events worldwide, involving some 1,300,000 wildebeest, 500,000 Thomson's gazelles, 97,000 Topi, 18,000 elands, and 200,000 zebras. These migrants are followed along their annual, circular route by hungry predators, most notably lions and hyena.[5] 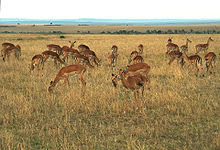 Numerous other antelopes can be found, including Thomson's and Grant's gazelles, impalas, elands, duikers and Coke's hartebeests. Large herds of zebra are found through the reserve. The plains are also home to the distinctive Masai giraffe as well as the common giraffe. The large Roan antelope and the nocturnal bat-eared fox, rarely present elsewhere in Kenya, can be seen within the reserve borders.

More than 470 species of birds have been identified in the park, many of which are migrants, with almost 60 species being raptors.[6] Birds that call this area home for at least part of the year include: vultures, marabou storks, secretary birds, hornbills, crowned cranes, ostriches, long-crested eagles, African pygmy-falcons and the lilac-breasted roller, which is the national bird of Kenya.

The Maasai Mara Reserve area is administered by Narok County Council and the Mara Conservancy (under contract to manage the Mara Triangle section of the Maasai Mara by the Trans-Mara county council), a local nonprofit organization formed by the local Maasai that contains several anti-poaching units.[7] The Maasai Mara Conservation area is administered by the Group Ranch Trusts of the Maasai community who also have their own rangers for patrolling the park area. The wildlife roam freely across both the Reserve and Conservation areas which are a continuous wildlife ecosystem. 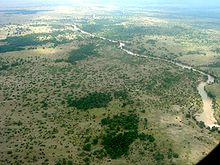 The Maasai Mara is a major research centre for the spotted hyena. With two field offices in the Mara, the Michigan State University based Kay E. Holekamp Lab studies the behavior and physiology of this predator, as well as doing comparison studies between large predators in the Mara Triangle and their counterparts in the eastern part of the Mara.[8]

Since 2008, Amanda Subalusky and Chris Dutton have been working in the Mara River Basin to help develop a trans-boundary river basin management plan between Kenya and Tanzania. In 2010, they had completed a flow assessment for the river to identify the river flows needed to provide for basic human needs of the 1 million people who depend on the water, and for ecosystem sustainment.[9] 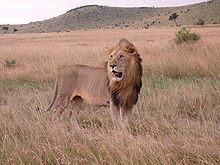 Game parks are a major source of hard currency for Kenya. Entry fees are currently US$70 for adult non-East African Residents and $30 for children.[10] As of July 2011 Entry fees will go up to $70 for adults non East African residents per day staying inside the park and $80 for adults non East African residents staying outside the park. There are a number of lodges and tented camps for tourists inside the Reserve and the Conservation area borders. The tourists/visitors cater for their own expenses, unless previously arranged by their agencies.

Although one third of the whole Maasai Mara, The Mara Triangle has only one lodge within its boundaries (compared to the numerous camps and lodges on the Narok side) and has well maintained, all weather roads. The rangers patrol regularly which means that there is almost no poaching and therefore excellent game viewing. There is also strict control over vehicle numbers around animal sightings which means a better, more authentic, experience when out on a game drive.

Balloons over the Mara.

Lodges and camps are available inside the Reserve including Keekorok. Balloon safaris are also available. Early morning departures let visitors see the vast landscape, the rising sun, and the gatherings of animals.[11]

The BBC Television show titled "Big Cat Diary" is filmed in both the Reserve and Conservation areas of the Maasai Mara. The show follows the lives of the big cats living in the reserve. The show highlights scenes from the Reserve's Musiara marsh area and the Leopard Gorge, the Fig Tree Ridge areas and the Mara River, separating the Serengeti and the Maasai Mara.

The Mara in jeopardy

Wildebeest (gnus), with zebras in distance

Hyenas with an impala and 2 vultures

A study funded by the World Wildlife Fund for Nature (WWF) and conducted by ILRI between 1989 and 2003 monitored hoofed species in the Mara on a monthly basis, and found that that losses were as high as 95 percent for giraffes, 80 percent for warthogs, 76 percent for hartebeest, and 67 percent for impala. The study blames the loss of animals on increased human settlement in and around the reserve. The article claims, "The study provides the most detailed evidence to date on the declines in the ungulate (hoofed animals) populations in the Mara and how this phenomenon is linked to the rapid expansion of human populations near the boundaries of the reserve."[12]

In the Serengeti National Park, a proposed 50-kilometre (31 mi) road from Musoma to Arusha, with tarmac touching the Serengeti, is raising criticism from scientists who say that the road will disrupt the annual migration of the wildebeest, and that this disruption would affect predators such as lions, cheetahs and African wild dogs, as well as the grasslands themselves.[13]

In late June 2011 the Tanzanian government has decided to cancel the Serngeti road plan due to global outcry.[citation needed]