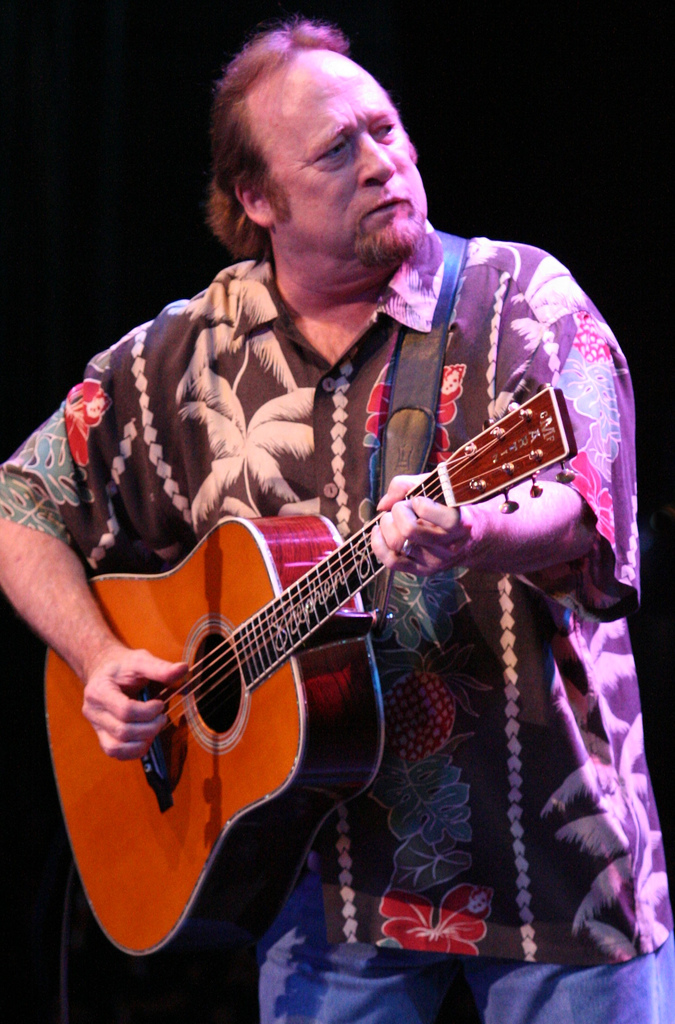 Stephen Stills was born in on January 3, 1945 to a military family. Moving around as a child, he developed an interest in and . He was also influenced by after spending his youth in Gainesville and , and the , where he graduated from .

Stills dropped out of the to pursue a music career in the early 1960s. He played in a series of unsuccessful bands including The Continentals, which featured future Eagles guitarist . Stills could also be seen singing solo in , a well-known coffee house in Greenwich Village. Stills eventually ended up in a nine-member vocal harmony group, the house act at the famous in NYC, called the Au Go Go Singers (Rick Geiger, Roy Michaels, Michael Scott, Jean Gurney, Kathy King, Nels Gustafson, Bob Harmelink, Richie Furay & Stills) where and when he met . This group also did some touring in the Catskills, and in the South, released one album in 1964, then broke up in 1965. Afterwards, Stills, along with four other former members of the Au Go Go Singers: Geiger, Michaels, Gurney & Scott, formed The Company, a folk/rock group. The Company embarked on a 6-week tour of Canada where Stills met a young guitarist named . On the "CSNY Legends" special, Stills would say that at that time, Young was doing what he always wanted to do, "play folk music in a rock band." The Company broke up in New York within four months, opening up the way for Geiger to join a light opera company in Los Angeles; Michaels to link up with Jimi Hendrix, Gurney to go on to college while doing TV commercials, and Scott to tour with a retro-Highwaymen. Stills did session work and went to various auditions (including an unsuccessful one for ). In 1966 he convinced a reluctant former Au Go Go Singer, Richie Furay, then living in Massachusetts, to move with him to California.

Stills, Furay, and Young reunited in Los Angeles and formed the core of Buffalo Springfield. Legend has it that Stills and Furay recognized Young's converted hearse on the streets of LA and flagged him down, a meeting described in the recent solo track "Round the Bend". The band would release three albums ("Buffalo Springfield", "", and "") and one hit single (Stills' "For What It's Worth") before breaking up.

Stills' guitar playing continually evolved. Early on, it displayed sources in generic rock 'n' roll, blues, and country music, as well as the chordings familiar in the acoustic-folk music scene. Soon Stills' playing showed the influence of his friend and also sometimes the rhythms and riffs of various kinds of Latin music. Stills is notorious for experimenting with the guitar itself. This includes such things as soaking strings in barbecue sauce or flipping pickups to mimic Hendrix playing a right-handed guitar left-handed. He is also known for using unconventional tunings, particularly on acoustic. He is also adept at piano, organ and bass and plays some drums. "'Stephen had a vision,' [Graham] Nash says. 'David [Crosby] and I let him run with it.' Stills played nearly every instrument on "Crosby, Stills and Nash", earning the nickname Captain Manyhands." (from RollingStone.com)

During the disintegration of Buffalo Springfield, Stills joined up with ex-Byrd and ex-Hollie to form the supergroup Crosby, Stills & Nash. invited Graham Nash over to meet Stills and David Crosby at the home of well known folk artist and painter , who painted several artworks of the three. Mitchell also contributed the artwork seen on the cover of the CSNY collection album "So Far", released in 1974. The cover photo pictured on the trio's first self-titled album in 1969 was taken on the back porch of a house in West Hollywood which was torn down the next day. Stills overdubbed much of the musical backing himself for the first CSN album with only Dallas Taylor's drums and some rhythm guitar from Crosby and Nash. Neil Young was added for their second album, and the group became Crosby, Stills, Nash, and Young. During the late 1960s and early 1970s, CSN and CSNY was one of the few n groups to rival the in popularity. Despite several breakups and reformations, CSN (and sometimes CSNY) still record and tour to this day.

Having played at the with Buffalo Springfield, and both Woodstock and Altamont with CSNY, Stills performed at all three of the iconic of the .

In the wake of CSNY's success, all four members recorded solo albums. In 1970, Stills released his self-titled debut, which featured guests , (on what was possibly his last recording before he died), "Mama" , and (credited only as "Richie") as well as contributions from various members of the CSNY band. It provided Stills with the hit single "Love The One You're With" as well as the concert favorite "Black Queen." Stills followed this with "Stephen Stills 2", which featured "Change Partners." Even though it was written before CSN formed, Nash saw this song as a metaphor for the many relationships in CSNY, while Stills viewed the band as something much less bland and repetitive.

The next year, Stills teamed up with ex-Byrd and several CSNY sidemen to form the band Manassas. With Manassas Stills recorded the self-titled double album "Manassas". The album was a mixture of blues, folk and Latin music divided into different sections, and is considered by many to be one of Stills' best albums.

During a Manassas tour in France, Stills met and married French singer-songwriter . Then he switched to , where he recorded two albums: "Stills" in 1975 and the punningly titled "Illegal Stills" in 1976. The former record found Stills in an uncharacteristically joyful mood; his marriage was going great, his son Chris had just been born, and he was happy living in . "To Mama From Christopher and the Old Man" was an exceptionally optimistic view of his new family.

In 1976, Stills attempted a reunion with Neil Young. At one point, "Long May You Run" was slated to be a CSNY record, but when Crosby and Nash left to fulfill recording and touring obligations, according to both David and GrahamFacts|date=February 2007 the other pair wiped their vocals from the recordings, as Stills and Young decided to go on without their erstwhile partners as . However, Young would leave midway through the resulting tour due to an apparent throat infection.Facts|date=February 2007 Stills was contractually bound to finish the tour, which he did, but upon returning home, his wife announced she wanted a divorce and wished to move back to France. Stills reunited with Crosby and Nash shortly afterwards, thanks to the efforts of Nash's future wife Susan, who got Nash to forgive Stills for wiping the Crosby and Nash vocals from "Long May You Run." This led to the semi-permanent CSN reunion of , which has persisted even though all three have released solo records since then. In 1978, he performed in a jam session in "".

In 1997, Stills became the first person to be inducted into the twice in the same night for his work with CSN and the Buffalo Springfield. Fender Musical Instruments crafted a custom guitar and presented it to Stills to commemorate the occasion, this Telecaster style guitar bears an inscription on the neck plate.

2005 saw Stills release "", his first solo offering in 14 years. Although not troubling the chart compilers on either side of the Atlantic, the record was critically well received and is regarded by many fans as his best since the mid seventies.

Throughout 2006 and 2007, Stills toured regularly as a solo Artist with "The Quartet," which consisted of , , , and . Often a long acoustic solo section of the show would feature songs rarely played and showcase agile finger style playing in standard and altered tunings.

CSN&Y have long been involved in liberal causes and politics. In 2000, Stills served as a member of the Democratic credentials committee from during the Democratic National Convention, and was an actual delegate in previous years. [http://web1.evote.com/news_section/2000-08/08152000Dnc.asp]

Stills was a prolific songwriter before becoming a star performer; his composition "" was a minor hit for before it was recorded by the Buffalo Springfield.

In 1966, Stills auditioned for "", but he dropped out, partially because his already-thinning hair and bad teeth made him look too old for the part, and partially because the actor's contract required him to assign his music publishing rights to , something he did not want to do. Stills instead recommended his former roommate, elson, who got the job.

Stills was a close friend of , who appears on Stills' eponymous first solo album. Reputedly, when Hendrix was forming his trio , his manager contacted Stills' manager to invite Stills to become the group's . Concerned that Stills' friendship with Hendrix and admiration for Hendrix' genius might prompt Stills to take the job rather than continue with the Buffalo Springfield, Stills' manager elected not to pass the message on to Stills. was then offered and took the job as bassist with the Experience. Within a year, both Stills and Hendrix were superstars in their own right; they continued to socialize and jam together informally up until Hendrix' untimely death in 1970.Fact|date=February 2007

Several of Stills' most notable songs, "Bluebird," "" "You Don't Have To Cry" and "Bluebird Revisited," were inspired by his intense, on-again-off-again relationship with singer . In a 1971 interview in , the interviewer noted, "so many of your songs seem to be about Judy Collins." Stills replied, "well, there are three things men can do with women: love them, suffer for them, or turn them into literature. I've had my share of success and failure at all three."

Stills' son, Justin Stills, was badly injured at age 26 in in 1997; an episode of Discovery Health's documentary series ' featured his treatment and recovery. Another son, Henry, has been diagnosed with , and is profiled in the 2007 documentary '. His son Chris and daughter Jennifer are both recording artists. His youngest son, Oliver Ragland, was born in and named in honor of Neil Young, whose maternal family name is Ragland. [http://noted.blogs.com/westcoastmusic/2004/10/stephen_stills_.html]

On December 17, 2007, Graham Nash revealed on "" that Stills has been diagnosed with early stage and that he will have an operation on January 3, 2008, his birthday. [cite web |url=http://www.rollingstone.com/rockdaily/index.php/2007/12/18/stephen-stills-diagnosed-with-prostate-cancer-according-graham-nash |title=Stephen Stills Diagnosed with Prostate Cancer, According to Graham Nash |publisher=Rolling Stone |accessdate=2007-12-20]