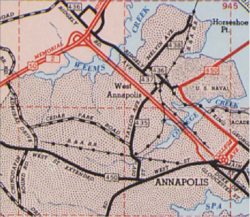 The history of Maryland Route 436 is inextricably tied with the other state routes in West Annapolis, the current Maryland Route 435 and former MD 437 and MD 438. All four routes were paved by 1933.[2] By 1946, MD 435 turned north on Annapolis Street from the north end of Taylor Avenue, then turned east on Severn Avenue (now Melvin Avenue), while MD 438 followed Revell Street and West Annapolis Avenue (both streets now Ridgely Avenue).[3] The 1950 Maryland state highway map implicitly suggests MD 436 was Annapolis Street between King George Street (then U.S. Route 50, now MD 450) and MD 435, while MD 437 was the block of Severn Avenue between MD 435 and MD 438.[4]

The entire route is in Annapolis in Anne Arundel County.