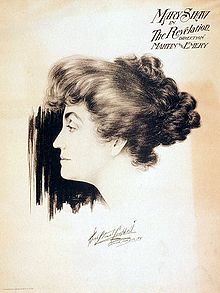 Shaw was involved in the women's movement since the early 1890s, and in 1892 she became a member of the Professional Women's League. She played many controversial roles in her career as an actress, and was involved in some of the most controversial plays of her time such as Henrik Ibsen's Ghosts and Hedda Gabler, George Bernard Shaw's(no relation) Mrs. Warren's Profession and many female suffrage plays.