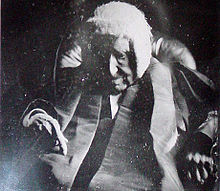 Daugerrotype of Routh in old age.

Routh was born at South Elmham, Suffolk, England. Educated at Queen's College and Magdalen College, Oxford, he was elected in 1775 to a fellowship at Magdalen College. On 28 April 1791, he became the President of Magdalen College, a post he held for the next 63 years until his death in 1854.[1] In 1810, he was presented with the valuable living of Tilehurst in Berkshire, where, it is recorded, he liked to spend his holidays when not in Oxford. At Tilehurst he married Eliza Agnes Blagrave, daughter of John Blagrave of Calcot Park.

Shrunken in size and deaf, Routh retained his eyesight, his good memory, and his other intellectual powers to the last, dying at Magdalen College.

He was the author of editions of the Euthydemus and Gorgias of Plato (1784), to which Karl Wilhelm Dindorf declared himself indebted for his first ideas of Greek criticism, and of Gilbert Burnet's History of his Own Time (2nd ed., 1833) and History of the Reign of King James the Second (1852). Routh was above all an authority on patristic literature, his Reliquiae Sacrae (2nd ed., 1846–48), a collection of the fragments of the Fathers of the 2nd and 3rd centuries, and Scriptorum ecclesiasticorum opuscula praecipua quaedam (2nd ed., 1840) being valuable contributions to ecclesiastical knowledge.

Many affectionate stories were told of him, but he is best known today for his response to J. W. Burgon, who asked him what he would say to a young don seeking advice: "You will find it a very good practice always to verify your references, sir!" This is also to be found in the short form, "Always verify your references", with and without the "sir". His last words when he collapsed taking a heavy volume from a high shelf in his library allegedly were: 'A worthless volume, sir! A worthless volume!'.