Martial music
This article is about music in military settings. For the industrial-related genre, see Martial industrial. 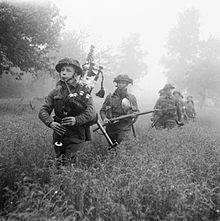 Martial music is a specific genre of music intended for use in military settings. Music has been employed in battle for centuries, sometimes to intimidate the enemy and other times to encourage combatants.

Joseph Jordania suggested that the initial function of human music (in the form of loud rhythmic singing, coupled with stomping and drumming on external objects) was to induce a specific altered state of consciousness, battle trance, where early hominids and humans were losing individuality and were acquiring collective identity. In this state they did not feel fear and pain, and were religiously dedicated to the interests of group to the point of sacrificing themselves[1]. Apart from special military bands and orchestras, military personnel also often uses listenign to loud rhythmic music in order to prepare themselves for the combat situations[2].

The notion of march music began to be borrowed from the Ottoman Empire in the 16th century. The Ottomans were believed to have introduced the first military bands in the thirteenth century, called mehter or Janissary bands. The music is characterized by an often shrill sound combining bass drums, horns (boru), bells, the triangle and cymbals (zil) and several other traditional instruments. The sound associated with the mehterân exercised an influence on European classical music, with such composers as Joseph Haydn, Wolfgang Amadeus Mozart, and Ludwig van Beethoven all writing compositions inspired by or designed to imitate the Ottoman music. See also: American march music.

Marching songs, typically with patriotic and sometimes nostalgic lyrics, are often sung by soldiers as they march. The songs invariably feature a rhythm timed to the cadence of the march. There are many examples from the American Civil War, such as "Marching Song of the First Arkansas"and "John Brown's Body". "P'tit quinquin was popular during the Franco Prussian War of 1870. The Boer War generated numerous marching songs among which "Marching to Pretoria" is well known. "It's a Long Way to Tipperary" was a marching song of World War I that became a popular hit. One of the most enduring marching songs from that war is probably the "Colonel Bogey March", which was popular in World War II as "Hitler Has Only Got One Ball"; the tune found later fame as part of the soundtrack for Bridge on the River Kwai. The "Dadao March" was a patriotic song sung in China during the Second Sino-Japanese War. "White Army, Black Baron" was written as a combat hymn for the Red Army of Russia in 1920, while "Erika" was sung by the German army during World War II. See also Songs of the Spanish Civil War.

The Vietnam war produced one hit song in 1966, "Ballad of the Green Berets" which has a martial rhythm. Curtis Mayfield's 1963 hit "Amen" also features a marching rhythm. In Vietnam and in particular in the Second Gulf War and in Afghanistan, recorded music (often featuring rap music) has been used by some soldiers as they travel, prepare for and engage in battle.[3] Performers such as Eminem have written songs with specific reference to the current wars including "Bagpipes From Baghdad". See also "Soundtrack to War". 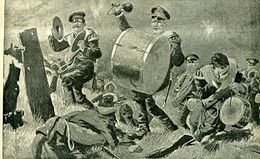 Historically, trumpets, drums, cymbals, bagpipes, and other loud musical instruments were used for clear communication in the noise and confusion of a battlefield. They are easily carried while the instrumentalist is in motion, i.e., marching. Modern additions include the upright glockenspiel and several brass instruments including trombone and sousaphone, which are often used by military bands.

Chinese troops used tàigǔ drums to motivate troops, to help set a marching pace, and to call out orders or announcements. For example, during a war between Qi and Lu in 684 BC, the effect of drum on soldier's morale is employed to change the result of a major battle. Fife-and-drum corps of Swiss mercenary foot soldiers also used drums. They used an early version of the snare drum carried over the player's right shoulder, suspended by a strap (typically played with one hand using traditional grip). It is to this instrument that the English word "drum" was first applied. Similarly, during the English Civil War rope-tension drums would be carried by junior officers as a means to relay commands from senior officers over the noise of battle. These were also hung over the shoulder of the drummer and typically played with two drum sticks. Different regiments and companies would have distinctive and unique drum beats which only they would recognize. See also Drum and bugle corps. 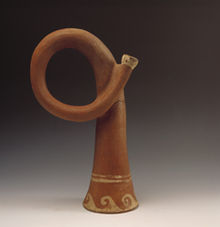 The earliest trumpets were signaling instruments used for military or religious purposes and the modern bugle continues this signaling tradition. See also: Fanfare. 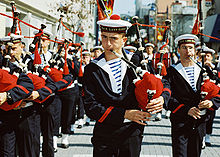 Textual evidence for the use of Scottish bagpipes in battle dates from in 1396, when records of the Battle of the North Inch of Perth reference "warpipes" being carried into battle, though it is believed that bagpipes were originally intended for peaceful music.[4] The Irish were also inspired by bagpipes, as witness in this 1586 account: "This sort of instrument is held among the Irish to be a whetstone for martial courage: for just as other soldiers are stirred by the sound of trumpets, so they are hotly stimulated to battle by the noise of this affair[5]. See also: Great Irish Warpipes.