Antero Pertti Elias[1] Niittymäki (Finnish pronunciation: [ˈantero ˈniːtːymæki]; born 18 June 1980[2]) is a Finnish professional ice hockey goaltender who is currently a member of the San Jose Sharks of the National Hockey League. He has previously played for the NHL's Philadelphia Flyers and Tampa Bay Lightning, as well as in the SM-liiga and the American Hockey League. At the 2006 Winter Olympics, while playing for Team Finland, he was voted the MVP of the entire tournament.

Niittymäki was the Philadelphia Flyers' 6th round pick (168th overall) in the 1998 NHL Entry Draft.[7] "I didn't even know I got drafted. I found out the next morning. I was really surprised," he said in an interview in November 2003.[8] Even if he had opted to go immediately to the United States to play hockey, compulsory military service kept Niittymäki in Finland until January 2001.[6]

From 2002 to 2005, Niittymäki played for the Flyers in the NHL and the Philadelphia Phantoms, the Flyers' American Hockey League affiliate. While in the AHL, Niittymäki made his name known. He was named the Sher-Wood AHL Player of the Week for the week ending on 23 November 2003 after posting a 0.41 GAA and .984 SP.[9] He played for PlanetUSA in the 2005 AHL All-Star Game.[10] The Phantoms organization gave out Antero Niittymäki bobbleheads on 27 February 2005[11] and Niittymäki figurines on 3 March 2006.[12]

Niittymäki scored a game-winning, empty net, overtime, shorthanded, unassisted goal on 11 April 2004 versus the Hershey Bears. The game ended 3–2, with Niittymäki recording 32 saves as well, which finished the 12–0 Philadelphia season sweep of the Bears.[13][14]

The Phantoms won the Calder Cup in 2005 after sweeping the Chicago Wolves. Niittymäki received the Jack A. Butterfield Trophy for being the MVP in the Calder Cup Playoffs. He had a 1.75 GAA and 15 wins, three of which were shutouts.[15] 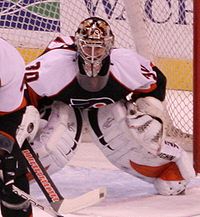 Niittymäki started his NHL career with the Flyers.

Niittymäki played 3 games for the Flyers in February 2004. He was allowed to play after Robert Esche was injured and Jeff Hackett was forced to retire because of vertigo. He won all three games, posting a 1.00 GAA, against the Washington Capitals, Atlanta Thrashers and New Jersey Devils. His starting stint ended after the Flyers acquired Sean Burke from the Phoenix Coyotes. Upon Esche's recovery, Burke took over the backup job and Niittymäki was sent back down to the Phantoms.[16][17][18][19]

Niittymäki started the 2005–06 season as the Flyers' backup goalie for Esche.[14] On 14 October 2005, Niittymäki let in a questionable goal immediately after a faceoff on the Pittsburgh Penguins' side of center ice. He was watching a JumboTron replay when Maxime Talbot softly shot at him and scored.[20]

While Esche was on the injury list, Niittymäki got the opportunity to start with Jamie Storr being his backup goalie. Niittymäki started seventeen consecutive games while Esche was unable to play. He recorded his first NHL shutout and assist/point during this time.[21][22][23] He was named the NHL Defensive Player of the week for the week ending on 8 January 2006.[24]

The 2006–07 NHL season revolved around injuries for Niittymäki. He suffered a torn labrum injury to his left hip during training camp. Doctors decided to try giving him cortisone shots to postpone surgery, which would have sidelined him for 6–8 weeks. The first shot allowed him to get back on the ice for the start of the season, but by late December he needed another shot. Despite this, he managed to take over the starting goaltender position from Esche. However, Philadelphia acquired Martin Biron and he was given the starting position for the rest of the year. Niittymäki finally had hip surgery in summer 2008.[25][26][27][28] He continued play backup goaltender for the Flyers for the next two seasons (07–08 and 08–09), setting a franchise record for most saves in a game in January 2008.[29][30]

The 2009 NHL offseason marked the first time in Niittymäki's NHL playing career that he was an unrestricted free agent.[31] After the Philadelphia Flyers acquired goaltenders Ray Emery and Brian Boucher,[32][33] Niittymäki signed with the Tampa Bay Lightning as a back-up goalie for Mike Smith,[24] however, he became the starting goaltender due to his performance on top of fellow goalie Mike Smith's injuries. 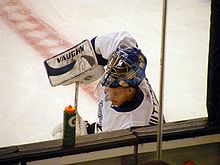 Niittymäki with the Lightning

Niittymäki started his 2009–2010 season with great success; after his first ten games, he led the league in both save percentage (.939) and goals against average (1.93).[34] Niittymäki won four straight games in February 2010,[14] something that had not occurred for Tampa Bay since two and a half years prior, when the team won five straight in the 2007–08 season (November).[35] On 25 March 2010 Niittymäki won his 20th game in the season[14] and the Tampa Bay Lightning's 500th franchise victory, while setting his second NHL franchise record for most saves in a game.[36]

Niittymäki extended his lifetime winning streak against the Atlanta Thrashers on 6 March 2010 to an impressive 17-0-0.[14][37] He has the longest streak of such amongst active goalies, alongside Detroit Red Wings goalie Chris Osgood, who is 17-0-0 lifetime against Tampa Bay.[38][39][40][41]

On the first day of free agency in summer 2010, Niittymäki replaced long time San Jose Sharks goaltender Evgeni Nabokov because of salary cap considerations.[42][43][44] Niittymäki played strongly at the beginning of the season, earning the Sharks Player of the Month award in October.[45] However, he sustained another lower body injury, resulting in him missing 17 games, during which Antti Niemi took over the starting goaltender job.[46][47]

Niittymäki was named to the Team Finland for the 2006 Winter Olympics after Kari Lehtonen and Miikka Kiprusoff had to pull out due to injuries.[23] Despite being a relative unknown with little top-level experience, he put in a stellar performance and was named the MVP of the tournament after posting 3 shutouts in 6 games, leading Finland to the silver medal.[24]

Niittymäki played for Finland in the 2006 IIHF World Championships until the last game of the qualifying round against Canada, in which he got injured and was replaced by the team's reserve goalie Fredrik Norrena.[48]

In the 2010 Winter Olympics Niittymäki was selected to the team as Finland's third goalie, behind Miikka Kiprusoff and Niklas Bäckström.[49] However he did not see any action during the tournament.[50]