Marstonia comalensis is a species of minute freshwater snail with a gill and an operculum, an aquatic gastropod mollusk or micromollusk in the family Hydrobiidae. It is found in south central Texas, USA.

Marstonia comalensis is large for this genus. It has an ovate-conic, openly umbilicate shell. The penis has a short filament and oblique, squarish lobe bearing a narrow gland along its distal edge.[3] It is well differentiated morphologically from other congeners that have similar shells and penes, and is also genetically divergent relative to those congeners that have been sequenced (mtCOI divergence 3.0–8.5%).[3]

This species has often been confused with Cincinnatia integra.[3]

In 1906, Henry Augustus Pilsbry and James Ferriss described this species under the name Amnicola comalensis based on six shells from Comal Creek and the Guadalupe River near New Braunfels, south-central Texas.[1][3] Pilsbry and Ferriss differentiated this species from Amnicola limosa (Say) and two nomina (Amnicola cincinnatiensis [Anthony], Amnicola peracuta Pilsbry & Walker) that are currently recognized as synonyms of Cincinnatia integra (Say) by its much smaller size and noted that it further differed from the latter by its less shouldered whorls.[3] The genus Amnicola was used at that time as “a catch-all for most American amnicoloid species that could not conveniently be placed elsewhere on the basis of their shells”.[3] Amnicola comalensis was not further treated taxonomically until Taylor (1975)[2] transferred it to Cincinnatia without comment in a bibliographic compilation;[3] this allocation was widely followed in the subsequent literature.[3] During the course of a revisionary study of Cincinnatia integra, Hershler and Thompson (1996)[4] examined several alcohol preserved collections of a snail that they identified as Amnicola comalensis and noted that it closely resembled species of Marstonia (which were then placed in Pyrgulopsis); Amnicola comalensis was subsequently transferred to Marstonia based on this unpublished work.[5][3] Hershler et al. (2003)[6] published a molecular phylogenetic analysis of the North American nymphophilines that included a specimen of Marstonia comalensis from Old Faithful Spring in Real County, Texas (ca. 180 km from the type locality), which was depicted as nested within the Marstonia clade.[3] This was the only published record for Marstonia comalensis subsequent to its original description.[3] Hershler & Liu (2011)[3] redescribed Marstonia comalensis based on study of a large series of dry shell and alcohol-preserved material, most of which was collected by malacologists J. J. Landye and D. W. Taylor from 1971-1993, and provided anatomical evidence supporting its current generic allocation.[3] 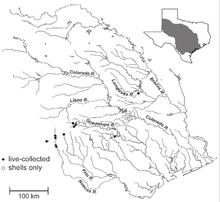 The type locality is Comal Creek, near New Braunfels, Comal County, Texas.[3] The original collections of Marstonia comalensis are worn shells having the appearance of drift material.[3] It is possible that Marstonia comalensis became extinct at Comal Springs when this water body temporarily dried in 1964; it is also possible that the shells of this species which have been found at this site were washed downflow from extant populations in the headwaters of the Guadalupe River.[3]

Records published by Hershler & Liu (2011)[3] considerably expanded the geographic range of Marstinia comalensis, which lives in springs and fluvial habitats spread among four river basins in south-central Texas.[3] Almost all of these localities are on the Edwards Plateau.[3] Records indicate that Marstonia comalensis was historically distributed in the upper portions of the Brazos River, Colorado River (Texas), Guadalupe River (Texas) and Nueces River basins, south-central Texas.[3] The species has been live collected at only 12 localities and only two of these have been re-visited since 1993.[3]

Hershler & Liu (2011)[3] also analyzed previously published molecular data to evaluate the genetic divergence and phylogenetic relationships of Marstonia comalensis, whose geographic range is broadly disjunct relative to other members of the genus.[3]

The operculum is thin, amber, narrowly ovate, multispiral with eccentric nucleus.[3] The last 0.25 whorl is sometimes frilled on outer side; inner side having well developed rim near outer edge.[3] The attachment scar border is sometimes weakly thickened near the nucleus.[3] 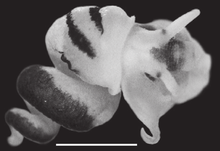 The cephalic tentacles are pale, except for black eyespots.[3] Snout is brown, distal lips are pale and foot is pale.[3] Pallial roof has black pigment bands along edges of ctenidium and dorsal edge of genital duct; visceral coil pale except for black pigment on testis.[3] Ctenidium is positioned a little in front of pericardium.[3] There are 24-25 ctenidial filaments, that are broadly triangular with lateral surfaces ridged.[3] Osphradium is narrow, positioned slightly posterior to middle of ctenidium.[3]

Radula has about 36 well-formed rows of teeth.[3] Central teeth are about 38 μm wide with convex cutting edge.[3] There are 3-8 lateral cusps. Central cusp are pointed or hoe-shaped, parallel-sided proximally or tapering throughout.[3] There are 1-3 small basal cusps. Basal tongue is U- or V-shaped, about as long as lateral margins. Lateral tooth face is rectangular.[3] Central cusp is pointed or hoe-shaped.[3] There are 2-5 lateral cusps (inner) and 3-7 (outer).[3] Outer wing is broad, flexed, with about 140% length of cutting edge.[3] Basal tongue weakly is developed. Inner and outer marginal teeth both have 14-21 cusps and basally positioned rectangular wing.[3] 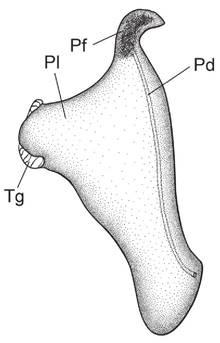 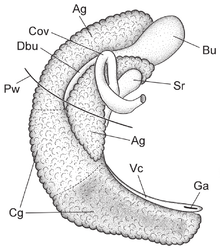 Marstonia comalensis has a closely similar shell and penis to some of its congeners, but can be differentiated from them in these ways:

It can be distinguished from Marstonia gaddisorum by its less convex shell whorls, distinctive pallial roof pigmentation, larger number of cusps on the inner side of the lateral teeth and on the outer marginal teeth, larger penial lobe, narrower terminal gland, and smaller overlap of the bursa copulatrix by the albumen gland.[3]

Marstonia comalensis lives in cold water springs near their sources, and slack water riverine habitats.[3] It has been most commonly found on mud, aquatic vegetation and dead leaves.[3]

This species was included in a recent federal listing petition (2007) based on its critically imperiled (G1) NatureServe (2009) ranking, but found not to warrant listing owing to insufficient information.[3] The data by Hershler & Liu (2011)[3] suggest that the conservation status of this snail needs to be re-assessed.[3]

This article incorporates CC-BY-3.0 text from the reference[3]