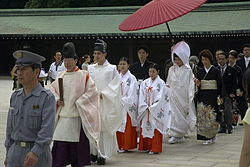 Japanese wedding customs fall into two categories: traditional Shinto ceremonies, and modern Western-style weddings. In either case, the couple must first be legally married by filing for marriage at their local government office, and the official documentation must be produced in order for the ceremony to be held. Traditionally, marriages were categorized into two types according to the method of finding a partner—miai, meaning arranged or resulting from an arranged introduction, and ren'ai, in which the principals met and decided to marry on their own—although the distinction has grown less meaningful over postwar decades as the proporion of miai matches has dwindled.[1] The Japanese bride-to-be may be painted pure white from head to toe, visibly declaring her maiden status to the gods. Two choices of headgear exist. One, the watabōshi, is a white hood; the other, called the tsunokakushi, serves to hide the bride's 'horns of jealousy.' It also symbolizes the bride's intention to become a gentle and obedient wife.

Traditional Japanese wedding customs (shinzen shiki) involve an elaborate ceremony held at a Shinto shrine. Japanese weddings are being increasingly extravagant with all the elaborate details placed into thought. However, in some cases, younger generations choose to abandon the formal ways by having a "no host party" for a wedding.[2] In this situation, the guests include mainly of the couple's friends who pay an attendance fee.

Couples are officially married once they have successfully submitted the required documents to the city hall registrar to change their status in their family registries. No ceremony of any kind is required under Japanese law.[3][4]

Christian-style wedding ceremonies are currently very popular in Japan.[5] These ceremonies are modeled on a traditional or stereotypical chapel wedding.

In recent years, the Christian-style wedding (often called a "Western Style Wedding") has become the choice of most couples in Japan.[6] An industry has sprung up, dedicated to providing couples with a ceremony modeled after church rituals. Japanese Christian-style weddings are generally held in a chapel, either in a simple or elaborate ceremony, often at a dedicated wedding chapel within a hotel.

Although less than 3 percent of Japanese consider themselves Christian,[8] there is no perceived contradiction in participating in a Christian ritual. Similarly, Japanese people usually arrange Buddhist funerals even though they are not particularly interested in Buddhism. Most couples probably choose their wedding style, not for any religious reason, but rather as a fashion statement. This is similar to the approach taken by secular couples in the West.

Over the past few decades Christian-style wedding ceremonies have become widespread, to the point that currently they are the standard form. The adoption of Christian-style weddings dates back to two events in the 1980s. The first pivotal moment was the wedding of Lady Diana Spencer to Prince Charles, and the second—among the Japanese—was the televised wedding of the pop star Momoe Yamaguchi.

In 2001 it was estimated that of the 800,000 weddings in Japan, 60 to 70 percent of couples opted for a Christian-style wedding. The popularity of these chapel weddings has only increased since then.[citation needed]

Flow of the ceremony

Before the ceremony, there is a rehearsal. Often during this rehearsal, the bride's mother lowers the veil for her daughter, signifying the last act that a mother can do for her daughter, before "giving her away". The father of the bride, much like in Western ceremonies, walks the bride down the aisle to her awaiting groom.

After the rehearsal comes the procession. The wedding celebrant will often wear a wedding cross, or cana, a cross with two interlocking wedding rings attached, which symbolize a couple's commitment to sharing a life together in the bonds of holy matrimony. The wedding celebrant gives a brief welcome and an introductory speech before announcing the bride's entrance. The procession ends with the groom bowing to the bride's father. The father bows in return.

The service then starts. The service is given either in Japanese, English or quite often, a mix of both. It follows Protestant ceremony, relaxed and not overtly religious. Typically part of 1 Corinthians 13 is read from the Bible. After the reading, there is a prayer and a short message, explaining the sanctity of the wedding vows (seiyaku). The bride and groom share their vows and exchange rings. The chapel register is signed and the new couple is announced. This is often followed by the traditional wedding kiss. The service can conclude with another hymn and a benediction.

There is a further popular wedding style called 'non-religious' or 'civil', which again is modelled on the West but has no religious connotations. The officiant is a Master of Ceremonies and the wedding often takes place in a banquet room prior to or during the reception party, with guests seated at tables.

Whether Christian-style or Shinto style, 'religious' or 'non-religious', the wedding ceremonies themselves have no legal standing. Formerly, when it was performed according to Shinto ritual, the wedding allowed the union to be blessed by a priest, which gave official and legal recognition to the marriage. Today, weddings still serve the function of having the marriage formally celebrated by loved ones, but although Christian or shinto rites are often included, many of those officiating have no ordination. Similarly, MCs at 'civil' weddings need no formal qualification.[5]

With the two types of ceremonies, Shinto and Western, available it was bound for the two to be combined into what is called a contemporary Japanese wedding. Contemporary Japanese weddings are celebrated in many ways. On the beginning of the wedding day, the participants are to get ready at the parlor's beauty shop. The responsibility of the beauty shop is to dress the bride, the groom, and the other participants in the formal Japanese attire. Dressing the bride is an important task because the bride is to change into several outfits throughout her wedding day. Due to the complexity of the design, dressing a bride can be difficult and time consuming and for this reason the bride must be the first person to arrive two hours prior to the wedding ceremony. The bride's attire consists of an extravagant kimono, heavy make-up, a wig, and a head covering. An hour prior to the wedding ceremony, the guests and the groom should start to arrive.[9]

When everyone is dressed in their formal attire, the bride and the groom are to separate from each other and meet their close relatives in a waiting room. The relatives present will appear in the family photo and will also attend the religious ceremony. During this gathering, the kaizoe (assistant) will inform the participants of what will take place and what they should do during the day since they are not familiar with the ceremony.[9]

After the lengthy photo session, the bride, the groom, and others are brought to the Shinto shrine. Nowadays, the Shinto shrine may be conveniently located inside a hotel where all the activities will take place. A Shinto priest conducts the ceremony. In the ceremony, the bride and the groom are purified. However, the ceremony's important event occurs when the bride and the groom exchange nuptial cups of sake also known as san-san-ku-do. With the addition of Western tradition, the exchange of rings and weddings vows also take place. Those guests who did not attend the religious ceremony are able to view the ceremony on video screens located in the lobby.[9]

Throughout the reception, the bride shall receive the guests' utmost attention because she changes two to three times for the dramatic entrances. With all the dramatic entrances, the groom will join the bride. For example, the first entrance includes the bride, the groom, and the nakodo couple. Nakodo means a "matchmaker" or a "go-between", which is usually referred to the husband. The nakodo couple plays such an important role that their names appear on the announcement of the wedding. The purpose of the nakodo is to symbolize a stable marriage. As the two couples appear a special effect of a cloud of white smoke will appear to surround them. Simultaneously, the hall lights are dimmed and the stage lighting will turn to the color of rose-pink. Pictures are to be taken during the dramatic entrances of the bride and the groom. After the photographs have been taken, they will be led back to their table.[9]

At this point the Master of Ceremonies will congratulate the newlyweds and their family. He/she will then introduce the nakodo, who will start the opening speeches and more speeches will follow. Being that the reception is highly structured the speakers will have the idea of being formal and concise in mind. With all the speeches finished, the bride and the groom will perform the Western-style traditions, which include the following: (1) the cake cutting ceremony and (2) the newlyweds' first dance as husband and wife.[9]

The next part of the reception is the toast, or kanpai, which simplifies the mood of the reception where the guests can start to relax, eat, and drink. What follows the toast are the short congratulatory speeches made by relatives, friends, and colleagues. During this time, the bride has gone to change into her first costume and continues throughout the reception. However, the groom will also have a chance to change into his costume, which is the Western tuxedo. By the end of the night, both the bride and the groom have changed from their traditional Japanese attire to their Western-style attire.[9]

After their last change of costumes, the newlyweds will perform the candle service. Both will have a long, unlit candle, which will be lit from the table where their parents are seated. Next, the couple will walk around the room in a circle and light the candles placed on their guests' table. Once all the candles are lit, the newlyweds will return to their table where they will light what is called the Memorial Candle.[9]

By the time the candle service is done the two hours restriction will soon expire. The remaining few minutes includes short speeches, songs, dances, etc. As the reception ends a flower presentation ceremony will take place, which is where the newlyweds will present their parents with a gift of flowers to display appreciation for their parents raising them to the people they are today. At this point, the reception has ended with quick flashes and farewells.