Antoine Jean Galiot Mandat (7 May 1731, in the outskirts of Paris – 10 August 1792, on the steps of the Hôtel de Ville, Paris), known as the Marquis de Mandat, was a much-admired French nobleman, general and politician. A knight and lord of Berny-en-Santerre and Les Pins[1] in the Vendômois, he became a colonel in the Gardes-Françaises, then succeeded La Fayette as commander of the National Guard in 1792. He was assassinated by insurgents (possibly Jean Antoine Rossignol) in the events of the 10 August during the French Revolution.

The family had formerly been a noble family in the Limousin, attested since 1339.[2] Galiot Mandat, lord of Aigrefoin, was received as king's secretary for provisions on 31 October 1572 on the resignation of Louis Guybert and his father.[3] Its descendents were in two branches, of which the elder died out when Antoine-Galiot Mandat, conseiller to the parlement de Metz by letters dated May 1640, received as conseiller to the parlement de Paris on 14 July 1649, died unmarried and without issue. The other branch, known as the barons of Nully (in Champagne), has continued until our days and distinguish itself for many generations by its devotion to the monarchy.[4]

Antoine Galiot Mandat was the son of Galiot V Mandat (1683–1755), Maître des Requêtes ordinaire de l'Hôtel du Roi, received to the Grand Conseil on 6 March 1720. His mother, Marie Anne Cherouvrier des Grassières, was sister-in-law to marquis Louis-Urbain-Aubert de Tourny, Intendant of the Généralité de Limoges. The king confirmed his father in the land and seigneurie of Les Pins, in the north east of Touraine on 13 June 1727. 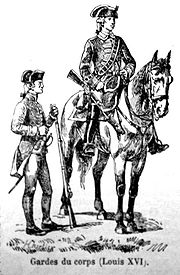 Marquis Galiot Mandat de Grancey was a former officer in the Maison militaire du roi de France, like many members of his family.

He was baptised at Église Saint-Sulpice. He served in the First Company of Musketeers of the Garde ordinaire du Roi from 26 November 1753 to 2 March 1755, as enseigne à drapeau to the regiment of the Gardes-Françaises (1755–57), then as Enseigne à Pique (from 5 June 1757) and sous-lieutenant (23 December 1759) in the same regiment.

In 1789, he left the Gardes-Françaises, at the rank of captain[5] or colonel retiré du service, according to La Chenaye-Desbois.[6] He was also a knight of the ordre royal et militaire de Saint-Louis.[7] He tried in vain to become a gentleman of the court, but had to renounce his place despite his annual rent of 180,000 francs.[8]

In the pre-revolutionary period Marquis Antoine-Jean-Galiot de Mandat was loved by everyone in Les Pins, in the north east of Touraine, even by those who would soon lead Revolutionary efforts in the area. He is known in history as "a noble who embraced the revolutionary party"[9] and thus his behaviour corresponded to that of his neighbours and peasants. 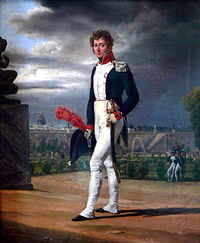 An officer of the National Guard in the Tuileries garden.

In 1789 Antoine Galliot Mandat was aged 58. He was head of the 4th Legion of the National Guard.[10] He lived at rue Chapon, n° 3. Brave and loyal to his oath to defend the inviolability of the head of state and the head of state's house,[11] he supported the new ideas but remained highly devoted to Louis XVI. He inspired great confidence in the royal court (in the words of Adolphe Thiers "to the cause by his energy and his lights". His remarks leave no doubt as to his fidelity to the king:

His ideas favouring a constitutional monarchy arose from those close to the king. Madame Campan, whose father was a friend of Mandat, answered Louis XVI's question "Who is this Mandat who at this moment commands the National Guard?" by saying "Sire, he is the most faithful of your subjects, but with much loyalty and very little intelligence. He is in the interests of the Constitution.".[12] The National Guard's attitude in 1792 was less loyal than Mandat's, though it varied from battalion to battalion:

Antoine Galiot Mandat "always offered his head as a guarantee of the king's good intentions", but after the flight to Varennes and due to revolutionary propaganda he could no longer succeed in convincing all the national guards. The battalions of the Saint-Antoine and Saint-Marceau faubourgs were openly hostile to him from 1789 onwards and in the other battalions the poorest guards were favourable to Jacobin ideas. 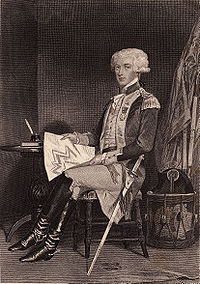 He replaced La Fayette shortly before 10 August 1792 as commander in chief of the National Guard. La Fayette had been impeached as a victim of false rumours as to his conduct and impeached. This proposition, backed by Brissot and heatedly fought by Vincent-Marie Viénot de Vaublanc and Quatremère de Quincy, was repulsed by a majority of 406 votes against 224.

Because of the vote, the deputies who had provoked him were assaulted, beaten and threatened with death after the session had ended, until the National Guard came to their rescue. According to Hippolyte Taine: As to de Vaublanc, the main defender of La Fayette, he was attacked three times, had taken the precaution not to go home but angry mobs showed up at his house, shouting that "four eighty people will perish at their hands, and he would be first." Twelve men who had climbed to into his apartment and rummaged around also ransacked nearby houses, and, unable to catch himself, looked for his family; they warned that if he returned to his home, he would be killed.[14] La Fayette tendered his resignation. The assault on the Tuileries was set for August 10. The people of Marseille were given gunpowder and bullets by the municipality – a fact known to the court.

Mandat, whose side was outnumbered, intended to defend the courts by posting some Swiss and grenadiers. He even amassed the National Guard in the garden and placed cannons on Pont Neuf and St. John's Arcade, behind the Hotel de Ville, to stop the rioters' descent from the suburbs. 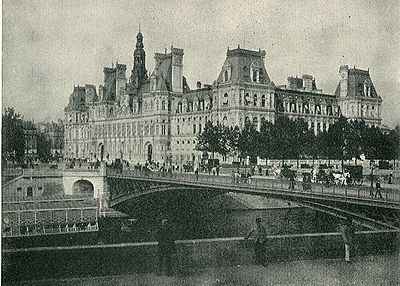 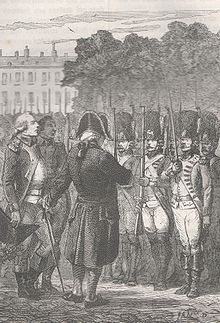 Louis XVI reviewing the troops defending the palais des Tuileries with Augustin-Joseph de Mailly, marshal of France, before the battles of 10 August.

The results of Mandat's death 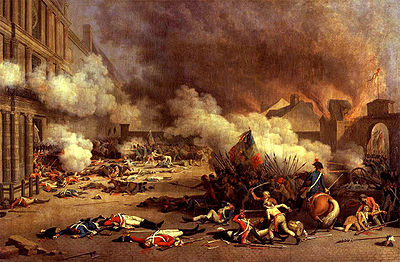 During the final assault, Galiot Mandat de Grancey had already been assassinated and so the defence became disorganised

The sumptuous hôtel du Président Duret, 67 rue de Lille, belonged to him in 1792 and remained in his son's ownership until 1797 despite Galiot Mandat's assassination.