Marquisate of the Valley of Oaxaca

Marquisate of the Valley of Oaxaca

The Marquisate of the Valley of Oaxaca (Spanish: Marquesado del Valle de Oaxaca) is a hereditary marquisal title in the Spanish nobility and a former seignorial estate in New Spain. It was granted to Hernán Cortés, conquistador who led the conquest of the Aztec Empire, by Charles V, Holy Roman Emperor in 1529. Despite its name, the marquisate covered a much larger area than the Valley of Oaxaca, comprising a vast stretch of land in the present-day Mexican states of Oaxaca, Morelos, Veracruz, Michoacán and Mexico.

The title was held by Cortés' descendants through 1814, when the Constitución de Apatzingan abolished hereditary titles in Mexico.[1] After the 12th Marquis died in 1859, his successors as Duke of Monteleone appear to have not renewed this title until 1916, when the 16th Duke of Monteleone became the 13th Marquis of the valley of Oaxaca. The title again became dormant on his death in 1938. A member of a cadet branch of the family (descendant of the 7th Marquise) asked for the resumption of the title in 1973, and it was granted to him. The descendants of the 13th Marquis, a family established in Italy, has claimed the title, but has not taken any legal action in Spain against the legal holder. Given the multiple claims, it is worth noting that the 1535 Mayorazgo guaranteeing the continuation of the Marquisate was conditioned on (among others) loyalty to the King of Spain.

After the fall of Tenochtitlan, with the capture of the last Aztec Tlatoani, Cuauhtémoc, on August 13, 1521, the Aztec Empire disappeared, becoming part of the Spanish Empire. The succes brought legal status for Cortés, whose position had been contested during the conquest.[2][3] On October 15, 1522, a Royal Cedula was isuued, appointing him Governor and Captain General of New Spain. Cortés personally governed the newly conquested territories until 1524, when he left for Honduras, heading an expedition against the rebel Cristóbal de Olid, who had declared his independence from Spain and claimed Honduras was his own. 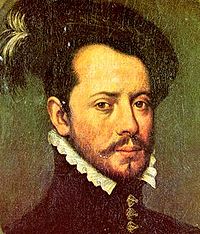 Hernán Cortés, conquistador of New Spain, 1st Marquis of the Valley of Oaxaca

At his arrival at Mexico City in 1526, after having defeated Olid, Cortés found that his enemies Bishop Fonseca, President of the Council of Indies, and Diego Velázquez de Cuéllar, Governor of Cuba, had persuaded the King to initiate a juicio de residencia (judgement of residence) against him. The chosen licenciate was Luis Ponce de León, who supended Cortés from his office of governor on July 16, 1526, and took over the government himself. Ponce de León died shortly after his arrival, and was replaced by Marcos de Aguilar, who also died shortly after taking office. Cortés, who was accused by his oppontents of having poisoned both of them,[3] decided to return to Spain to appeal to the justice of the King.

In 1528, Cortés attained Castile, where he presented himself with great splendor before Charles V's court, responding forthrightly to the accusations of his enemies. Cortés gained the royal favour, and was created Marquis of the Valley of Oaxaca, being formally confirmed in his land holdings and vassals. The title was bestowed upon him by a Royal Cedula issued on July 6, 1529. He was also honoured with the knighthood of the Order of Santiago and the honorary charge of Captain General of New Spain and of the Coast of the Southern Sea,[4] but wasn't reinstated the governorship of New Spain as he desired and never held any office with political power again.[5]

On July 27, 1529, a new Royal Cedula was issued, permitting Cortés to establish a majorat annexed to the title.[6] The institution of the majorat, which took place on January 9, 1535,[6] ensured the permanence of the Marquisate, as it entailed most of Cortés' estates, urban properties and vassals, rendering them inheritable along with the marquisal dignity in the family. The majorat also laid down the succession to the title, which is by male-preference primogeniture, i.e. female are allowed to succeed if she has no living brothers and no deceased brothers who left surviving legitimate descendants. It was also precised that the Marquise or Marquise had to be a Roman Catholic, loyal to the King, and bear the name and arms of Cortés.[6]

Cortés' estate was one of the very few seignorial hereditary domains created in the Indies, along with the short-living Dukedom of Veragua and Marquisate of Jamaica; the Dukedom of Atrisco, the Marquisate of Santiago de Oropesa and the Lordship of Maní.[7] The Spanish crown preferred to reward conquistadors with the encomienda system, extensions of land whose indigenous population could be forced into slavery in exchange of room, board and religious instruction.[8] The encomiendas could only be inherited up to two generations, and the encomenderos had no political or judiciary power in their lands, depending on the pertinent Royal Audience and Captaincy General or Intendance.[8] Far from it, the Marquis of the Valley of Oaxaca had full civil and criminal jurisdiction over his 23.000 vassals,[9] and could name justice and administrative officials.[10] 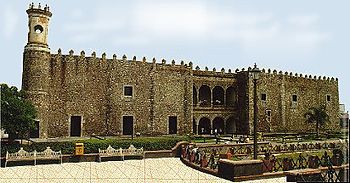 Palace of Cortés, Cuernavaca. Main seat of government of the Marquisate of the Valley of Oaxaca, and residence of the 1st, 2nd and 4th Marquises.

This last Corregimiento included until 1560 the port of Tehuantepec, when King Philip II issued a Royal Cedula, dated December 16, which removed Tehuantepec from the marquisal estate, but specified that the Marquis should receive in exchange the equivalence of the tributes in gold that the town produced for the Royal Treasury.[13] The Royal Audience of Mexico, on November 23, 1563, fixed a perpetual annual reward of 1,527 pesos of gold and 3,442 fanegas of maize paid by the villages of Tenango del Valle and Chimalhuacán.[13]

The Alcaldia Mayor of the four towns of the Marquisate (Santa María de Oaxaca, Cuilapan, Etla and Santa Ana Tlapacoyan), of 1,500 km2,[12] included 34 villages, 2 haciendas and a sugar ingenio. Notwithstanding being surrounded by lands of this Alcaldía, the city of Antequera (today Oaxaca de Juárez) was patrimony of the Crown.[11] The Alcaldía Mayor of Cuernavaca spanned the former Corregimientos of Acapixtla and Oaxtepec, covering an area of 4,100 km2. It included the city of Cuernavaca, head of the Marquisate; 80 villages, 8 haciendas and 3 sugar ingenios, situated in Tlaltenango (the first one in New Spain), Amatitlán and Atlacomulco.[12] The Alcaldía Mayor of Tuxtla and Cotaxtla, headed by the town of Santiago Tuxtla, was composed of 51 villages.

Up to 1567, the Marquis assigned the general supervision of the Estate affairs to the High Steward (Mayordomo Mayor), an official directly bellow him whose work consisted of routine collection and disbursment of funds and materials, as well as the conduct of lawsuits.[14] In that year, the viceregal authorities discovered a conspirancy led by the 2nd Marquis and his brother Martín Cortés the Mestizo, planning to proclaim the former King of New Spain, supported by the conquistadors, who were unhappy with new laws that impeded the inheritance of encomiendas.[15] The King ordered the sequestration of the Marquisate, which ment the Crown seized control of the Estate and withdrew all its incomes; the leaders being expelled from New Spain and forbidden to return.

Although the sequestration was lifted in 1593, the Marquises lost direct control of the administration of the Estate, as they had to retain the structure trough which the Crown had worked, which relinquished the governative autonomy they use to have.[14] From then, the Marquisate had a fixed bureaucracy: The Governor and Privative Judge of the Estate (Gobernador y Juez Privativo), the Estate Controller (Contador), the Estate Lawyer (Abogado de Cámara), the Estate Solicitor (Procurador), the Estate Bailiff (Agente solicitador), the Estate Executioner (Ministro ejecutor), the Administrator of houses and ground rents and the Interpreter of the Náhuatl.[10] These major officials met together as a group, called the Junta, to discuss Estate affairs. Also, there was an office in Madrid, the General Direction, so that the decisions could be taken jointly with the agents of the Marquis.[14]

From the Cortés to the Pignatellis

Martín, the 2nd Marquis, obtained royal pardon in 1574, returning from his exile in Oran and recovering part of his sequestered lands in Mexico. However, he could not go back to New Spain and still had to pay a fine of 50,000 ducats and lend 100,000 more to the Crown.[16] He died in Madrid in 1589 and was succeeded in the title by his eldest son, Don Hernando, who was reinstated the rest of his Estate in 1593, with the help of his brother-in-law, the Count of Chinchón, close advisor to the King.[16] The 3rd Marquis left no legitimate issue, so the title passed on his death to his brother, Don Pedro. This Marquis was allowed to settle in Mexico, where he personally took up the running of the Estate, which had been controlled by administrators since 1567.

The 4th Marquis also died without surviving descendants, so the Marquisate was inherited by his niece, Estafanía Carrillo de Mendoza y Cortés, married to the Sicilian Duke of Terranova. Estefanía was the eldest daughter of Juana Cortés, sister of the 3rd and the 4th Marquises, and her husband the Count of Priego. Upon the inheritance of the title, in compliance with the majorat, the familiy adopted the name Aragona Tagliavia Cortés, although commonly referred to as Tagliavia d'Aragona.[17] This marriage produced a single child, Giovanna, one of the richest heiresses of her time,[18] who married Ettore Pignatelli, 5th Duke of Monteleone, giving birth to a dynasty that assembled the immense wealth of the Aragonas, the Tagliavias, the Pignatellis and the Cortés, their titles and their fiefs, among which the Mexican marquisate was the crown jewel. Upon marriage, the groom assumed the name Aragona Pignatelli Cortés for him and all his descendants, who however where generally known as Pignatelli d'Aragona.[17]

The titular heir apparent is Prince Diego Pignatelli d'Aragona (b. 1958)