Sebastião José de Carvalho e Melo, 1st Count of Oeiras, 1st Marquess of Pombal ((Marquês de Pombal, Portuguese pronunciation: [mɐɾˈkeʃ dɨ ˈpõbaɫ]; 13 May 1699–8 May 1782) was an 18th century Portuguese statesman. He was Minister of the Kingdom (the equivalent to a today's prime minister) in the government of Joseph I of Portugal from 1750 to 1777. Undoubtedly the most prominent minister in the government, he is considered today to have been the de facto head of government. Pombal is notable for his swift and competent leadership in the aftermath of the 1755 Lisbon earthquake. He implemented sweeping economic policies in Portugal to regulate commercial activity and standardize quality throughout the country. Pombal was instrumental in weakening the grip of the Inquisition.[1] The term Pombaline is used to describe not only his tenure, but also the architectural style which formed after the great earthquake.

Pombal introduced many fundamental administrative, educational, economic, and ecclesiastical reforms justified in the name of "reason" and instrumental in advancing secularization. However, historians argue that Pombal’s "enlightenment," while far-reaching, was primarily a mechanism for enhancing autocracy at the expense of individual liberty and especially an apparatus for crushing opposition, suppressing criticism, and furthering colonial economic exploitation as well as intensifying print censorship and consolidating personal control and profit.[2]

Sebastião José de Carvalho e Melo (Portuguese pronunciation: [sɨbɐʃtiˈɐ̃w̃ ʒuˈzɛ dɨ kɐɾˈvaʎu i ˈmɛlu]) was born in Lisbon, the son of Manuel de Carvalho e Ataíde, a country squire with properties in the Leiria region, and of his wife Teresa Luísa de Mendonça e Melo. During his youth he studied at the University of Coimbra and then served briefly in the army. He then moved to Lisbon and eloped with Teresa de Mendonça e Almada (1689–1737), the niece of the Count of Arcos Sebastião. The marriage was a turbulent one, as his wife had married him against her family's wishes. The in-laws made life unbearable for the young couple; the newlyweds eventually moved to Melo's properties near Pombal.

In 1738, Melo received his first public appointment as the Portuguese ambassador to Great Britain. In 1745, he served as the Portuguese ambassador to Austria. The Queen consort of Portugal, Archduchess Mary Anne Josepha of Austria (1683–1754), was fond of him; after his first wife died she arranged for him to marry the daughter of the Austrian Field Marshal Leopold Josef, Count von Daun. King John, however, was not pleased and recalled him in 1749. John V died the following year and his son Joseph I of Portugal was crowned. Joseph I was fond of Melo; with the Queen Mother's approval he appointed him as Minister of Foreign Affairs. As the King's confidence in him increased, the King entrusted him with more control of the state.

By 1755, the King appointed him Prime Minister. Impressed by English economic success which he had witnessed as ambassador, he successfully implemented similar economic policies in Portugal. He abolished slavery in Portugal and the Portuguese colonies in India, reorganized the army and the navy, abolished the Autos-de-fé and ended the Limpeza de Sangue (cleanliness of blood) civil statutes and their discrimination against New Christians, the Jews that had converted to Christianity, and their descendents regardless of genealogical distance, in order to escape the Portuguese Inquisition.

The Pombaline Reforms were a series of reforms with the goal of making Portugal an economically self-sufficient and commercially strong nation, by means of expanding Brazilian territory, streamlining the administration of colonial Brazil, and fiscal and economic reforms both in the Colony and in Portugal.[citation needed]

During the Age of Enlightenment Portugal was considered small and lagging behind. It was a country of three million people in 1750; 200,000 people lived in the nation's 538 monasteries.[citation needed] The economy of Portugal before the reforms was a relatively stable one, though it had become dependent on colonial Brazil for much of its economic support, and England for much of its manufacturing support, based on the Methuen Treaty of 1703. Even exports from Portugal went mostly through expatriate merchants like the English port wine shippers and French businessmen like Jácome Ratton, whose Memoirs are scathing about the efficiency of his Portuguese counterparts. The need to grow a manufacturing sector in Portugal was made more imperative by the excessive spending of the Portuguese crown, the 1755 Lisbon Earthquake, the expenditures on wars with Spain for Brazilian territory, and the exhaustion of gold mines and diamond mines in Brazil.[3]

His greatest reforms were, however, economic and financial, with the creation of several companies and guilds to regulate every commercial activity. He created the Douro Wine Company which demarcated the Douro wine region for production of Port, to ensure the wine's quality; his was the first attempt to control wine quality and production in Europe. He ruled with a heavy hand, imposing strict laws upon all classes of Portuguese society, from the high nobility to the poorest working class, and via his widespread review of the country's tax system. These reforms gained him enemies in the upper classes, especially among the high nobility, who despised him as a social upstart.

Further important reforms were carried out in education by Melo: he expelled the Jesuits in 1759, created the basis for secular public primary and secondary schools, introduced vocational training, created hundreds of new teaching posts, added departments of mathematics and natural sciences to the University of Coimbra, and introduced new taxes to pay for these reforms.

Having lived in Vienna and London, the latter city in particular being a major centre of the Enlightenment, Melo increasingly believed that the Society of Jesus, also known as the "Jesuits", with their grip on science and education, were an inherent drag on an independent, Portuguese-style iluminismo. He was especially familiar with the anti-Jesuit tradition of Britain, and in Vienna he had made friends with Gerhard van Swieten, a confidant of Maria Theresa of Austria and a staunch adversary of the Austrian Jesuits' influence. As prime minister Melo engaged the Jesuits in a propaganda war, which was watched closely by the rest of Europe, and he launched a number of conspiracy theories regarding the order's desire for power. During the Távora affair (see below) he accused the Society of Jesus of treason and attempted regicide, a major public relations catastrophe for the order, in the age of absolutism.

The Jesuits and their apologists emphasized the order's role in trying to protect native Americans in the Portuguese and Spanish colonies, and the fact that the limitations placed upon the order resulted in the so-called Guarani War in which the Guarani tribesmen were decimated by Spanish and Portuguese troops. However, at the time such arguments counted for far less than charges connected with the Jesuits' alleged activities in Europe.

Because the Jesuits were the chief inquisitors in Portugal in the 18th century, Pombal’s efforts against their order was instrumental in weakening the grip of the Inquisition.[4] Pombal was thus an important precursor for the suppression of the Jesuits throughout Europe and its colonies, which culminated in 1773, when European absolutists forced Pope Clement XIV to issue a bull empowering them to suppress the order in their domains.

Disaster fell upon Portugal on the morning of November 1, 1755, when Lisbon was struck by a violent earthquake with an estimated magnitude of 9 on the Richter scale. The city was razed by the earthquake and ensuing tsunami and fires. Melo survived by a stroke of luck, and then immediately embarked on rebuilding the city, with his famous quote: What now? We bury the dead and heal the living. Despite the calamity, Lisbon suffered no epidemics, and within less than a year it was already being rebuilt. The new central area of Lisbon was designed to resist subsequent earthquakes. Architectural models were built for tests, and the effects of an earthquake were simulated by marching troops around the models. The buildings and major squares of the Pombaline Downtown of Lisbon are one of Lisbon's main tourist attractions: they are the world's first earthquake-proof buildings. Melo made also an important contribution to the study of seismology, by designing a survey that was sent to every parish in the country. The questionnaire asked whether dogs or other animals behaved strangely prior to the earthquake, whether there was a noticeable difference in the rise or fall of the water level in wells, and how many buildings had been destroyed and what kind of destruction had occurred. The answers have allowed modern Portuguese scientists to reconstruct the event with precision.

Following the earthquake, Joseph I gave his Prime Minister even more authority, and Melo became a powerful, progressive dictator. As his power grew, his enemies increased in number, and bitter disputes with the high nobility became frequent. In 1758, Joseph I was wounded in an attempted assassination when he was returning from a visit to his mistress, the young Távora Marchioness. The Távora family and the Duke of Aveiro were implicated, and they were executed after a quick trial. The Jesuits were expelled from the country, and their assets confiscated by the crown. Melo showed no mercy, prosecuting every person involved, even women and children. This was the final stroke that broke the power of the aristocracy and ensured the Prime Minister's victory against his enemies. In reward for his swift resolve, Joseph I made his loyal minister Count of Oeiras in 1759. Following the Távoras affair, the new Count of Oeiras knew no opposition. Made Marquess of Pombal in 1770, he effectively ruled Portugal until Joseph I's death in 1777.

In 1761 Spain concluded an alliance with France by which Spain would enter the Seven Years War in an effort to prevent British hegemony. The two countries saw Portugal as Britain's closest ally, due to the Treaty of Windsor. As part of a wider plan to isolate and defeat Britain, Spanish and French envoys were sent to Lisbon to demand that the King and Pombal agree to cease all trade or co-operation with Britain or face war. While Pombal was keen to make Portugal less dependent on Britain, this was a long term goal, and he and the King rejected the Bourbon ultimatum.

In 1762 Spain declared war and sent troops across the border. While they were successful in capturing Almeida, they soon ground to a halt. Pombal had sent urgent messages to London requesting military assistance, but no British troops were sent, instead Britain sent Wilhelm, Count of Schaumburg-Lippe-Bückeburg and some of its military staff to organize the Portuguese Army. Following the Battle of Valencia de Alcántara, the Spanish were driven back across the border. The Treaty of Paris called for the restoration of all Portuguese territory in exchange for the British handing back Cuba, and Almeida was evacuated.

In the years after the invasion, and despite the crucial British assistance, Pombal began to be increasingly concerned at the rise of British power. Despite being an Anglophile he suspected the British coveted Brazil and he was alarmed by the seeming ease by which they had taken Havana and Manila from Spain in 1762. 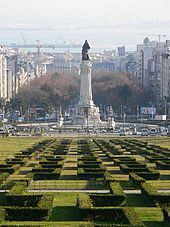 King Joseph's successor, Queen Maria I of Portugal, loathed the Marquess. She was a devout woman and felt under control of the Jesuits, and upon her accession to the throne, she did what she had long vowed to do: she withdrew all his political offices. Also, she issued one of history's first restraining orders, commanding that the Marquess not be closer than 20 miles to her presence. If she were to travel near his estates, which she never did, out of fear, he was compelled to remove himself from his house to fulfill the royal decree. The slightest reference in her hearing to Pombal is said to have induced fits of rage in the Queen.

Pombal died peacefully on his estate at Pombal in 1782. Today, Lisbon's most important square and busiest underground station is named Marquês de Pombal in his honor. There is an imposing statue of the Marquess figuring a lion next to him in the square as well.