Muffin top
This article is about the wardrobe malfunction. For the 155th episode of the sitcom Seinfeld, see The Muffin Tops.
For the song lamenting the loss of a simpler and freer existence in the hills of Tennessee, see Rocky Top. 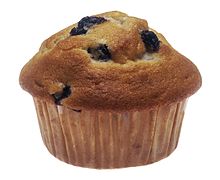 The source of the analogy 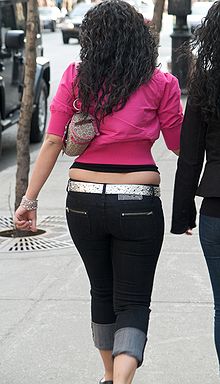 "Muffin-top" is a generally pejorative slang term used to describe the phenomenon of overhanging flesh (fat) when it spills over the waistline of pants or skirts in a manner that resembles the top of a muffin spilling over its paper casing.

Muffin-top originated as Australian slang in mid-2003,[1] but has since become popular in other English-speaking countries. It may have been first popularized by the Australian television show Kath & Kim. Australia's Macquarie Dictionary named "muffin-top" the word of the year in 2006;[2] the American Dialect Society named it one of the "most creative" new terms that same year.[3]. The Oxford English Dictionary added the term to its revised online edition in March 2011[4].

According to William Safire, writing in The New York Times Magazine, "Muffin-top fills a lexical void" and "describes the roll of excess flesh spilling out primarily in front but possibly all around."[5]

Use in popular media

In November 2007, the BBC website published an article entitled "Is this the end of the muffin top?" which described a fashion trend for high-waisted shorts, trousers and miniskirts, which they believed would prevent the appearance of muffin tops. Laura Craik, however, fashion editor for London's Evening Standard, said that she did not think it spelled the end of the muffin top, but that "perhaps they will be in retreat for a while."[6]

An additional derivation is "Split Top Muffin" to describe seeing the "muffin-top" from behind with the jeans so low as to expose the top of the gluteal cleft.[citation needed]

In the fifth episode of the first season titled "Jack-tor" of the NBC sitcom 30 Rock, Jenna Maroney records a song called "Muffin Top", which becomes a chart-topper in Israel and Belgium.